Renren (NYSE:RENN) lost 11.7% of its value in November, according to data from S&P Global Market Intelligence. After gaining nearly 50% from Sep. 1 to Nov. 1, momentum sputtered out and shares lost ground. However, even after sell-offs in November and December, the stock is still up roughly 23% over the last three months. 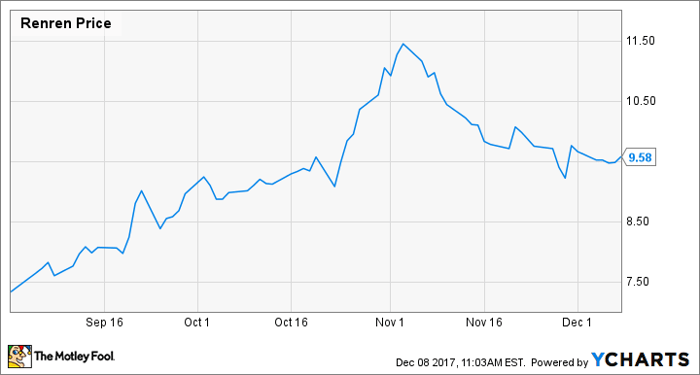 Prior to early November, Renren shares had been climbing on news that the company was progressing with plans to spin off its investment holdings into a separate equity and offer qualified shareholders a chance to exchange Renren stock for the new security.

Financial services firm BidaskClub did lower its rating on the stock from "strong buy" to "buy" in a note published Nov. 14 that corresponded with a relatively small price decline, but it looks like the movement on the stock was mostly unrelated. The company's valuation hit a year-long high in early November, and the subsequent sell-offs seem to be a case of gravity kicking in rather than the result of business news or ratings-related developments.

While the $700-million-market-cap company's most recent quarterly report showed a 68% increase for the company's social media-based advertising and value-added services (bringing sales from the segment to $12.7 million in third quarter -- or roughly 57% of the $22.3 million in sales), betting on the core platform to drive earnings growth appears to be a shaky proposition. The company is focusing on building its auto sales and financing business as a way to diversify its business and drive performance, but it appears that the stock's movement in the near future will remain closely tied to its investment portfolio.

With regard to the possible spinoff equity, Renren management has stated that no action will be taken this year. Investors should keep an eye out for an update on the situation on Dec. 22, when the company hosts its annual shareholders meeting.