Please ensure Javascript is enabled for purposes of website accessibility
Log In Help Join The Motley Fool
Free Article Join Over 1 Million Premium Members And Get More In-Depth Stock Guidance and Research
By Harsh Chauhan - Sep 12, 2018 at 9:15AM

The networking giant is all set to tighten its grip over the cybersecurity space.

Cisco's (CSCO 1.55%) cybersecurity business is getting better with each passing quarter. The networking specialist's cybersecurity revenue now exceeds many  pure-play specialists thanks to the scale of its business, and it won't be long before it establishes a viselike grip over the market.

What's even more impressive is that the networking giant's cybersecurity revenue growth has accelerated over time.

It is not difficult to understand how Cisco has managed to bump up the growth of its cybersecurity business. The company's legacy as a provider of networking equipment such as routers and switches gives it an immense advantage over pure-play rivals, since it can simply bundle its cybersecurity solutions at the hardware level.

This is what Cisco has been doing for the past few years through its "Security Everywhere" strategy. The company has been pushing its cybersecurity solutions into mission-critical areas such as networking hardware, the cloud, and endpoints, promising customers that it can better close gaps within the network to prevent, detect, or remedy attacks. Cisco's cybersecurity revenue growth shows that the strategy is working. What's more, the company is doing the right thing by lapping up smaller companies to bolster its expertise in specific cybersecurity niches and to enhance the appeal of its offerings. For instance, Cisco recently acquired Duo Security for $2.35 billion,  the latest in a line of cybersecurity-specific acquisitions made by the networking giant.

Duo adds a new dimension to Cisco's cybersecurity business thanks to its expertise in two-factor authentication. According to Verizon, 63% of data breaches are a result of using weak, default, and even stolen passwords. This is where multifactor authentication services come into play, as the user will have to authenticate access on at least two fronts.

Grand View Research estimates that demand for multifactor authentication will increase at an annual pace of 15% for the next seven years. So Cisco has entered yet another fast-growing pocket of the cybersecurity industry that should help boost its cybersecurity segment's growth and help drive greater profitability in the long run.

Cybersecurity is Cisco's fastest-growing segment, but it only provides around 5% of its total revenue. This means that the cybersecurity business isn't moving the needle in a big way for Cisco just yet, but at the same time, investors cannot ignore that cybersecurity is driving a transformation at Cisco.

This is a step in the right direction for Cisco, as recurring revenue sources generally yield higher profitability, since it costs less to service an existing customer than going out to acquire a new one. Additionally, Cisco can cross-sell any new cybersecurity features to its existing customers and boost margins, since it will be able to lower the cost of sales.

Now, there isn't any hard evidence to prove how much of a catalyst cybersecurity growth is to Cisco's margins, but there's a way to establish the positive correlation between the two. Back in 2016, cybersecurity was just 3.8% of Cisco's total revenue. As the contribution of this business to Cisco's top line has improved, so has the company's margin profile. 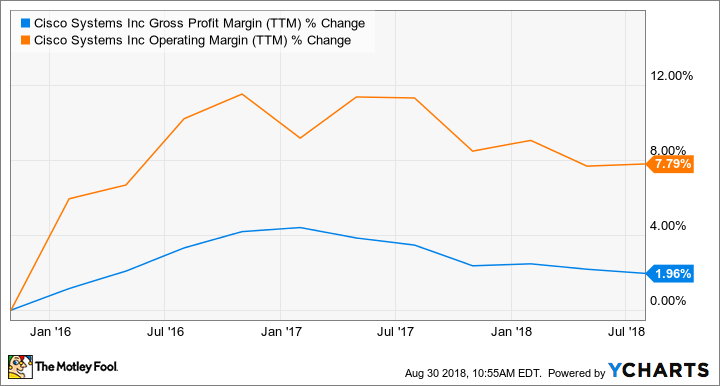 Cybersecurity could be a big driver of Cisco's growth in the long run, as the company is positioning itself to grab a bigger piece of this space by using acquisitions and its influence in networking hardware. At the same time, cybersecurity will allow the company to grow its business profitably because it has the potential to generate stronger margins. This is one of the reasons why analysts expect Cisco's earnings growth to clock a higher annual growth rate of nearly 9% over the next five years as compared to the 5.5% annual increase it has clocked in the last five.