Amazon (NASDAQ:AMZN) has always been aggressive in scaling its businesses. CEO Jeff Bezos constantly reminds employees and investors that it's still "day 1" at Amazon. That is to say, the company is still in the early growth stages of its business plan. And Amazon has quickly grown some impressive businesses: its core retail operations, its cloud-computing division, and a burgeoning advertising business.

But Amazon's business-to-business supplies site has taken off over the last couple of years. The company recently announced that the unit reached a $10 billion annual run rate, up from $1 billion in 2016. It took seven years for Amazon's consumer marketplace to go from $1 billion to $10 billion, and Amazon Web Services didn't hit $10 billion in revenue until 2016.

Amazon's business supplies sales could eventually exceed its consumer sales, according to analyst Colin Sebastian at R.W. Baird. And with a $9.4 trillion business-to-business market in the U.S. alone, that's a real possibility. 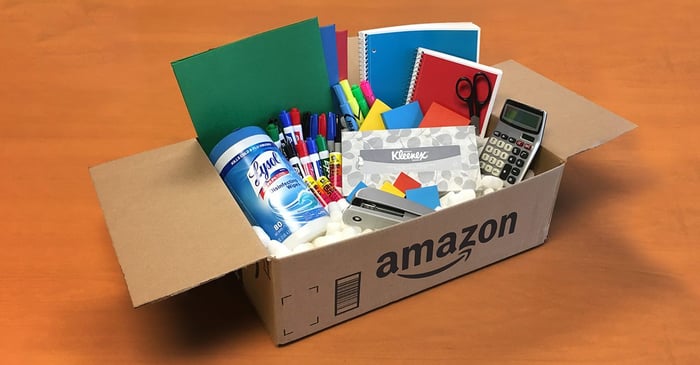 Amazon points to four main factors that have allowed it to grow quickly: its breadth of customers, international expansion, third-party sellers, and innovation.

The number of business-to-business customer on Amazon's platform has grown to "millions of businesses." Amazon loves to use vague terms like that, and there's no telling whether it has 2 million or 19 million. (It would presumably say "tens of millions" if it had 20 million or more.)

Still, Amazon is showing tremendous growth from 2016, when it started the year with 200,000 customers. It announced 1 million customers in July last year, so the number has at least doubled since then.

Amazon is also expanding the service internationally, after selling exclusively to U.S. businesses for over a year. It expanded to Germany in late 2016 and the U.K. in early 2017. It added India and Japan in late 2017, and it added France, Italy, and Spain in 2018. It's now live in eight countries, and it likely has its sights set on many more.

Expanding to new markets makes Amazon's platform more appealing to third-party sellers, which make up more than 50% of sales. Third-party sales have been a driving factor for Amazon on its consumer platform as well.

All these factors add up to more business customers in more places finding more things for sale on Amazon's marketplace and making more orders.

Opening the door for additional opportunities

The rapid growth of its business-to-business platform offers additional opportunities for Amazon. The company has been working on its own logistics business for some time, and the business-to-business market is an excellent testing ground for an Amazon delivery fleet. Delivering in bulk to businesses is generally easier and more profitable than delivering lots of small packages to consumers' doorsteps.

Establishing a logistics business could enable Amazon to scale up its business-to-business platform even more by offering faster shipping or better pricing through Business Prime. It could also attract more third-party sellers, who wouldn't have to deal with additional third parties to sell on Amazon. That should in turn attract more customers and more orders as product selection improves. Once established, Amazon could use a logistics business to cut down on its rising shipping expenses for its consumer marketplace.

Amazon has a massive opportunity in the business-to-business marketplace. As Jeff Bezos would say, it's still "day 1" when it comes to business-to-business sales. With trillions of dollars trading hands between businesses and suppliers every year, Amazon could see its business platform sales exceed the $186 billion in gross merchandise volume from its consumer platform; $10 billion is just the start.