Investing in dividend stocks is one of the best strategies for creating wealth over the long term. Their combination of stock-price appreciation and capital returns can make them an especially effective way to build and maintain a retirement nest egg.

So we asked three top Motley Fool contributors to each pick a dividend stock that they think investors with a focus on retirement would appreciate. Read on to learn why they suggested Retail Opportunity Investments (NASDAQ:ROIC), BP (NYSE:BP), and IBM (NYSE:IBM). 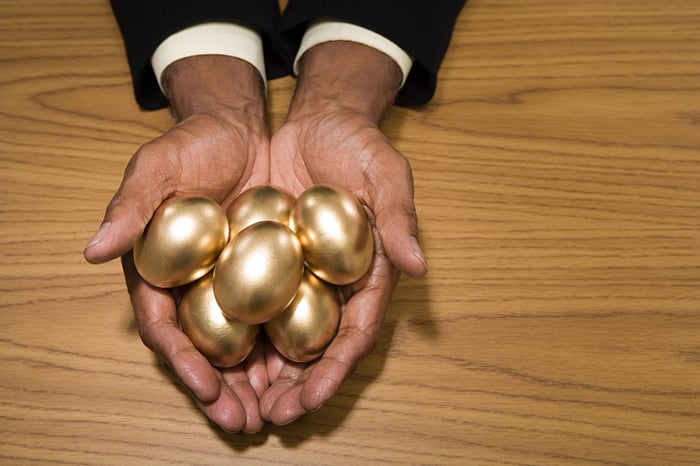 But that doesn't mean its future is in doubt. During the quarterly conference call in late July, management noted that target markets are starting to pick up again.

"While during the first half of 2018 there was considerable hesitation among buyers and sellers across our markets," explained CEO Stuart Tanz, "we are now starting to see more favorable conditions again for attractive off-market acquisition opportunities."

Still, he cautioned that Retail Opportunity Investments will remain conservative in its guidance for the time being. But coupling the company's generous 4.15% annual dividend with the fact that Tanz is the same person who shepherded Pan Pacific Retail from its roughly $150 million IPO in 1997 to a $4 billion buyout by Kimco Realty in 2006, I think now is a great time to open or add to a position in Retail Opportunity Investments.

It stands for "Beating Projections"

John Bromels (BP): OK, so "BP" actually stands for British Petroleum, but BP has been crushing expectations as the high price of oil helps it generate big profits and gobs of cash. And it looks as if the Big Oil giant is going to continue to outperform and help its investors grow their nest eggs.

For dividend investors, BP is a solid choice thanks to its almost-best-in-class yield of 5.6%. (Rival Royal Dutch Shell edges it out by a few tenths of a percent for the top spot.) Better still, the yield is solid, backed up by impressive free cash flow and solid fundamentals.

Like other oil majors, BP has switched into high gear now that crude oil prices have moved higher. In Q2 2018, the company's net income was up 1,740% year over year (yes, you read that right), clearly showing that the lean years of the oil price slump were in the rear-view mirror. If you want further proof, BP was the first of the oil majors to begin a share buyback program in late 2017, which will reward investors beyond the dividend.

Not only has BP put the past firmly behind it, but management is also making investments in the company's future. BP's Q2 acquisition of BHP Billiton's U.S. shale assets gave it additional exposure to the red-hot Permian Basin, which will help to boost the company's production even further in coming years. Investors who hop on for the ride now should see their nest eggs continue to grow far into the future.

Big Blue is cheap and offers a big yield

Keith Noonan (IBM): International Business Machines stock hasn't exactly been a hot commodity in recent years. Big Blue's share price has languished over the past decade, gaining just 22% across the stretch while the S&P 500 level has climbed roughly 130%, as declines for the company's legacy hardware and services businesses resulted in deteriorating sales and weak earnings growth.

However, IBM continued to raise its dividend -- an annual tradition that the company has kept alive for 23 years running, and the stock now offers a hefty 4.3% yield. That attractive returned-income profile looks even better in light of the company's conservative valuation (shares trade at just 10 times this year's expected earnings) and signs that the business is entering a new growth phase.

Responding to shifts in the enterprise IT market, IBM started a pivot away from hardware and toward cloud services, analytics, mobile, and security offerings -- which the company lumps together under the banner of "strategic imperatives." This process didn't happen as quickly as many shareholders would have liked, with the company recording sales declines across 22 consecutive quarters before 2018, but it looks as if Big Blue has turned the corner. Last quarter, the strategic imperatives revenue climbed 13% year over year on a currency adjusted basis to comprise just over 50% of sales -- a first for the company.

With its big yield, low earnings multiple, and the company's business finally on track to return to consistent growth, IBM is a dividend stock worth adding to your retirement portfolio.

We can't guarantee that these businesses will go on to achieve satisfactory returns or beat the broader market going forward. But whether we're talking about the impending pick-up in acquisitions for Retail Opportunity Investments, BP's prospects for continued outperformance, IBM's attractively priced stock, or the high dividend yields offered by all three companies, we believe chances are high that they'll do exactly that. And putting a piece of your retirement savings to work accordingly could mean massive financial rewards over the long term.