Apple brings its chip chops to bear in the Apple Watch.

One of the reasons Apple's (AAPL -3.00%) in-house chip-development efforts are so strategically significant is that they allow the company to custom tailor processors to serve the requirements of its products. Not only can this help Apple gain competitive advantages in the markets in which it currently participates, but the tech giant can also bring those capabilities to bear as it tries to create and shape new product categories.

When Apple released its first-generation Apple Watch more than three years ago, the device was powered by a custom-designed chip that Apple dubbed the S1. With the launch of each new Apple Watch, the company also has delivered new chip technology, which has led to dramatic performance improvements. 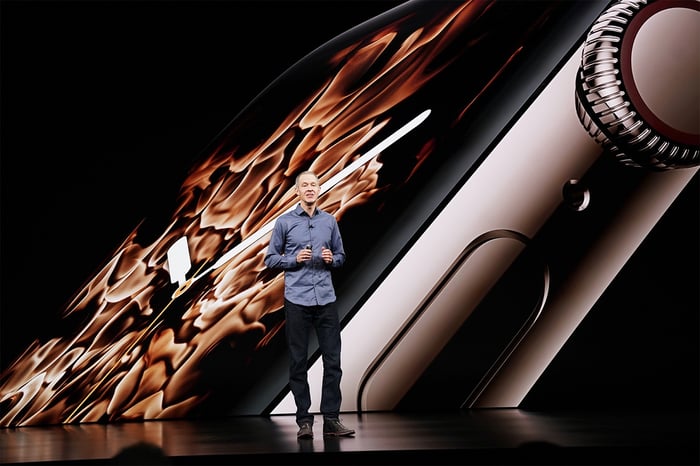 With the introduction of the Apple Watch Series 4, which is powered by a chip known as the S4, Apple may have delivered the most interesting chip upgrade in the history of the product category. Let's take a closer look.

Vertical integration for the win

According to Apple, the S2 chip inside of the Apple Watch Series 2 incorporated a dual-core processor, which Apple said boosted CPU performance by as much as 50%. The company also said that the chip received a new graphics processor, "which delivers up to two times greater graphics performance."

A mystery that remains

One thing that Apple didn't unveil was the manufacturer of the main processor that's part of the S4 chip. As you may know, Apple doesn't manufacture its own chips in-house -- it designs them and relies on third-party contract chip manufacturers to build them.

The questions that remain, then, are the following: Which company is building this chip, and which manufacturing technology is being used to craft it? Given that Apple has been relying on Taiwan Semiconductor Manufacturing Company (TSM -1.04%) to build its iPhone chips -- it's believed to be the exclusive manufacturer of the A10 Fusion, A11 Bionic, and A12 Bionic chips inside of the iPhone 7, iPhone 8/X, and iPhone XR/Xs/Xs Max devices -- it wouldn't surprise me to learn that TSMC was building the processor inside of the S4, too.