The investment bank's failure is a reminder of some of the dysfunctions in the financial and regulatory apparatus that brought the world to the edge of the abyss -- and of dysfunctions that still exist today.

Sept. 15 marked the 10th anniversary of Lehman Brothers' bankruptcy filing -- by assets, the largest bankruptcy in the history of corporate America. The investment bank's failure was a turning point in the financial crisis, shaking the financial system and the world economy to their foundations. Ten years on, here are nine extraordinary facts and anecdotes that relate to Lehman's bankruptcy.

1. Don't count your billions before they're Buffetted.

On March 28, 2008, five and a half months before Lehman went under, CEO Richard Fuld called Warren Buffett to solicit a capital infusion from Berkshire Hathaway Inc. One day prior to their conversation, someone at Lehman had already taken the liberty to prepare a letter to be circulated by Fuld to Lehman staff announcing a $3.5 billion investment by Berkshire Hathaway. According to the bankruptcy examiner's report, Fuld did not know the genesis of the letter, which took Buffett by surprise "because he never got close to a deal with Lehman." 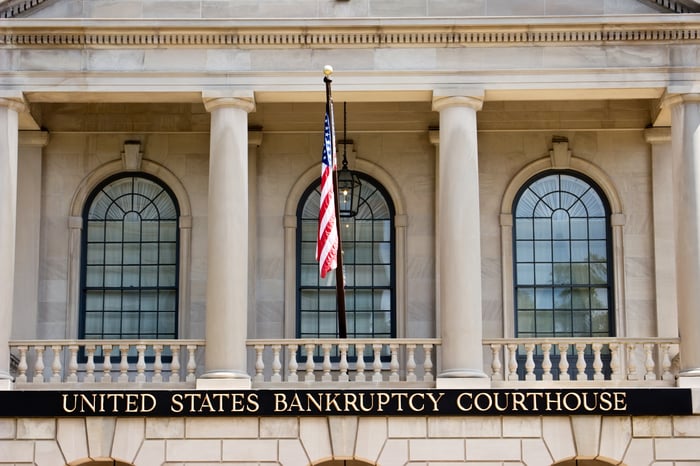 It's a common misconception that Warren Buffett's investing edge comes from insider knowledge unavailable to ordinary investors. What sort of due diligence did Warren Buffett do once Lehman approached him? He reached for a document available to all: Lehman Brothers' most recent annual 10-K report, which contained more than enough red flags to send a trained analyst fleeing from the shares. As Buffett recently told the Wall Street Journal [emphasis added]:

[Holding a voluminous printout] This is a 10-K of Lehman Brothers. This goes back a little before the panic; Lehman was looking for money at that time and they approached Berkshire, I came down to the office at night and made these little notes on here of things that were red flags and you'll see a number of pages here [points to notes on the front page of the 10-K report he is holding]. You had to get to page 150 or 200, but there was clearly a lot of trouble there. By the time I got through 'em, we decided that we were not in a position to lend to Lehman.

3. Bankruptcy can be highly lucrative -- to the tune of more than $2 billion!

By the fifth anniversary of Lehman's bankruptcy filing, the total fees paid to professional advisors (lawyers, accountants, bankruptcy advisors) involved in the bankruptcy and liquidation had exceeded $2.2 billion. One firm alone, bankruptcy consultancy Alvarez & Marsal, had then earned more than $650 million, while lawyers Weil, Gotshal & Manges had raked in more than $480 million.

4. Lehman Brothers continues to file quarterly reports to this day.

The most recent balance sheet for Lehman Brothers Holdings Inc., dated April 5, 2018 and filed with the U.S. Bankruptcy Court for the Southern District of New York, shows the shareholders' equity account with a deficit of $129 billion, and related and controlled entities bring the total to nearly $175 billion. Five days before filing for bankruptcy, Lehman published a preliminary earnings release, including a balance sheet that showed positive stockholders' equity of $29 billion.

5. The wages of failure: A mere billion dollars.

While it's true that Lehman Brothers CEO Richard Fuld still held an enormous slug of Lehman Brothers' common shares when it collapsed, he had already banked hundreds of millions of dollars by then. In a 2010 paper, three Harvard Law School academics estimated that, between 2000 and 2007, Fuld had sold shares of Lehman totaling $461 million. Adding cash bonuses over the same period, the disgraced chief executive pocketed $522 million. For the top five Lehman executives, including Fuld, the total came to a very respectable $1 billion. All honest work ought to be rewarded, of course, and destroying a 158-year-old institution while imperiling the global economy is no small achievement.

Despite this, none of these individuals -- or anyone else -- had to answer any criminal charges nor any civil charges (which carry a lower  burden of proof) in connection with Lehman's collapse. In 2012, the Securities and Exchange Commission (quietly) decided not to pursue any civil charges in the Lehman case, as reported by the New York Times.

7. Bank failures: Not so bad, all things considered.

Over the 10-year period 2008 to 2017, 521 banks failed, with aggregate assets of $712 billion. The biggest year for failures during the period was 2009. Lehman Brothers (which was not a bank holding company) filed for bankruptcy with $639 billion in assets.

Despite being dubbed "the Great Recession," the financial crisis in 2008 and 2009 paled in comparison to the Great Depression of the 1930s. In 1933 alone, approximately 4,000 commercial banks and 1,700 savings and loan associations failed.

No bank failures have occurred so far in 2018.

The catastrophic impact of Lehman Brothers' bankruptcy provided a dramatic illustration of the risk that large, interconnected financial institutions pose to Main Street. But far from seeing a reduction in the accumulation of U.S. banking assets at the top of the system, we've since witnessed an increase in this concentration.

As the Financial Times' Gillian Tett noted recently: "[t]he big beasts are even bigger: at the last count America's top five banks controlled 47 per cent of banking assets, compared with 44 per cent in 2007. ... It is unclear whether any regulators have solved that 'too big to fail' dilemma."

9. The start of a dreadful decade for the shares of Lehman's peers 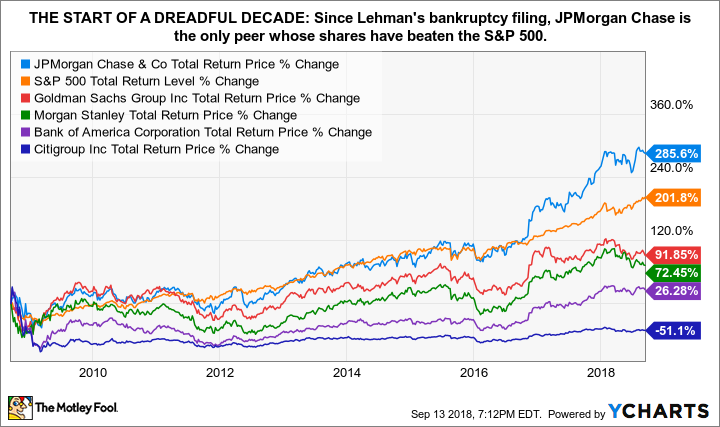 Among five of Lehman Brothers' remaining peers (Bank of America Corp, Citigroup Inc,. Goldman Sachs Group Inc., JPMorgan Chase & Co., and Morgan Stanley), just one, JPMorgan Chase, has seen its shares outperform the broad market over the near-decade since Lehman's bankruptcy filing. One of them, Citigroup, has produced a 51% loss, even when you include dividends.