A new study released by Visa Inc. (NYSE:V) shows that counterfeit credit card fraud dropped by as much as 75% from December 2015 to March 2018, thanks to the introduction of EMV chip-embedded credit cards. This is more proof that these chips are having the desired effect, and are working to curb fraudulent transactions at retailers' points of sale (POS). (Last year, counterfeit credit card fraud was down only 50% from 2015.)

During that same time period, counterfeit fraud dollars spent at all U.S. merchants dropped by 46%. As an economic crimes detective, I'm on the front lines of the war on fraud, and have seen firsthand how EMV chips have led directly to these dramatic declines.

Let's take a quick look at this technology to understand why EMV chips have proven so effective, and why that's is so important for banks, merchants, and you. 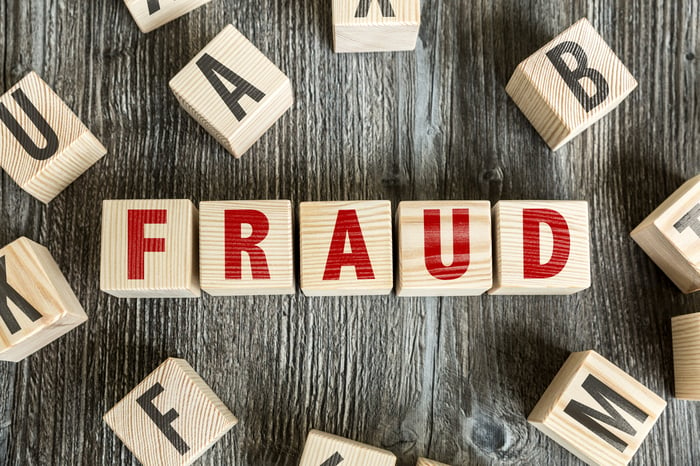 EMV chips on credit cards have reduced domestic counterfeit credit card fraud by 75% since they were introduced in October 2015. Image source: Getty Images.

Why the EMV chip migration was necessary

The EMV chip was named for its developers: Europay, Mastercard Inc. (NYSE:MA), and Visa. Cards without this chip store all pertinent data on the magnetic stripe on the back of the card, including the cardholder's name, credit card number, expiration date, and CVV number. Once the information is written on this stripe, however, it is forever static, meaning it will never change.

At a time when data breaches are seemingly everyday occurrences and gas station skimmers are rampant, this information is always at risk of being stolen by actors with malicious intent. And once this information gets in the wrong hands, it is notoriously easy for fraudsters to sell it on the dark web and make counterfeit credit cards with this information encoded on the back. What made these counterfeit credit cards especially effective, was that they could be embossed with the fraudster's real identity on the front so that, even when an especially alert clerk asks to see the swindler's identification, it would show the exact same name displayed on the front of the credit card.

The EMV chip changed the whole dynamic of card payments at the POS. While that information is still stored on the back of the card, the EMV chip generates a unique code, each time it is used in a transaction, which means thieves cannot produce counterfeit cards and use them at a merchant that uses chip-reading hardware.

Given the EMV chip's capabilities, it's easy to see why counterfeit credit card fraud has dropped so much at U.S. retail locations since the end of 2015. More than 3.1 million merchant locations now accept EMV chip card payments, a 680% increase since the EMV migration occurred in October 2015. This represents about two-thirds of all U.S. retail storefronts. The number of chip cards in circulation has also dramatically increased. According to Visa, in June it almost had 500 million chip cards in the U.S. Before the migration, there were "only" 159 million in circulation. That's good for a 214% increase and represents about 69% of all domestic Visa cards.

Of course, this doesn't mean we're out of the woods when it comes to credit card fraud. While EMV chips have worked wonderfully for the purpose for which they were created and their adoption by the retail and credit card industries has been as successful as hoped, there are still several other types of prevalent fraud that the EMV chip was never designed to combat. Most notably, of course, this includes fraudulent online transactions where credit card numbers are usually manually input for payment purposes. Gas station pumps also do not have to be EMV-compliant until Oct. 1, 2020, one of the reasons why skimmers are still a big problem at gas stations.

What you can do to protect yourself

First and foremost, use credit cards as much as possible. Consumers are awarded more legal protections when using credit cards than almost any other type of payment, including cash, checks, or debit cards.

Secondly, monitor your accounts and credit report regularly. When checking your accounts, make sure all the activity can be personally verified. You obviously only want to see accounts you have personally opened listed on your credit report. Federal law guarantees that all consumers can access their credit report for free once per year at annualcreditreport.com. However, many services, including certain bank and credit card accounts, now offer this monitoring service for free, and it could be beneficial to shop around and find out if something makes sense for you to subscribe to.

Finally, you may want to consider initiating a fraud alert or credit freeze with the credit agencies. A credit freeze is the more effective option, as it makes it impossible for any creditor to access your credit report, and prevents fraudsters from opening new credit accounts in your name. Of course, this same feature will also be an inconvenience for you if you need to open up a new credit account while it is frozen.

EMV chips have been a runaway success for preventing counterfeit credit card fraud at the point of sale, which is exactly what they were designed to do. This doesn't mean, however, that consumers can stop being diligent when it comes to protecting their personal information.