The bull argument for memory chip maker Micron Technology (NASDAQ:MU) revolves around demand. Cloud computing, the Internet of Things, self-driving cars, and artificial intelligence will all create massive new sources of demand for the company's products in the coming years. One example: Micron expects fully autonomous cars to require 74 GB of DRAM and 1 TB of NAND each by 2025. Multiply that by millions of cars, and you get a sense of the opportunity for the chip company.

But here's the thing: Demand on its own doesn't tell you anything about how Micron will fare. Memory chips are commodities, and prices fluctuate based on the interplay between supply and demand. When there's an oversupply of chips, prices can plunge to the point where Micron loses money. Looking at demand alone only gives you half the picture.

A look at the past decade should convince you that new sources of demand don't guarantee great results for Micron. 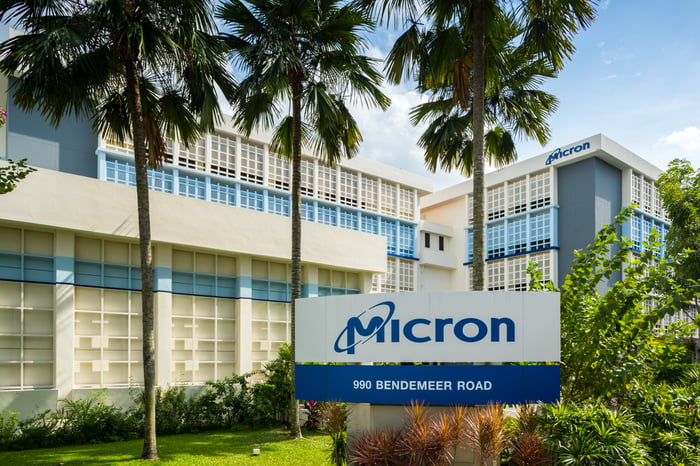 In 2007, the year that saw the launch of the original iPhone, 100 million smartphones were sold globally. Smartphones at the time weren't very smart. The market was dominated by Nokia, and devices came with very little memory. The original iPhone had just 128 MB of RAM and as little as 4 GB of storage.

A decade later, the number of smartphones sold each year has increased by factor of 15 to about 1.5 billion. Not only has the number of devices exploded, but so has the quantity of memory per device. The latest iPhone XS, announced earlier this month, comes with 4 GB of RAM and at least 64 GB of storage. That's a 32-fold and 16-fold increase, respectively.

If there was ever a massive new source of demand for memory chips, it was the boom in smartphone sales over the past decade.

Surely, Micron should have benefited greatly from this strong demand environment. It did -- in some years. In others, the company lost money, or barely turned a profit. Here's a look at Micron's annual net income since 2008: 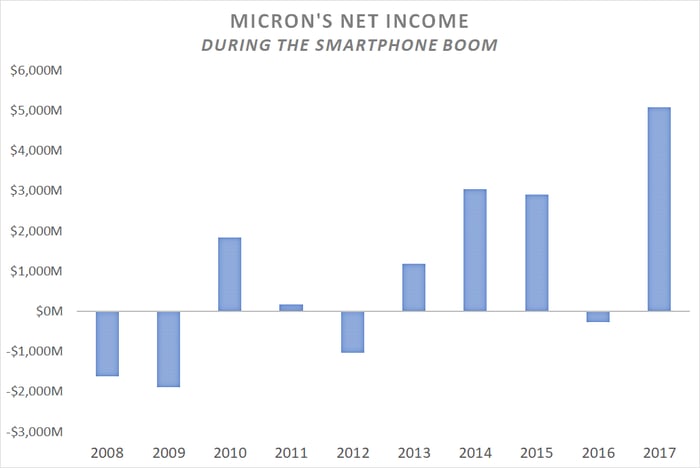 In 2007, Micron could have said the same thing about the smartphone market that it's saying today about the data center and autonomous car markets. And it would have been right: Demand for memory chips for mobile devices has soared. But the company still lost money in 4 of the past 10 years despite that surging demand, with losses as recently as 2016.

Shares of Micron have plunged over the past few months as analysts have begun warning about memory chip oversupply. Prices for NAND chips have already fallen hard, down nearly 50% since peaking in 2017, according to Reuters. DRAM prices could be next, although the timing and severity of any downturn are impossible to predict.

Micron has earned record profits over the past year as prices for DRAM chips surged. The company recorded $12.2 billion of net income on $28.1 billion of revenue in the trailing 12-month period. To put that into perspective, Micron's cumulative net income from fiscal 2008 through 2017 was just $7.8 billion. That's how powerful this memory supercycle is.

These record profits aren't sustainable. Exactly how much they fall in a downturn is anyone's guess. Maybe they're cut in half. Maybe they turn into gigantic losses on par with past downturns. It depends on how far and how fast DRAM prices fall, and how quickly Micron can cut its per-bit costs as it tries to keep up. The first is a wild card. The second is information that Micron used to disclose but stopped late last year.

Micron's performance during the smartphone boom was dictated by supply and demand, not demand alone. I doubt that dynamic will change as new sources of demand ramp up in the coming years.