Please ensure Javascript is enabled for purposes of website accessibility
Log In Help Join The Motley Fool
Free Article Join Over 1 Million Premium Members And Get More In-Depth Stock Guidance and Research
By Nicholas Rossolillo - Updated Sep 17, 2018 at 8:38AM

New games and more convenient food options are on the way, and initial results are positive.

After getting stuck in a slump for the better part of a year, shares of Dave & Buster's Entertainment (PLAY 3.48%) have been showing signs of life once again. A slide in foot traffic persists but is slowing down, and new locations are performing well.

This isn't a typical restaurant chain; Dave & Buster's operations lie somewhere between theme park and dining establishment. With that in mind, new CEO Brian Jenkins is overseeing some new developments to cement D&B's status as a go-to entertainment hub for a new generation of video game enthusiasts.

During the second quarter of 2018, foot traffic at existing locations fell once again -- albeit at a slower 2.4% rate than the 4.9% decline reported in the first quarter. When factoring in new openings in the last 12 months, that led to strong top- and bottom-line growth.

Operating costs remain elevated as D&B opens more stores, particularly in new markets. For example, Dave & Buster's debuted its first location in Utah last quarter. A total of 14 to 15 new stores will have opened by year's end, representing 13% to 14% unit growth. Eleven of these openings will still utilize D&B's large-square-footage format rather than the newer small-format footprint. Management said that its batch of new locations from 2017 -- which are not included in the comparable-store figures yet -- are performing well.

As far as specific operating results, comparable food and beverage sales fell 4.1% during the second quarter, while comparable-store sales for amusements fell 1.2%. Management blamed rising competition, as well as cannibalization from new D&B openings in existing markets. I would argue that the latter isn't necessarily a bad thing in the long run. Who wants to wait in long lines for arcade games?

VR and better food is the way of the future

Operating expenses are also rising due to new developments in gaming and food. The company's first foray into the world of virtual reality (VR) occurred in the second quarter with the release of Jurassic World VR Expedition. Jenkins said the game is a big hit and helped with the sequential improvement in traffic and comp sales relative to the first quarter. D&B's second VR title will be released later this year. The goal is to build an extensive VR portfolio in the coming years, with a focus on proprietary content.

The next VR title and two other non-VR marquee games are in the works, but management isn't ready to release any names. The initial success with Jurassic World was enough to go ahead with a pipeline of development to keep D&B's arcades cutting edge. At about $5 per play on Jurassic World, the new game is crowding out spending on some older arcade titles, but it's still driving a net gain in revenue. 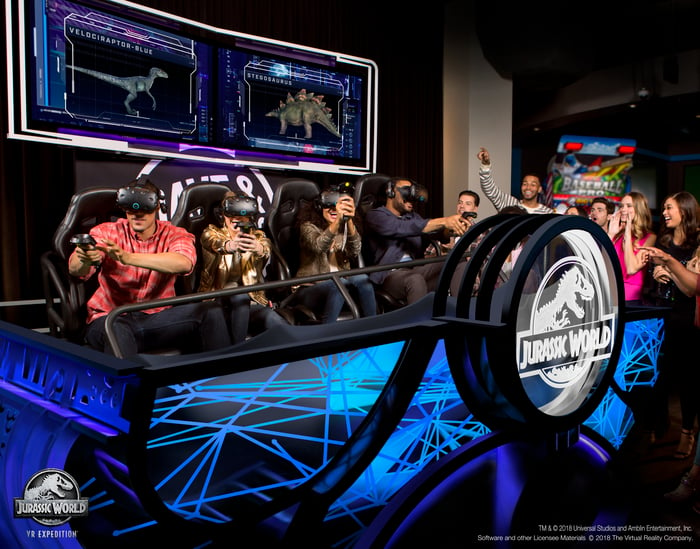 With the restaurant side of the business still creating the biggest drag on results, D&B is making some aggressive changes on that front as well. A new menu recently debuted with fewer options but an upgrade on quality aimed at "enhancing flavor and cravability." Simplifying preparation has also been a focus. However, as Jenkins pointed out on the call, D&B is an entertainment hub, so repeat restaurant visits from consumers are infrequent. The company is getting creative with its use of space in its stores and is going to try some new approaches around food, more along the lines of a theme park.

For example, the company will use a room in a D&B store in Dallas to test a new food truck-style experience called TNT Tacos. Since many guests are all about gaming and don't want the casual dining experience, the hope is that gaming outings will be paired with a quick bite to eat, helping to offset the slide in foot traffic.

Dave & Buster's has always occupied a unique niche within the restaurant industry. However, with D&B's addition of VR games and some fresh thinking on dining, investors might need to start thinking about the company as less of a restaurant and more of a mini-theme park. After second-quarter results finally showed some improvement in the numbers, maybe that's a good thing.