The Atlanta Braves look to be playoff-bound in 2018, while demand for space in The Battery Atlanta has been strong. Both factors should unlock more upside for Liberty Braves stock.

Six months ago, I explained why Liberty Braves (BATRA 0.43%) (BATRK 0.26%) -- the Liberty Media tracking stock for the Atlanta Braves professional baseball team (and some related businesses) -- looked like an attractive investment opportunity. Benefits from a new stadium, an improving team, and a growing real estate development surrounding the stadium seemed poised to boost Liberty Braves' value.

Since then, Liberty Braves stock has gained about 12%, which is comfortably ahead of the S&P 500's return. And it's not too late for investors to jump on board. The team's strong 2018 performance and solid demand for space in The Battery Atlanta real estate development are creating plenty of upside for the stock. 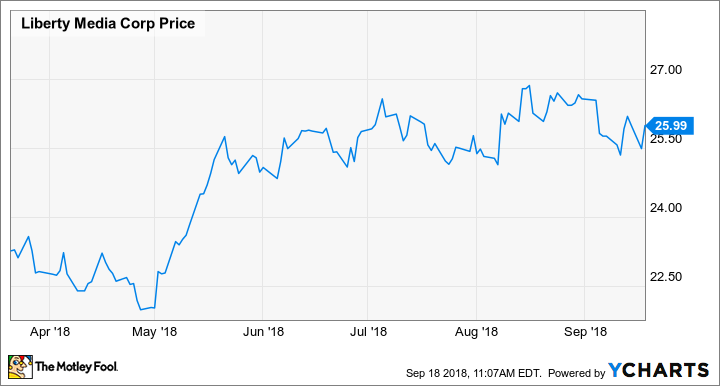 The Braves have surpassed expectations

Entering this season, the Atlanta Braves hadn't had a winning record since 2013 -- and hadn't even been close since 2014. I hoped for solid improvement in 2018, but still expected fairly mediocre results.

Instead, the Braves improved dramatically compared to last year, thanks to a handful of players performing better than expected, along with a huge contribution from top prospect (and Rookie of the Year contender) Ronald Acuna, Jr. With less than two weeks to go in the regular season, Atlanta holds a 6.5 game lead in the NL East division. That makes the team a virtual lock to make the playoffs for the first time since 2013.

The Braves' impressive play has driven a modest 2% to 3% uptick in attendance per home game. Revenue per home game rose 7% in Liberty's second quarter. This was a solid result given that much of the league has been facing attendance declines -- especially because attendance had already surged 24% in 2017, thanks to the opening of the Braves' new stadium, SunTrust Park.

Making the playoffs would lead to some extra revenue for Liberty Braves. More importantly, it should energize the team's fan base, boosting interest ahead of the 2019 season and potentially enabling the team to raise ticket prices. Having a competitive team will also boost the Braves franchise's value, estimated at $1.625 billion by Forbes earlier this year.

The Battery Atlanta development is a huge success

There has also been plenty of positive news over the past six months for Liberty Braves' real estate efforts. Demand for the residential component of the development was very strong. Liberty Braves has decided to cash out of the residential buildings, and management projects a stellar internal rate of return of 22% on that investment. The company has also continued to expand its development plans for The Battery Atlanta while identifying tenants for the few remaining available spaces. Last month, the Braves announced that a 140-room Aloft Hotel will open on the property in 2020, complementing the 264-room Omni Hotel that opened in early 2018.

In July, ThyssenKrupp Elevator selected one of the few remaining open parcels to build a new North America headquarters, including a test tower that will be 420 feet high. This facility is scheduled to open in 2022 and will be home to more than 900 employees.

Meanwhile, Liberty Braves has been filling out the roster for its retail spaces. For example, in the last six months, it has signed leases with an upscale movie theater, a small grocer, an escape room, a "virtual-reality experience center," an outdoor retailer, and a nail salon.

In short, Liberty Braves appears to have added value by creating a vibrant mixed-use live-work-play community: the holy grail for real estate developers today. That should drive strong long-term financial returns for every component of the development.

While the Atlanta Braves have performed far better than expected on the field this year, the team should be able to keep improving in 2019 and beyond. About 30% of the team's 2018 payroll was tied up in two players who didn't appear in a single game for the Braves.

As a result, the team should have at least $35 million available to spend in free agency during the 2018-2019 offseason. Some of that may be needed to bring back the Braves' own free agents, but there should be enough money left over to bring in a couple of solid contributors.

Furthermore, Atlanta continues to have one of the best farm systems in the league, with nine prospects ranked among the top 100 in baseball. Several of these players will be Major League-ready at some point next season, providing another boost for the Braves.

This strong talent pipeline should enable the Braves to field a reliably competitive team in the coming years without breaking the bank. That will get fans excited about the club, paving the way for further ticket price increases. Furthermore, the Braves' current below-market TV deal expires in 2027, so there will likely be a massive jump in revenue a decade from now. That will drive higher profits while also allowing for a higher payroll -- which will help the team keep its star players.

With the Atlanta Braves improving faster than expected on the field and The Battery Atlanta real estate development gaining traction, Liberty Braves stock looks just as enticing as it did six months ago.

Why I'm Betting on the Atlanta Braves