PayPal (NASDAQ:PYPL) has been very slow to monetize Venmo, its mobile-first peer-to-peer payments app. It's controlled the company for five years, and it's grown payments volume on the app to $46.4 billion on a trailing-12-month basis. But PayPal's revenue from that mountain of payments is still minuscule compared to its more mature flagship product.

Interestingly, PayPal's original product started off with a similar business as Venmo (hence the name). PayPal eventually shifted toward more business-to-consumer transactions, which enabled it to monetize payments by acting as a processor for merchants. PayPal plans the majority of Venmo's revenue to come from business-to-consumer transactions as well thanks to its Pay With Venmo feature, according to CFO John Rainey.

That stands in stark contrast to Square (NYSE:SQ) which has rapidly expanded the consumer financial services it offers in Cash App -- its peer-to-peer payments app. Square sees a big opportunity to grow revenue from those services rather than offering just another method of payment at merchants. 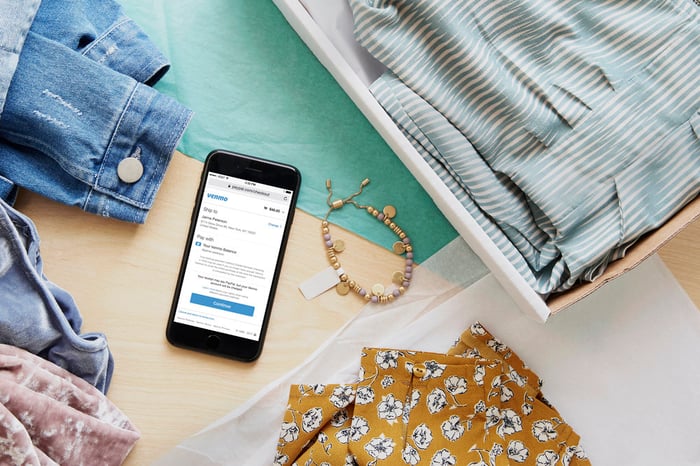 PayPal hasn't entirely ignored Square's strategy. After Square offered customers instant withdrawals from the Cash App to their bank account for a fee, PayPal added the option to both Venmo and PayPal.

Square has found a lot of success with instant withdrawals, and it recently increased the fee to 1.5% from 1%. PayPal, comparatively, charges just $0.25 regardless of how much you want to transfer. That pricing indicates that the company doesn't feel the service offers significant potential for revenue. Instead, it's using it to keep customers from switching to Square. Still, Rainey says instant withdrawals are Venmo's primary source of revenue at this point in time.

Venmo also followed Square into offering a prepaid debit card. Square called out the interchange fees it receives on each debit card swipe as a meaningful source of revenue in the second quarter. Cash Card users are spending at a $3 billion run rate, according to management, and Square is encouraging Cash Card spending through cash-back offers.

Again, PayPal doesn't see its Venmo debit card as a meaningful source of revenue. It seems to only offer it as a means to get more users to sign up and use their Venmo accounts. Importantly for PayPal's business-to-consumer strategy, a prepaid debit card encourages users to keep a balance in their Venmo account. That could ultimately increase the take rate for PayPal if and when a consumer does use Venmo to buy something from a merchant using Pay With Venmo.

As Square continues to add functionality to Cash App, it's becoming more popular than Venmo. PayPal has been largely reactive to Square's successes, instead of proactively finding ways to get users to sign up for Venmo, engage, and keep a balance in their account. Unless that changes, investors could see payments growth slow considerably.

Pay with Venmo will cannibalize PayPal

Another important point for PayPal investors to consider with the company's Venmo strategy is what success looks like. Ultimately, PayPal will cannibalize itself if users and merchants start adopting Pay With Venmo. Checkouts that used to go through PayPal would instead get routed through a Venmo account.

Management has expressed that it sees benefits in the strategy. Most notably, Venmo users are much more likely to carry a balance in their accounts, which could increase PayPal's take rate on transactions. It's a lot less expensive for PayPal to use funds already in a users account than to process a credit card, for example.

Until a few years ago, PayPal would require users to use their PayPal balance before using a card for online payments. It would also encourage users to link a bank account and set it as the default payment option, so PayPal could use less expensive ACH transfers instead of processing payments cards.

The company moved away from that strategy over the last couple years, and management has touted the many benefits of the changes it's made on its business. But it wants to effectively do the same thing all over again with Venmo. In other words, cannibalization may provide some short-term benefits to revenue, but it could hurt operations in the long term.

PayPal's strategy with Venmo appears to be confused and unclear. It's losing ground to Square, which has pushed more and more services into its payments app and is generating meaningful revenue from them. With Venmo volume climbing above 10% of PayPal's total payment volume, PayPal needs to figure out its monetization strategy as well as a way to combat Square's efforts.