Profiting from widespread global use of marijuana could result in pot stocks with valuations of more than $100 billion someday.

Shares in marijuana stock Tilray (TLRY) are surging on optimism it could capture a significantly larger share of the emerging marijuana market. Its market cap is already flirting with $20 billion, but that could still undervalue this company's opportunity if a recent projection by Tilray CEO Brendan Kennedy pans out.

In an interview with Jim Cramer on CNBC, Kennedy speculated there will be multiple $100 billion companies in this industry someday. If he's right, Tilray could be one of them, but I think it's more likely that Aurora Cannabis (ACB -6.75%), Canopy Growth (CGC -8.94%), and Aphria Inc. (NASDAQOTH: APHQF) will get there first.

The sky's the limit once Aurora Cannabis Aurora Sky is complete. A 600,000-square-foot state-of-the-art facility, Aurora Sky could produce 8,000 kilograms per month as early as January 2019. 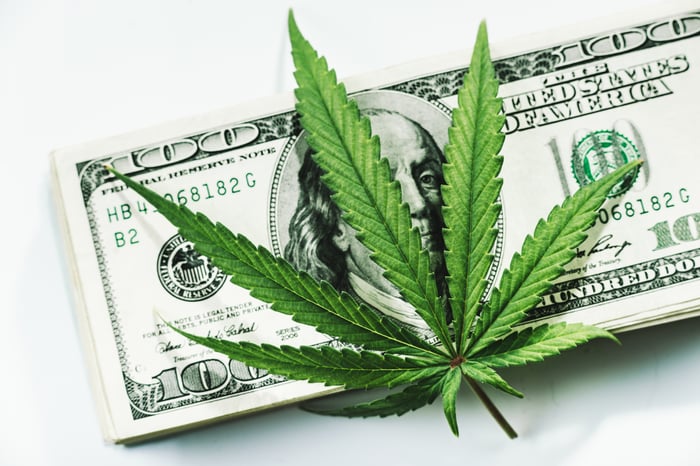 Aurora Sky isn't Aurora Cannabis' only facility, either. It's already producing at Aurora Vie, and its funded projects include Aurora Nordic and Aurora Sun. Overall, the company boasts 570,000 kilograms of funded annual marijuana production, not including additional capacity that it can add from other expansion projects and acquisitions. Earlier this month, the company secured a $250 million credit facility from Bank of Montreal (BMO -0.44%) to help it on that front.

So far, Aurora is arguably the biggest marijuana player in terms of production capacity, and that could position the company perfectly to supply global demand if momentum accelerates for marijuana legalization. The company believes it's got the biggest international footprint, and given that the United Nations values the global marijuana market, including black-market sales, at $150 billion, the opportunity ahead of it could be big.

Aurora's acquisition of MedReleaf also positions it well to benefit from high-margin, high-value medical cannabis products, including soft gel capsules and liquids. It's anyone's guess how successful trials will be, but studies evaluating marijuana could result in medical marijuana products that generate billions of dollars annually in revenue. For perspective, global spending on medicine worldwide totaled $1.1 trillion (yes, with a "t") in 2017, according to IQVIA.

Until the big run-up in Tilray's share price, Canopy Growth held the moniker of marijuana's largest company by market capitalization. Tilray has surpassed it, but its $11 billion plus valuation still ranks it as the industry's second-largest business.

Like Aurora, Canopy Growth has invested considerably to increase production capacity, and currently, it estimates it can produce more than 500,000 kilograms of marijuana per year.

That should give Canopy Growth plenty of cannabis to meet demand once Canada's recreational market opens for business next year. According to Deloitte, sales of marijuana to adults in Canada could eclipse $1.8 billion in 2019. Coupled with medical marijuana sales, Canada's marijuana market could be valued at $11 billion in 15 years, according to Constellation Brands (STZ 0.82%), a beer, wine, and spirits Goliath that owns 38% of Canopy Growth.

Canopy Growth currently has about 30% market share in Canada's medical marijuana market, and over the past year, it has inked supply agreements throughout Canada that could allow it to capture a similar share of the recreational market. If Constellation Brands' 15-year forecast is correct, then Canopy Growth's revenue in Canada could exceed $3 billion in the future, and that's just Canada. The company's investments in other countries that are legalizing marijuana, including Germany, could add billions of dollars more in sales. Germany's population is more than twice as big as Canada's, and last quarter, Germany contributed 14% of Canopy Growth's sales. That's pretty good given that Germany's medical marijuana market has only been up and running since 2017.

Aphria has less cannabis production capacity than Aurora and Canopy Growth, but projects could increase its capacity to about 250,000 kilograms next year, and that could be enough to make it Canada's third-largest cannabis grower.

Like that of its peers, Aphria's revenue could grow substantially in the coming year because of Canada's recreational market. To tap into this opportunity, the company has inked an agreement with one of the country's biggest alcohol distributors, Great North Distributors, a subsidiary of Glazer's, a North American distribution giant.

The company's footprint should be big enough to win meaningful sales in Canada, and it should also be large enough to take advantage of emerging markets in Europe. It's already exporting marijuana to Germany and laying groundwork in the United Kingdom, where changes should ease access for medicinal use. According to Arcview, the U.K. could be the second-largest European marijuana market behind Germany by 2022.

Aphria is also in rarified air among its peers because it's one of the most profitable of Canada's marijuana companies. One reason that its production capacity is smaller than that of competitors is that it has taken a more cautious approach to spending on acquisitions, and that's allowed more money to drop to the bottom line. As you can see in the following chart, Aphria has delivered earnings per share over the past 12 months, while Aurora and Canopy have posted losses. 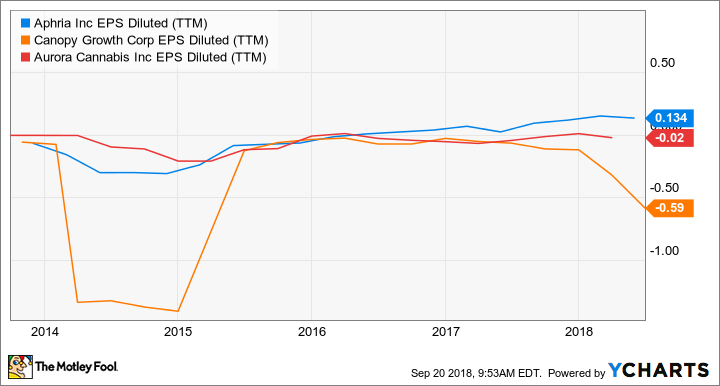 A bump up in spending could dent Aphria's future earnings, but spending doesn't necessarily have to come entirely from operating cash flow. It can raise money for expansion and acquisitions in other ways too. For example, it could sell some of itself to a major beverage player like Canopy Growth did, or it could work out a deal with a bank for financing like Aurora.

Is $100 billion even possible?

The argument for companies growing into such a large valuation might be supported by the success enjoyed by alcohol and tobacco companies. Those mature markets boast multiple companies with market caps north of $100 billion, including the tobacco giants Altria (MO 1.03%) and Philip Morris (PM 2.53%), which have market caps of $117 billion and $128 billion, respectively, and beer maker Anheuser Busch InBev (BUD -0.92%), which has a $179 billion market cap.

Obviously, there's no guarantee that legal marijuana will become as big a business as tobacco or alcohol, but if countries, including the U.S., embrace cannabis broadly, then I think long-term investors could wind up seeing a marijuana company eclipse the $100 billion market cap threshold someday. Unfortunately, there's no way of knowing which company will be the next Philip Morris or Anheuser Bush, so perhaps the best way to invest in this industry is by owning multiple companies, including Aurora Cannabis, Canopy Growth, and Aphria.