Ferrari's new CEO backed off his predecessor's profit goal -- but his growth plan is still ambitious.

Ferrari (RACE 0.55%) said that it plans to introduce 15 new models, including a range of hybrids and an SUV-like vehicle, as it aims to double its earnings by 2022.

In the company's annual Capital Markets Day presentation on Tuesday, new CEO Louis Camilleri lowered Ferrari's long-term profit guidance slightly from the ambitious goal set by his predecessor. But he emphasized that the company has a plan already underway to maintain its recent strong profit growth. 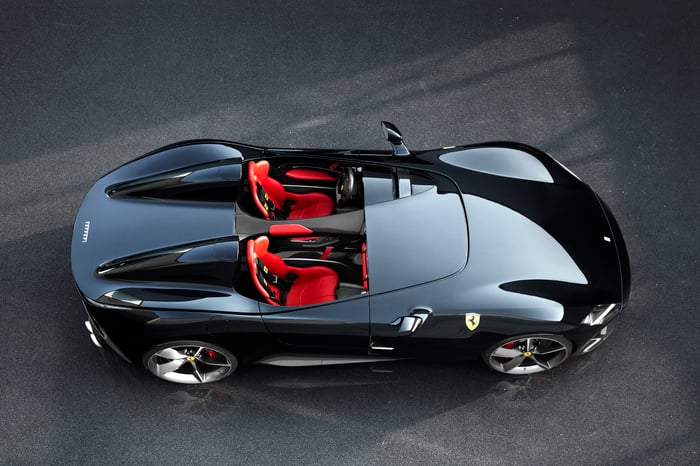 The new Ferrari Monza is the first of a series of new super-exclusive Icona models intended to boost the company's margins. Image source: Ferrari N.V.

Ferrari just updated its guidance for the next few years

Ferrari (like other automakers) uses "adjusted" to mean "excluding one-time items." Adjusted earnings numbers are thought to give a better view of the performance of the business over time.

"Industrial" is Ferrari's term for debt and cash flow attributable to its core businesses: automaking, racing, and the sale of engines and other parts. Put another way, it excludes cash and debt related to the company's financial-services unit.

"Net industrial debt" is Ferrari's term for debt, minus its cash on hand and receivables. It stood at 472 million euros as of the end of the second quarter of 2018. Not counted in that calculation: Ferrari also has 500 million euros in available credit lines.

Got all that? Now let's look at the very detailed guidance that Ferrari gave on Tuesday.

Ferrari's new guidance is both more and less aggressive

Here are the financial targets that Ferrari is aiming to hit in 2020 and 2022. I've included its actual 2017 results for comparison. Note that all financial figures are in euros.

As you can see, Camilleri has backed off a bit from the profit goal set by his late predecessor in February. But there's good news on one other front not shown in the table: Ferrari said that it now expects to be free of net industrial debt by 2020. That said, the revenue, margin, and overall growth goals are still very ambitious, especially given that emissions regulations are tightening around the world, and Ferraris are not exactly green cars.

How Ferrari will deliver on those financial goals

Ferrari's product plan also anticipates tightening emissions and fuel-consumption rules in its key markets: the U.S., China, and the European Union. Ferrari plans to make much wider use of hybrid technology across its portfolio in order to ensure that it can still offer its iconic internal-combustion engines while complying with these stricter regulations.

Is this going to work?

I think it will work, if -- and this is a big "if" -- the global economy cooperates. Because of its high prices, small annual volumes, and wealthy clientele, Ferrari is probably less vulnerable to a downturn than major automakers. But a steep recession between now and 2022 could leave it short of its growth goals by the end of the period.

So how should investors view this, then? Ferrari's stock isn't cheap at around 38 times earnings. That's a rich valuation even for a luxury-goods company, never mind an automaker. Still, when a 70-year-old company with some of the best margins in its business says that it will roughly double its profits over the next four years while improving its margins further, it's worth taking note.

Long story short, I think there's a very good chance that Ferrari will deliver on these ambitious profit-growth goals -- if not by 2022 then soon after. If it does, I think there's room for the stock price to increase nicely by then. Just be aware that the ride from here to there could be bumpy.