5G technology could change the world, but carriers have to build networks that support it first.

If you've been following the wireless industry for the past couple of years, you've undoubtedly heard management and analysts talk about 5G. It is the next generation -- the G in 5G -- of wireless technology and is expected to bring with it faster speeds, lower latency, and the ability to connect to more devices at once.

The introduction of 4G technology fundamentally changed how people used their wireless devices. Apps such as Uber or Snapchat wouldn't exist without it, and forget streaming music or videos in HD without the leap forward in speed provided by 4G.

But 5G holds the potential for yet another significant leap forward, allowing developers to build on the technology with applications for the Internet of Things, cloud gaming, augmented reality, virtual reality, and autonomous vehicles. 5G speeds may also allow carriers to challenge cable companies with in-home broadband, providing consumers with an alternative source for high-speed internet.

Naturally, Verizon Communications (VZ 0.44%), AT&T (T 2.08%), T-Mobile (TMUS 2.76%), and Sprint (S) are all fighting to establish a 5G network first. Whichever company offers a reliable 5G-capable network could win big contracts from private and public enterprises looking to take advantage of the technology, and it could win a first-mover advantage with consumers as well. Each carrier is leveraging its existing holdings to develop its next-generation networks, each with its own strengths and weaknesses.

Here's where each carrier stands in the race to 5G. 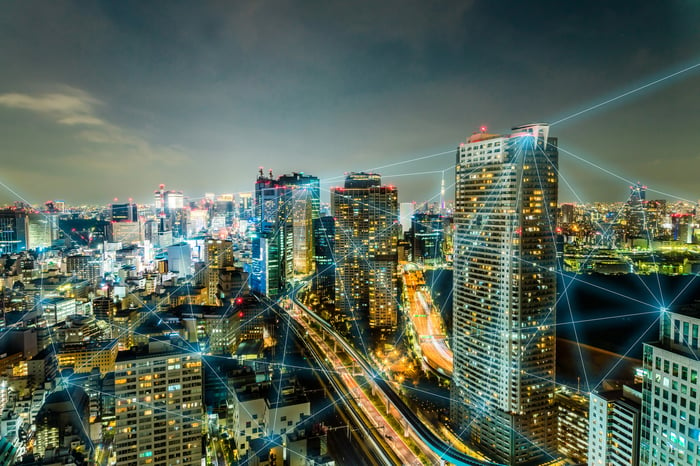 The network will run on Verizon's millimeter-wave spectrum in the 28 GHz and 39 GHz bands. These wavelengths offer unparalleled speed and low latency using 5G encoding, but the ability to travel long distances and penetrate buildings is limited compared to lower frequencies used with 4G technology. As such, Verizon's in-home broadband service will require professionally installed on-premise equipment; the company plans to move to self-installed equipment next year.

Verizon acquired Straight Path Wireless for $3.1 billion last year, bringing with it the largest holding in millimeter-wave spectrum licenses. As a result, Verizon holds 76% of available 28 GHz spectrum in the top 50 markets and 46% of the available 39 GHz band.

The carrier has been testing 5G connections over those frequencies for some time now, and it's confident in its ability to deliver stable connections to a fixed location. The next step will be to create mobile connections, and Verizon plans to use its millimeter-wave spectrum holdings for a fully mobile 5G service as well. Verizon is certainly in a strong position, but it needs a hefty amount of spectrum and plenty of cash flow to deploy its strategy.

Verizon's approach of getting a commercial product into people's homes as quickly as possible is going to be very capital intensive. It's launching before the rest of the industry is ready, so it has to hire contractors to install on-premise equipment. Its reliance entirely on millimeter-wave spectrum also means it will have to install a lot of small cells (data processors that are attached to utility poles or inside buildings) to provide good coverage, especially as it shifts to mobile connections from fixed connections. That said, starting with fixed in-home connections will allow it to provide faster return on investment capital than if it built a wireless network and waited for customers to migrate to 5G devices.

AT&T expects to launch a 5G mobile network in 12 cities by the end of the year and plans to add seven more cities in early 2019. Its network, similar to Verizon's, will rely on its millimeter-wave holdings in the 39 GHz band. Consumers won't have 5G-capable handsets before the end of the year, so AT&T will sell a hotspot device called a puck, which will pick up the 5G signal and connect to handsets via Wi-Fi.

In the meantime, AT&T has been building out the foundation technology to support the eventual arrival of 5G speeds in what it calls "5G Evolution." That groundwork will be in 400 markets by the end of the year. AT&T is using techniques like expanding the number of simultaneous signals each radio can receive and transmit (4x4 MIMO), using multiple bands of spectrum to carry signals faster (carrier aggregation), and integrating advanced signal processing techniques (256 QAM) to increase the speed and bandwidth of its current cell sites. All of that technology should lead to substantial improvements in speed, bandwidth, and latency, but it's not quite a 5G network.

AT&T's 39 GHz spectrum holdings put it in a good position spectrum-wise. It owns 30% of the band in the top 50 markets. The capital intensity of building out a 5G network using millimeter-wave spectrum and small cells may weigh on the company, however, as it's also working to feverishly pay down its massive debt load. That debt could potentially hinder how quickly AT&T builds out its 5G network. Management seems confident it can do both (and keep raising its dividend year after year), but at some point, something's got to give.

While the T-Mobile and Sprint merger has yet to be approved, T-Mobile's management already sees a path forward using Sprint's spectrum assets. T-Mobile holds a small amount of spectrum in the 28 GHz band -- about 12% in the top 50 markets -- which could be used in a similar manner to Verizon and AT&T's millimeter-wave plans.

But unlike its competitors, T-Mobile advocates using all bands of spectrum -- low, mid, and high -- for its 5G network. T-Mobile is already deploying 5G technology on the 600 MHz spectrum it bought at auction last year. The lower-frequency band is better at traveling distances and penetrating buildings, allowing T-Mobile to get greater coverage with fewer cell sites, which is why management says the company will have a nationwide 5G network by 2020 (with or without Sprint). The low-band spectrum, however, doesn't offer the same level of speed or low latency as millimeter-wave spectrum.

Sprint, meanwhile, has a stockpile of 2.5 GHz midband spectrum, which it's currently rolling out with both LTE and 5G technology. Sprint's key strategy with the 2.5 GHz spectrum is "Massive MIMO," a technique that enables the network to process multiple inputs and outputs simultaneously by using a lot of antennas, effectively increasing speeds and decreasing latency. Sprint's management says 2.5 GHz is the "sweet spot" for massive MIMO.

If and when Sprint and T-Mobile join forces, they'd have an enviable spectrum position. The significant amount of synergies the two could realize over the next five years or so could open up a lot cash flow, enabling the combined company to build out the network faster than either could separately. Additionally, T-Mobile could also be a big bidder in the forthcoming millimeter-wave spectrum auction, enabling it to shore up its position with high-band spectrum to supplement its 600 MHz plan.

Even if T-Mobile is able to win the race to a nationwide 5G network using its 600 MHz spectrum, it will have to continue investing in deploying spectrum in mid- and high-bands in order to reach the same level of speed offered by Verizon and AT&T's millimeter wave-based networks. That means T-Mobile's need for capital isn't going to slow down anytime soon. The company has shown strong free-cash-flow growth over the last couple years, however, despite heavy network investments. Investors can expect that to continue, especially if the merger with Sprint goes through, providing the scale and spectrum it needs to compete.

Each carrier is barreling down the runway toward deploying 5G networks. Consumers will start to see the first commercial products available in the next few months, and it won't be much longer before they will have access to a nationwide 5G network if they want it. Of course, most consumers will need to upgrade to 5G-capable devices to take advantage of the change.

Even as we get closer to real 5G networks, the work is only getting started for these carriers. 4G was introduced at the start of the decade, and carriers are still working to improve that technology and their networks. These early 5G networks certainly aren't the endgame for carriers, and we should see continued evolution in the technology and its capabilities as carriers and developers determine the best uses for it.