Ferrari (NYSE:RACE) made it official this week: It's developing an SUV -- or at least, a new model that is intended to appeal to some people who might want an SUV.

Sacrilege? You might think so. After all, Ferrari's jewel-like sports cars are everything that a big, clunky SUV usually isn't. Is Ferrari throwing away 70 years of hard-won exclusivity for a temporary bottom-line boost?

Ferrari says that it isn't. In a briefing for investors this past week, Ferrari executives said that the vehicle they have under development is a true Ferrari, albeit one with some capabilities that will be new to the Italian supercar brand.

In fact, they're so confident that it will be a true Ferrari that they've already named the new vehicle "Purosangue," Italian for "thoroughbred."

The new Ferrari Purosangue is still a few years away from launch, so naturally the company's executives aren't sharing many details yet. But they did reveal a few details during the briefing -- and maybe more importantly for investors, they told us why they think they need to launch such a vehicle. 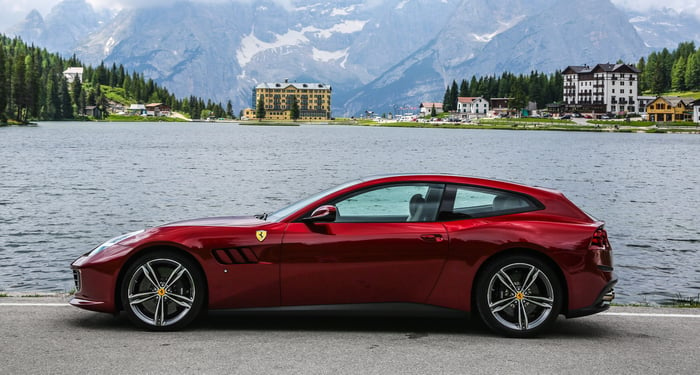 Ferrari crept closer than it ever had to the idea of an SUV with the GTC4Lusso, an all-wheel-drive model with seating for four adults. It's now working on an actual SUV that will arrive in 2022. Image source: Ferrari N.V.

What it is: A Ferrari that is aimed at luxury SUV buyers

"I abhor hearing SUV in the same sentence as Ferrari," CEO Louis Camilleri said. "It just does not sit well with our brand and all that it represents. And that's why this vehicle we will produce will be unique in so many ways and will redefine expectations. Unmistakably Ferrari, with features that have never been seen before."

Camilleri said that as a die-hard Ferrari fan, he was skeptical when he first heard about the project. But now having seen the concept, he's a "hugely enthusiastic supporter." Here are the key details that he and his colleagues revealed about the Purosangue during the investor briefing:

That last point isn't as radical as it sounds. Ferrari has been dabbling with hybrid technology for several years, not only with road cars, but in racing: Current Formula 1 race cars are hybrids.

The Purosangue will be just one of several new Ferraris to use hybrid drivetrains. Ferrari believes that, when properly implemented, hybrid drivetrains can improve performance and enhance the driving experience -- while reducing fuel consumption.

Last but not least, Ferrari promised that the Purosangue will have the best performance in its segment, and be the most "fun to drive" as well.

But why is Ferrari intent on building an SUV?

The business case for the Ferrari Purosangue SUV

This new Ferrari SUV is one piece of a larger plan to boost the company's earnings significantly over the next several years.

In a nutshell, Ferrari is aiming to roughly double its adjusted earnings before interest, tax, depreciation and amortization (adjusted EBITDA), from 1 billion euros in 2017 ($1.18 billion at the current exchange rate) to between 1.8 billion and 2 billion euros in 2022. It'll get there by increasing both its revenue and its profit margins, and it plans to do that by offering a series of new products.

Some of Ferrari's new products will be intended to boost the company's already very high margins, by tempting Ferrari's established customers to buy more (and more expensive) cars. Others will be intended to draw new customers to the brand, to increase Ferrari's annual sales somewhat. Ferrari sold 8,398 vehicles in 2017, and while it hasn't disclosed its sales goals, it probably wants to raise its annual sales to around 12,000 by 2022.

Ferrari's effort to draw new customers to the brand is focused on what the company calls "gran turismo" vehicles ("grand touring" in English). In Ferrari's usage, a gran turismo is a fast, luxurious road car that generally has seating for more than two people. It's distinct from "sports cars," which have harder-edged high performance, minimal luxuries inside, and seating for just a driver and a single passenger. 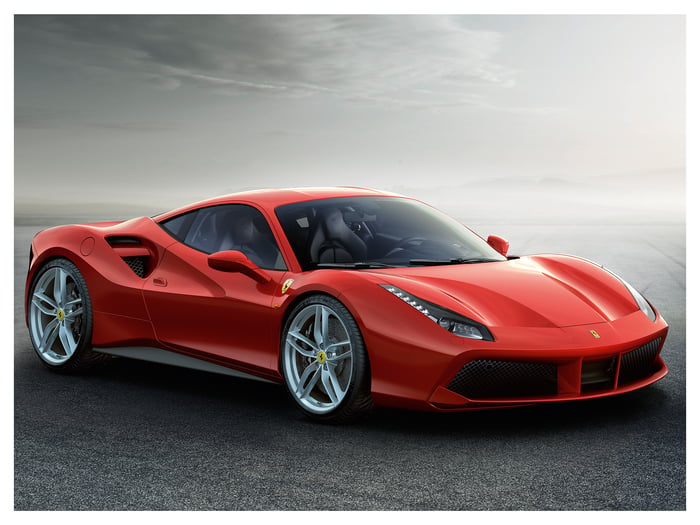 Ferrari refers to its mid-engine, two-seat 488 as a sports car. It's distinctly different in intent from Ferrari's gran turismo models, like the GTC4Lusso, pictured above. Image source: Ferrari N.V.

In any event, SUVs are where the market's growth is coming from, and Ferrari thinks it needs to have something to offer clients who want one. Ferrari notes that while sales of luxury-performance vehicles have grown significantly in the last few years, much of that growth has come from increased sales of SUVs.

To sum up: Why Ferrari will launch an SUV

Here's the takeaway for investors and others interested in the business case for a Ferrari SUV:

Long story short: Ferrari thinks it has something special and unique to offer well-heeled customers seeking a high-performance vehicle that is also an SUV. We'll have to wait a few years to find out more than that.