Shares of New Age Beverages Corp. (NASDAQ:NBEV) were falling today in a correction following the stock's jump yesterday on news that it would launch a new lineup of cannabidiol-infused beverages. Shares of New Age skyrocketed 80% yesterday to $7.85, adding to gains from earlier in the week, as the company said Wednesday that it plans to unveil a range of CBD-infused beverages at the National Association of Convenience Stores show in Las Vegas from Oct. 7 to 10.

New Age shares actually continued to gain this morning, peaking shortly after the market opened at $9.99, but then gave up gains along with much of the cannabis sector, and were trading down 18.6% as of 2:50 p.m. EDT, or down more than a third from their peak earlier in the trading session. 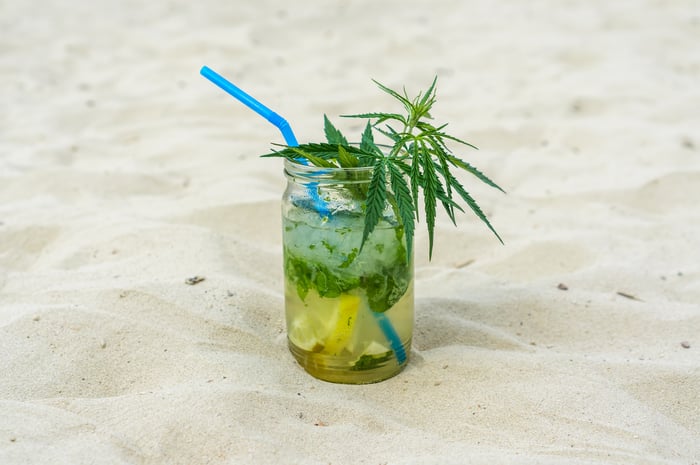 Shares of New Age, which makes ready-to-drink tea, coffee, kombucha, energy drinks, and other products, were trading at just $1.59 a week ago. The stock has soared 300% over the last week on extraordinarily high volume as rumors broke about the CBD drink launch and also that Coca-Cola might make a bid for the company.

At this point, the stock is trading at six times trailing sales and is still operating at a loss, meaning that there's plenty of investor optimism already baked into the stock.

Several other beverage companies have expressed interest in the cannabis market, including Constellation Brands, which spent $4 billion on a 38% stake in Canadian marijuana grower Canopy Growth, and Coca-Cola itself. New Age is still a small company with just $50 million in annual sales, so it doesn't have near the distribution reach of a business like Constellation or Coca-Cola. However, that means the company could be an attractive acquisition target if its CBD beverage launch is successful.

Keep an eye the stock during the Vegas conference in a couple of weeks. Until then, it should continue to be volatile, along with the rest of the cannabis sector.