A company that received a $46-per-share offer a month ago can now be had for $33 and change as of this writing. Welcome to the 2018 stock market.

Shares of Yum China (YUMC 4.00%) -- the sole licensee of KFC, Pizza Hut, and Taco Bell in that country -- dropped as much as 20% after a buyout offer from Hillhouse Capital was abandoned. When I said I was cheering on management's rejection to being taken private, I didn't have this kind of stock price reaction in mind. Nevertheless, while you can't effectively argue with Mr. Market, you can bet on his shortsighted irrational behavior. Yum China's bull case is far from dead, so recent developments could be spelling opportunity for those with a longer outlook.

In August, Yum China was approached by a group of investors led by Hillhouse and was apparently offered $46 a share to be taken private. Management reportedly rejected that offer, which I argue is a good move over the long term. Hillhouse and friends have since stopped pursuing a deal.

However, it seems the potential buyout was keeping shares of Yum China propped up after a disappointing second-quarter report. With the short-term catalyst removed, investors resumed their myopic focus on headwinds KFC and Pizza Hut are facing in China, and the stock tanked as a result.

Yum China's stock has turned ugly, but Hillhouse calling off its pursuit isn't necessarily a bad sign. Remember, the private investor was willing to pay a big premium, something it would be willing to do only if it thought it could recoup that amount plus a lot more. Management would reject an offer only if it thought its long-term potential exceeded such an offer.

It's true that second-quarter results weren't great. Sales at existing KFC stores were flat year over year, and Pizza Hut continues to struggle with a 4% decline. Revenue and earnings increased 12% and 16%, respectively, riding total system sales gains from 372 new KFCs and 87 new Pizza Huts opened in the last year. 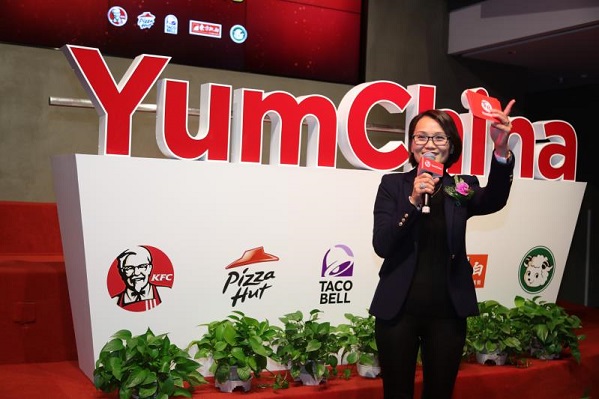 Thus, while negative foot traffic and higher labor expense negatively impacted average location profitability, it still makes sense for Yum China to open new locations at a fast pace. Pizza Hut needs improvement (operating margin is now only at 3.9%), but KFC is still very profitable and the company is able to pick up plenty of new sales in a fragmented and fast-developing restaurant industry in the world's most populous country. Plus, Yum China owns a handful of other local brands it can build out and develop, too -- assets that may come in handy down the road as the restaurant operator tries to cater to an increasingly nationalistic consumer.

The stock still looks a little rich when using the P/E ratio. Price to earnings currently sits at 26.7, but price to free cash flow -- cash left over after basic operations and capital expenditures are paid for -- is a mere 13.6 after the recent decline. The company has no debt and a $1.54 billion cash hoard to continue developing new operations.

Shares could continue their recent decline if Yum China shows another quarter of weakening sales in the third quarter, especially at its beleaguered Pizza Hut stores. However, for those in it for the long haul, now looks like a good time to make a small initial purchase or add to an existing position after this most recent dip.