On Sept. 21, Apple's (AAPL 1.89%) iPhone XS and iPhone XS Max finally hit store shelves. Inside of these devices (as well as the iPhone XR, a lower-cost iPhone that's slated to become available on Oct. 26) is a chip that Apple dubs the A12 Bionic. Apple revealed during its product launch keynote that this chip is built using a 7-nanometer technology. The manufacturer is almost certainly Taiwan Semiconductor Manufacturing Company (TSM -1.16%), since it's the only company currently mass-producing 7nm chips.

Thanks to a teardown report from TechInsights, we now have another key piece of information about the A12 Bionic -- the chip's area is 83.27 square millimeters. 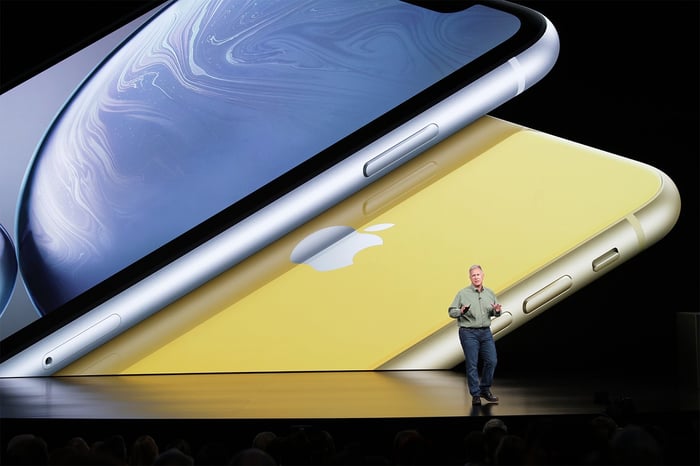 Let's take a closer look at what we can glean from these two pieces of information.

The power of chip manufacturing advances

This means that Apple managed to pack 83 million transistors per square millimeter in the A12 Bionic, up from 49 million in the prior-generation A11 Bionic, which was built using TSMC's 10nm technology. That's a nearly 70% boost in transistor density.

Compared to previous A-series chips, the A12 Bionic is actually quite small; it's the smallest A-series chip since the A4 that debuted in 2010.

The likely reason that it's small is that, all else being equal, manufacturing yield rates of smaller chips are generally higher than those of larger chips. Moreover, even if you normalize for yields, a smaller chip will be cheaper to produce than a larger chip (because for a fixed wafer cost, a smaller chip will yield more chips). It's not surprising, then, that for its very first 7nm iPhone chip, Apple played it conservatively with respect to chip size.

It's also important to keep in mind that even though the A12 Bionic is relatively small, Apple was able to dramatically increase transistor count over the A11 Bionic, thanks to the increased transistor density of TSMC's 7nm technology. This will enable the generation-over-generation performance and feature improvements that Apple advertised.

It's very likely that Apple will continue to use some variant of TSMC's 7nm technology to produce next year's A13 chip. I expect that since Apple knows that TSMC's 7nm technology will have matured by the time it is ready to bring the A13 into production, the company's chip designers will have a bigger transistor (and, by extension, area) budget to work with next year. Indeed, if you look at the table above, Apple used noticeably more chip area in the A10 Fusion than it did with the TSMC-built variant of the A9, which used the same 16nm process technology.

TSMC said on its most recent earnings call that it expects to put its 5nm technology into mass production in the first half of 2020. It seems highly likely that Apple will be one of the first, if not the first, companies to make use of that technology for its 2020 iPhone lineup.