You've probably seen the incredible gains racked up by some of the largest Canadian marijuana stocks in recent weeks. The market caps of several of these stocks are now so great that even investors with the most optimistic views about the prospects for the cannabis industry are leery of buying.

But I think that there still are quite a few good picks that can reward investors over the long run from the cannabis boom without paying through the nose. You just need to focus on companies on which the spotlights haven't burned so brightly.

In my view, that means looking at small-cap stocks that target the U.S. market. Here's why I think CannaRoyalty (OTC:ORHOF), Liberty Health Sciences (OTC:LHSIF), and Planet 13 Holdings (OTC:PLNH.F) are three small-cap marijuana stocks operating in the U.S. market that could be humongous winners. 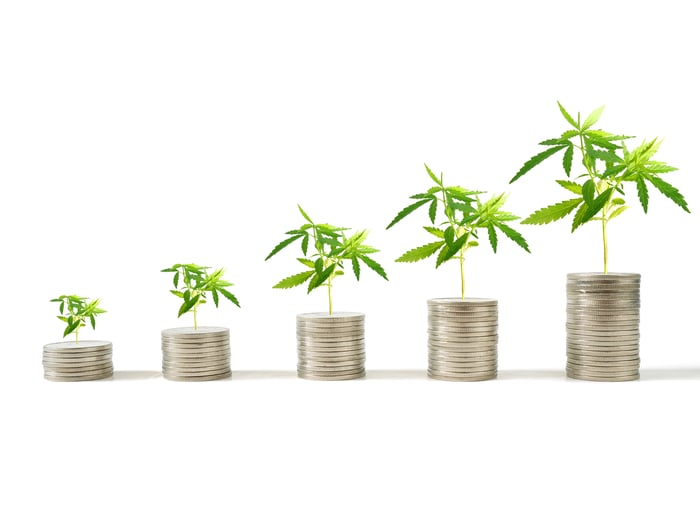 I wrote last month that CannaRoyalty was the best under-the-radar marijuana stock I've seen so far. Although the company is headquartered in Canada, it focuses primarily on the U.S. cannabis market. CannaRoyalty is up more than 30% so far this year, giving it a market cap of a little over $300 million. I think it could go a lot higher than that.

CannaRoyalty is the largest cannabis distributor in California. Although California's recreational marijuana market got off to a shaky start this year, the future for the industry looks bright. Arcview Market Research and BDS Analytics project that the cannabis market in California will total $7.7 billion by 2022, up from around $3 billion last year. California is and will be the biggest legal marijuana market in the world, by far -- and CannaRoyalty is in the driver's seat when it comes to distribution of cannabis products.

What investors might not realize is that being at the center of the cannabis distribution network gives CannaRoyalty keen insight into which products are most successful. The company has used some of that information to its advantage by acquiring cannabis brands, including cannabis flower, edibles, and vaping products.

I think that CannaRoyalty is poised to grow significantly as the California market increases over the coming years. The company also is looking to expand its operations into Nevada, which also has a rapidly growing cannabis market.

Like CannaRoyalty, Liberty Health Sciences is a Canada-based cannabis company with nearly all of its operations in the U.S. Liberty is one of 14 licensed medical cannabis producers in Florida, which is expected to become the No. 3 marijuana market in the U.S. over the next few years. That ranking puts Florida above several states that have legalized recreational marijuana. Florida currently only allows the legal use of medical cannabis.

One thing that I like about Liberty is that its business extends vertically from cultivating to running dispensaries to home delivery. The company already has a 40,000 square-foot production facility and is in the process of building another 250,000 square-foot facility that will be the largest in the state of Florida.

Liberty Health Sciences CEO George Scorsis estimates that the company currently claims a market share of around 15%. However, he's confident that Liberty's share will increase to 25% or more in the near future. Assuming that Scorsis is right, Liberty could be well on its way to annual sales of $450 million, based on projections for the Florida medical cannabis market. The company's current market cap, by the way, is only around $320 million.

But Liberty Health Sciences isn't limiting itself to Florida. The company plans to expand to other states with a heavy focus on medical cannabis, such as Massachusetts, New Jersey, Ohio, and Pennsylvania. The combined marijuana markets in these four states give Liberty a pathway to more than double its addressable market.

Planet 13 Holdings hopes to blaze a trail in an entirely new market -- marijuana tourism. The company plans to launch its Planet 13 Superstore in November, the first cannabis entertainment complex in Las Vegas (and as far as I know, in the world.)

It's hard to describe in just a few words what this cannabis entertainment complex will include. Suffice it to say, it's going to be grandiose, in keeping with its Las Vegas location. Although regulations don't allow cannabis dispensaries to be on the Las Vegas Strip (the famous stretch of upscale casinos and hotels), Planet 13 still has a prime spot just off of the Strip right next to a pedestrian sidewalk that leads to several of the most popular resorts. The company will heavily promote its Superstore through billboards on the Strip, tourist-oriented magazines, radio, social media, and building relationships with cab drivers.

Planet 13 projects that around 2,000 people will visit its Superstore each day, spending roughly $75 per person on the company's cannabis products (admission will be free). Those numbers seem realistic based on the company's experience with its current dispensary, which is located several miles from the Las Vegas Strip. If Planet 13 meets those projections, the company should generate annual revenue in the ballpark of $55 million from this one store. Planet 13 also has its eyes on other potential markets for building cannabis entertainment complexes in the future.

Beacon Securities analyst Doug Cooper thinks that Planet 13 is "better positioned to capitalize on the potential of Las Vegas and Nevada markets than any other marijuana producer," and gave an $8 price target for the stock -- roughly four times greater than its current price. I'm not sure if the Las Vegas Superstore will justify this valuation by itself, but I have a hunch that the founders of Planet 13 -- both of whom have entrepreneurial backgrounds and experience in city government in nearby Henderson, Nevada -- are onto something big.

These small-cap marijuana stocks definitely aren't for everyone. As long as marijuana remains illegal at the federal level in the U.S., these stocks will carry higher risks than many investors will prefer. But for aggressive investors looking for ways to capitalize on the growth in marijuana markets, CannaRoyalty, Liberty Health Sciences, and Planet 13 could be better alternatives than most of the big marijuana stocks with outrageous valuations.