Please ensure Javascript is enabled for purposes of website accessibility
Log In Help Join The Motley Fool
Free Article Join Over 1 Million Premium Members And Get More In-Depth Stock Guidance and Research
By Beth McKenna – Sep 23, 2018 at 11:48AM

Lithium stock investors will soon have the opportunity to own the largest pure play of the "white oil" listed on a U.S. stock exchange.

FMC Corp. (FMC -0.06%) is separating its lithium business from its core agricultural chemicals business, with the first leg of the parting coming up in October.

Investors have known for some time that the Philadelphia-based company had plans to do this, but it was only late last month when FMC filed with the Securities and Exchange Commission (SEC) for an initial public offering (IPO) that more details came out.

Here are five things you should know about FMC's lithium IPO and spinoff. 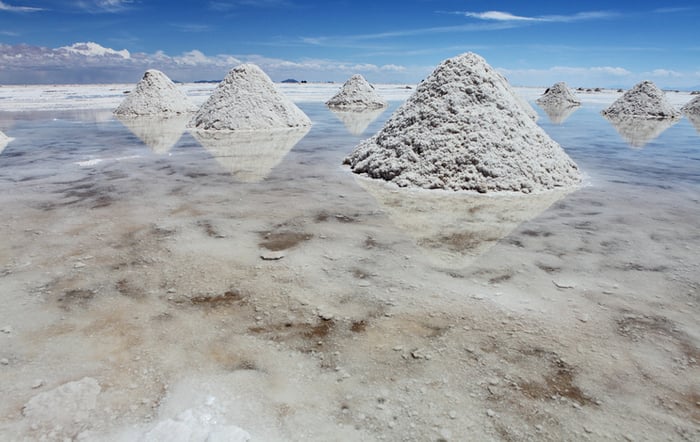 FMC's lithium business will be named Livent Corp. -- which is a play on the chemical symbol for lithium, "Li." The stock will trade on the New York Stock Exchange (NYSE) under the ticker symbol LTHM.

2. Logistics of the separation into two companies

FMC's separation of its lithium business from its agricultural technology business will occur in two parts:

So investors have two ways to invest in the new lithium company -- directly or indirectly by buying FMC stock.

On that note, shares of FMC are in the red 4.6% in 2018 through Sept. 21, versus the S&P 500's 11.1% return, which we can primarily attribute to concerns among some investors that a lithium glut could occur and drive down prices. Over the three-year period, the stock remains a big winner, with a return of 147% -- 2.5 times the broader market's 59.2% return. Investors poured money into lithium stocks in 2016 and 2017 amid rising demand and prices for lithium, largely driven by an increased need for compounds to make the rechargeable batteries that power electric vehicles. Shares also got a boost last year from FMC's acquisition of a portion of the crop protection business at the former DuPont, now known as DowDupont.

3. Livent will be the largest lithium pure play trading on a major U.S. stock exchange

Livent will give investors in the U.S. an opportunity to invest in a pure-play stock of a major lithium producer.

Both the world's largest and second largest producers of lithium, North Carolina-based Albemarle (ALB 1.50%) and Chile-based Sociedad Quimica y Minera de Chile, or SQM (SQM 0.86%), respectively, are listed on the NYSE, but neither is a pure play. China's Ganfeng Lithium, FMC, and China's Tianqi Lithium round out the top five players, though not necessarily in that order.

Following is a snapshot of FMC's lithium business in the second quarter.  These numbers, of course, will change in the three-plus-month period between the end of Q2 and the Livent IPO.

FMC's lithium business is highly profitable. In the second quarter, its profit margin -- on an EBITDA basis -- was 47.5%.

For context, in the second quarter:

Paul Graves, who leads FMC's lithium business, will be the CEO of Livent; Gilberto Antoniazzi, CFO of FMC's agricultural solutions business, will be CFO; and Pierre Brondeau, FMC's CEO and board chair, will also chair Livent's board.