Stocks retreated from record highs set last week as worries about trade with China came back to the fore. The Dow Jones Industrial Average (DJINDICES:^DJI) and the S&P 500 (SNPINDEX:^GSPC) both lost ground.

Two merger situations that have been the subject of discussion for months were in the news today, with Comcast (NASDAQ:CMCSA) winning an auction for Sky and Sirius XM Radio (NASDAQ:SIRI) and Pandora Media (NYSE:P) agreeing to a merger. 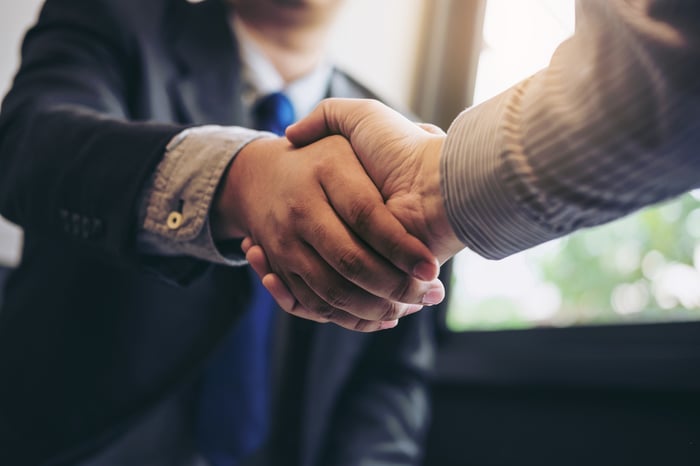 The competition between Twenty-First Century Fox (NASDAQ:FOX) (NASDAQ:FOXA) and Comcast for the assets of Sky was mostly resolved this weekend after Comcast won an unusual auction held by British regulators for the right to make an offer to Sky's shareholders. Comcast submitted the winning bid of 17.28 British pounds, or $22.64, beating Fox's final bid of 15.67 pounds ($20.53). Investor concern over whether Comcast overpaid sent its shares down 6% on the news.

Comcast and Fox have been in a bidding war for the British pay-TV operator since December 2016, when Fox initially bid 10.75 pounds per share. Both companies value Sky's combination of distribution and content assets, which include original programming and rights to sporting events, as well as a streaming capability to go with its European distribution network.

Not all of the loose ends have been wrapped up yet, due to the fact that Fox, which is selling a major portion of its assets to Disney, still owns 39% of Sky. In a press release on Monday, Fox was coy about whether it would tender its shares, saying it is "considering its options." Fox and Disney may be angling for Comcast's minority holding of streaming service Hulu.

Fox was in the unusual position of essentially bidding against itself, with the higher bids for Sky raising the value of its portion of the company, a fact that Fox wryly alluded to in its press release, saying, "Sky is a remarkable story and we are proud to have played such a significant role in building the incredible value reflected today in Comcast's offer."

Sirius XM and Pandora Media will be cementing their long-term relationship, with the satellite radio company buying the shares of Pandora it doesn't already own in a stock-for-stock deal worth about $3.5 billion. Shares of Pandora fell 1.2% to $8.98 on the news, but those of Sirius XM sold off, dropping 10.3% to close at $6.26.

Sirius XM will buy the approximately 85% of shares of the music-streaming company it doesn't already control as a result of a deal for convertible preferred stock the companies struck last year by giving Pandora shareholders 1.44 shares of newly issued Sirius XM shares for each Pandora share. Based on today's closing price, the offer values shares of Pandora at $9.01. The deal has a "go-shop" provision that allows for Pandora to search for a better deal if it wishes.

The companies touted the advantages of the combination, citing cross-promotional opportunities between Sirius XM's 36 million subscribers, many of whom are listening to satellite radio in their vehicles, and the 70 million monthly active users of Pandora's online streaming service. The merger brings together Sirius XM's financial stability and Pandora's large audience and ad-supported model.

The deal is expected to close in the first quarter of 2019, and both companies reiterated their guidance.