Here's why the newly public start-up stands out in a crowded field.

Investors have been kicking the tires of Chinese electric-vehicle maker NIO, Inc. ( NIO -11.19% ) since it went public in the U.S. on Sept. 12. The price was near the bottom of NIO's hoped-for range, but it was enough to give the Shanghai-based company a valuation of about $6.4 billion.

NIO, which offers upscale battery-electric vehicles with a focus on performance, has billed itself as an up-and-coming rival to Tesla ( TSLA -6.42% ). It has heavyweight backing and has already begun sales of its first mass-produced vehicle, a zippy battery-electric SUV.

But while NIO's stock has risen a bit since its IPO, the offering raised less cash than the company had expected. That raised some questions about investors' appetite for electric-car makers that aren't run by Elon Musk. Is NIO for real, and where is it headed? Here's what we know so far. 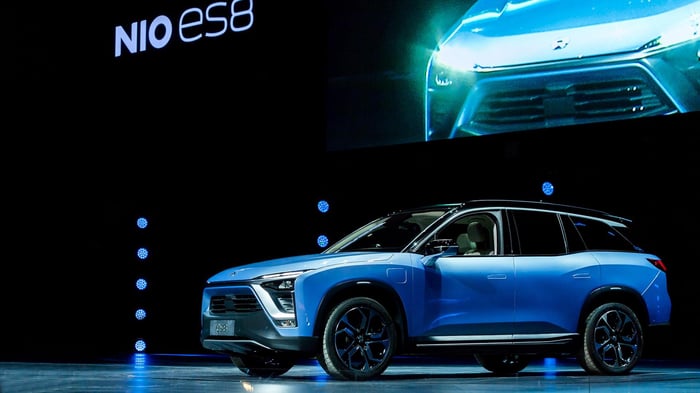 Who founded NIO and when?

NIO was founded in 2014 by William Bin Li, a serial entrepreneur who also founded automotive content provider Bitauto. Li owns a bit less than half of the company.

Who are its major investors?

There's really only one: Chinese internet giant Tencent Holdings ( TCEHY -4.94% ) was a key early investor in NIO. Tencent currently owns about 21.5% of the company through a series of subsidiaries.

NIO first came to the world's attention with the EP9, an electric supercar that it developed to launch its brand. The company's first mass-produced model is a high-performance seven-passenger electric SUV called the ES8. So far, it's only for sale in China, at a base price of 448,000 yuan (about $65,300).

The ES8 began shipping in June. As of the end of August, NIO had delivered 1,602 ES8s and taken reservations (with deposits) for nearly 16,000 more.

NIO's second vehicle will be a smaller (five-passenger) SUV called the ES6. The company expects to reveal it by the end of 2018, and to begin deliveries in the first half of 2019. 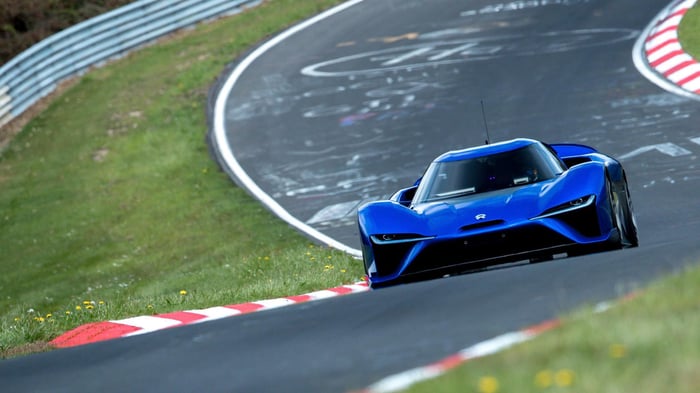 Where is NIO's factory?

NIO doesn't yet have its own factory. It plans to lease a factory that is currently under construction in Shanghai. It expects that factory to be ready by the end of 2020. In the meantime, the ES8 is being built under contract by Chinese automaker JAC Motors, in a facility that can build about 120,000 NIOs a year.

Does NIO have self-driving technology?

It's working on it. NIO's vehicles currently come with a proprietary Level 2 advanced driver-assist system, called NIO Pilot. The system is powered by processors supplied by Intel subsidiary Mobileye. NIO plans to add new functionality to the system over time, via over-the-air software updates.

NIO's vehicles also include what the company claims is "China's most advanced in-car AI connected assistant," called NOMI. Among other things, NOMI can open the car's windows, adjust the climate control, control the seat massage functions (yes, really!), and take photos with any of several digital cameras integrated into the car.

Those technologies, plus a unique customer app, a strong emphasis on user experience, and the high performance of its vehicles, are key to NIO's efforts to differentiate itself in the crowded field of electric-vehicle makers in China. 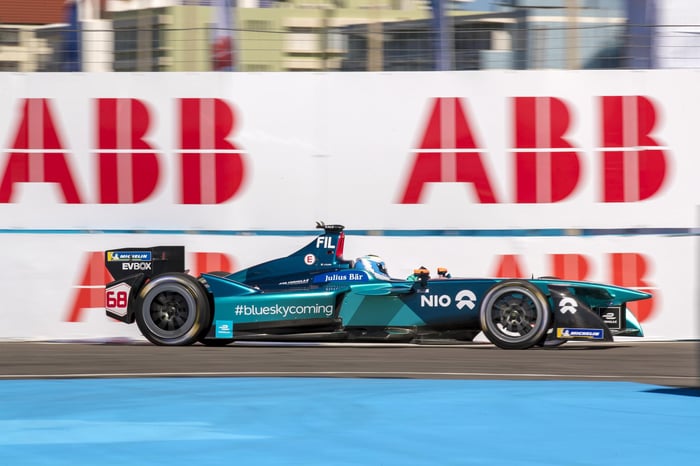 NIO has made performance part of its brand. It participates in the all-electric Formula E racing series. Image source: NIO, Inc.

Not yet, and it may not be profitable for a while. Although it has a vehicle in production, NIO is still an early stage company: It posted a loss of $502.5 million in the first half of 2018, on just $7 million in revenue, after losing $759 million in 2017. (Remember that it delivered just a handful of ES8s before the end of the second quarter.)

Will NIO need more cash in the future?

The business plan outlined in NIO's prospectus assumed (as most do) that the company would go public at the midpoint of its range, $7.25, which would have raised around $1.1 billion net of fees. To get by without additional investment, it'll have to tighten its belt in a couple of areas, likely research and development and marketing.

It should be OK for a while, though. Its plan is to spend about $600 million over the four quarters that began on July 1 -- slightly less than its cash on hand before the IPO.

The big question: Is NIO a buy?

It might be. On the one hand, there are a lot of start-up electric-vehicle companies in China -- over 300, by one estimate. On the other, China is likely to become a huge market for electric vehicles before long, NIO is better-capitalized than many of its domestic rivals, and the ES8 has features that help it stand out as a premium offering.

NIO itself sees Tesla, which has announced plans to build its own factory in Shanghai, as a key future rival. While it acknowledges that its advanced driver-assist technology currently lags Tesla's Autopilot, the ES8 appears to have a significant advantage on price versus Tesla's Model X, at least in China. (The Model X currently starts at 964,900 yuan, or about $140,700, for a base 75D version in China, more than double the price of the ES8.)

I think for U.S. investors looking to get access to the (likely) electric-vehicle boom in China, NIO might not be a bad bet. For starters, thanks to its decision to go public on the New York Stock Exchange, NIO is more transparent to U.S. investors than many other Chinese companies entering this space. It's well-capitalized, it has a partner that has proven it can build vehicles at scale, and it probably has enough money (or nearly so) to get to a sustainable level of sales.

Given where it is now, and the risks that lie ahead, NIO isn't super cheap at its current valuation. But it stands a good chance of getting its vehicles into production as planned. If it does, and if its upscale electric SUVs win a steady stream of happy buyers, NIO's current share price could look very cheap a few years from now.