Please ensure Javascript is enabled for purposes of website accessibility
Log In Help Join The Motley Fool
Free Article Join Over 1 Million Premium Members And Get More In-Depth Stock Guidance and Research
By Rich Duprey - Sep 25, 2018 at 9:31AM

Another part of the e-commerce giant's plan to take over your entire home.

With its control over your living room now firmly established, Amazon.com (AMZN -0.03%) now wants to extend its reach into your kitchen with a new line of Alexa-enabled home appliances, giving General Electric (GE 0.28%) and its investors more to worry about as it undergoes a major reorganization.

Amazon unveiled a new microwave oven that, although it doesn't come with Alexa, does work with nearby Echo devices so you can use voice commands to cook, reheat, and order popcorn. The new Amazon Basics Microwave has a built-in Dash replenishment button for popcorn so you can order more when you're running low.

The microwave is priced at just under $60. GE's smart microwave, which also works with Alexa, is priced at $140. It also comes with scan-to-cook technology that, as its name implies, allows users to scan a barcode on food packaging via a mobile app and the microwave will set the appropriate settings for cook time and power level. While arguably more advanced, the pricing difference will be difficult to overcome. 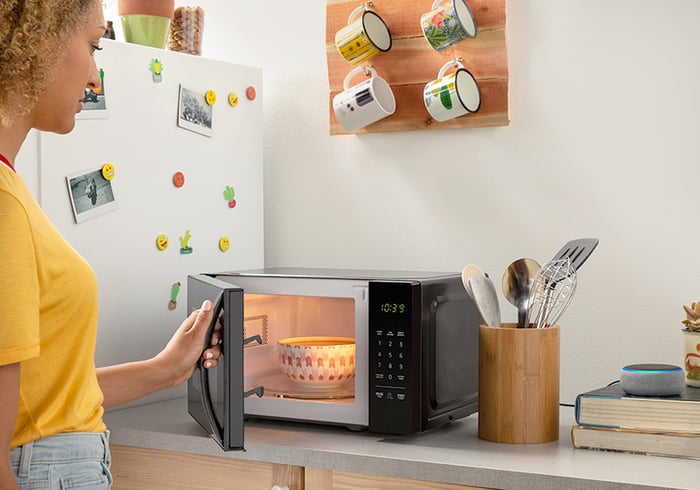 Connecting all the pieces

Amazon wants to take over your home. As Amazon founder and CEO Jeff Bezos has said, "We want customers to be able to use Alexa wherever they are." All aspects of your home and car are now in Amazon's field of vision. In addition to the microwave oven, Amazon also unveiled an updated Fire TV Recast for live-recording TV and broadcasting it to other devices; the Echo Sub for connecting with an existing home sound system; Echo Auto, a device for your car; and a new Ring security camera.

General Electric's stock has lost half its value over the past year as plans to break up the conglomerate congeal. It is spinning off its healthcare unit and selling its stake in Baker Hughes, while focusing instead on its power and aviation and renewable energy businesses. GE sold its appliance business to Chinese giant Haier in 2016 for $5.6 billion, but the GE nameplate remains on the products under a 40-year licensing agreement. At the time, the CEO of the appliance division said, "We'd like (customers) to be confident that we stand behind our products as we always have."

Home is where Alexa is

The connected home will be a key area for Amazon. In May, it announced the opening of Amazon Experience Centers in partnership with homebuilder Lennar that will feature two Echo speakers in select new homes to control the television, lights, thermostat, shades, and more. Recurring or on-demand home services can be booked through Amazon.

Although it has started with a microwave oven, it's not a stretch to see other connected appliances being developed over time. Refrigerators that feature Dash buttons to order a variety of products used regularly, as well as dishwashers that order detergent when you're running low could easily be in the future. It's not just GE (or Haier) that should worry about these developments, but Whirlpool, LG, and other appliance makers also ought be taking notice of Amazon.com's new presence in the kitchen.