But now, Salesforce wants to be just as aggressive with deploying top-notch mobile services as it was in building a business in the cloud before many other tech giants made the transition. Salesforce always wants to be where its customers are -- and in an increasingly mobile world, this means its products need to be fine-tuned for mobile experiences.

To this end, Salesforce announced an important partnership with Apple (NASDAQ:AAPL) on Monday that will help the company refine its mobile offering. 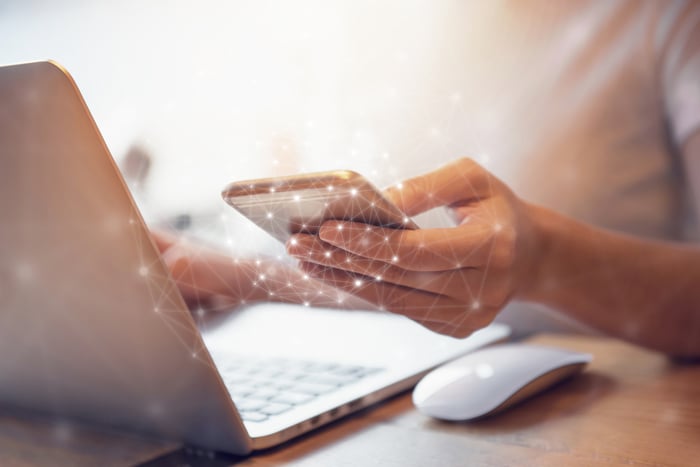 Cozying up with Apple

As part of its partnership with Apple, Salesforce will redesign its apps to take advantage iOS's Siri Shortcuts, Face ID, Business Chat, and more. This includes the first-ever Trailhead mobile app, which will launch on iOS before any other mobile platform, as well as other apps designed for specific industries and small businesses.

To accelerate its rapid adoption of mobile technology, Salesforce and Apple are also developing the first Salesforce mobile software developer's kit (SDK), optimized for Apple's iOS programming language: Swift. "The native SDK will enable businesses and developers to build and deploy apps for iPhone and iPad on the Salesforce Lightning Platform," Salesforce said in a press release on Monday.

Finally, Apple and Salesforce are helping developers learn the skills required to build Salesforce-based apps with Swift by launching a free course called Get Started with iOS App Development Trail. The course is already available and is designed for both developers and beginners.

Salesforce plans for its rebuilt Salesforce iOS app to be available in early 2019, with its first-ever Trailhead mobile app launching "later next year." The software-as-a-service company's SDK for iOS will be available by the end of this year.

Not the first, nor the last

Of course, Salesforce isn't new to mobile. Indeed, in the company's most recent annual report, the company said its services are designed from the ground up to be deployed across mobile devices and major internet browsers, making them "intuitive and easy to use."

Further, Salesforce gave investors a window into how it's prioritizing mobile when it acquired Quip -- a mobile-first collaborative productivity software tool -- two years ago.

But the rising importance of mobile makes staying at the edge of the latest mobile advancements key for Salesforce's ability to keep attracting and retaining customers. When it comes to Salesforce's efforts to build out its mobile capabilities, this is likely just the tip of the iceberg.