Here's a look at the retailer's double-digit revenue and earnings growth, soaring digital sales, and more.

Thanks to a controversial marketing campaign, Nike (NKE -0.70%) was already in the spotlight before its quarterly earnings release this week. But the sports footwear and apparel company stirred things up yet again this week when it reported double-digit revenue and earnings-per-share growth for its first quarter of fiscal 2019.

As investors consider the implications of Nike's most recent earnings report, here's an overview of some of its most important metrics from the quarterly update, including soaring digital sales, a buyback of millions of its own shares, and more. 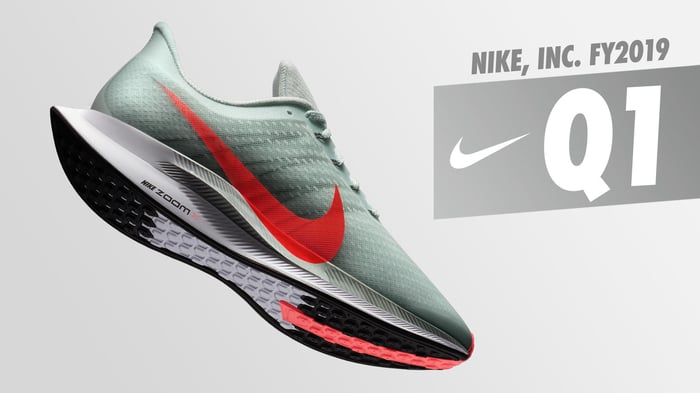 Nike CEO Mark Parker said the company saw "strong momentum and balanced growth across our entire business" during the quarter.

Nike's EPS climbed 18% year over year to $0.67. Not only did this beat a consensus analyst forecast for EPS of $0.63, but this growth rate also marked an acceleration compared to the 15% increase Nike EPS saw in its fourth quarter of fiscal 2018.

A 36% year-over-year increase in Nike's digital sales meant digital was the company's "fastest-growing channel in each and every geography," explained Nike CFO Andy Campion in the company's fiscal first-quarter earnings call.

The retailer's footwear sales saw double-digit growth on a consolidated basis, rising 10% year over year. This was a significant acceleration from 6% growth for footwear in the company's fiscal fourth quarter.

During the fiscal first quarter, Nike kept up the strong 11% year-over-year growth in apparel sales the retailer posted in its previous quarter. Continued strong momentum was "driven by fleece, tops and bottoms, jackets and pants," Parker said during the company's Q1 earnings call.

Nike spent $1.4 billion to repurchase 17.8 million of its shares. This spending on repurchases was significant, but down from the $1.6 billion Nike spent buying back shares in its fiscal fourth quarter. The lower spend is likely because Nike stock was trading higher during the quarter than it was the previous quarter; shares have surged 30% in the past six months and 57% in the past 12 months.

This leaves just $1.9 billion left in Nike's $12 billion four-year share repurchase authorization. But management already has a new four-year $15 billion share repurchase program in place that will initiate once the current program ends.

Nike mostly maintained its revenue outlook, which was revised higher in its previous quarter. The company's guidance calls for fiscal 2019 revenue to rise at a rate that is in the "high single digits" compared to revenue in fiscal 2018. Though management narrowed its guidance range to expect revenue growth "at the lower end of that range." In other words, management likely expects growth between about 7% and 8% instead of growth between approximately 7% and 9%.