Hot on the heels of its latest smart-device line, the e-commerce giant is investing in a homebuilder.

For the past three years, Amazon ( AMZN -1.38% ) has dedicated hundreds of millions of dollars to dozens of promising businesses through its Alexa Fund to further the reach of its intelligent voice assistant.

But while the Alexa Fund's early investments have been overwhelmingly allocated to voice-technology start-ups in the space, its latest move takes that dedication to an entirely different level. 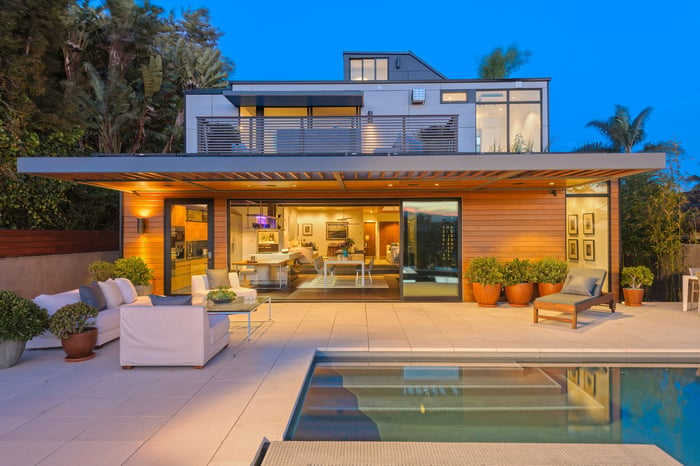 On Tuesday, home design and prefabrication company Plant Prefab revealed the Amazon Alexa Fund was one of two investors included in a $6.7 million Series A funding round.

You read that right: Amazon just made its first investment in a homebuilder.

Plant Prefab, for its part, bills itself as the "first home factory in the nation focused on sustainable construction, materials, processes and operations." It also claims that, compared with traditional builders, its approach reduces construction time by 50% and costs by 10% to 25% in major cities. What's more, in contrast to the lower-quality modular homes offered by many of its prefabrication peers, Plant Prefab focuses on high-quality custom homes often based on the plans of its clients' architects -- a model that bears striking similarities to Amazon's industry-disrupting ways.

But more pertinent to this investment: You don't need to stretch far to tie Plant Prefab to the goals of Amazon's Alexa.

Voice has emerged as a delightful technology in the home, and there are now more than 20,000 Alexa-compatible smart home devices from 3,500 different brands. Plant Prefab is a leader in home design and an emerging, innovative player in home manufacturing. We're thrilled to support them as they make sustainable, connected homes more accessible to customers and developers. [emphasis mine]

The future of smart homes

It seems, then, that a central premise of Amazon's involvement is that Plant Prefab will increasingly incorporate connected smart-home functionality into its designs. And in doing so, it will foster the widespread acceptance of lifestyles revolving around Alexa's voice technology and ecosystem.

Now, this doesn't guarantee that Amazon has broader ambitions to eventually become a wide-scale homebuilder itself. But it seems to be no coincidence that this news came shortly after Amazon quietly unveiled a dozen new Alexa-related products last week. Those products include a line of new Echo smart speakers, Fire TV devices, and even a voice-controlled microwave with a built-in Dash button to order popcorn when you're running low.

If the latter device seemed like a less-than-subtle hint that Amazon wants to take over more than just your living room, we can safely consider the Plant Prefab investment a blaring declaration to the same effect. And as voice technology continues to become more pervasive, I suspect Amazon is only just getting started.