Visit nearly any Starbucks (NASDAQ:SBUX) at almost any time of day, and you'll see proof that the company has succeeded in its goal of becoming a "third place" -- a social center beyond the home or the workplace. Its tables may be occupied by people working on novels, groups of friends chatting, businesspeople conducting meetings, and even couples on dates.

The coffee chain has made its cafes into the kinds of places where people can be comfortable hanging out for much longer than it takes to consume a cup of joe and a pastry. That helps it sell a lot of beverages, snacks, and meals.

It's a model that even other coffeehouses and cafes have not been as successful with, but it's an enticing business strategy -- one that more companies are seeking to emulate. Among them are a pair of new players that you might not expect to find in this space -- Capital One (NYSE:COF) and AT&T (NYSE:T). 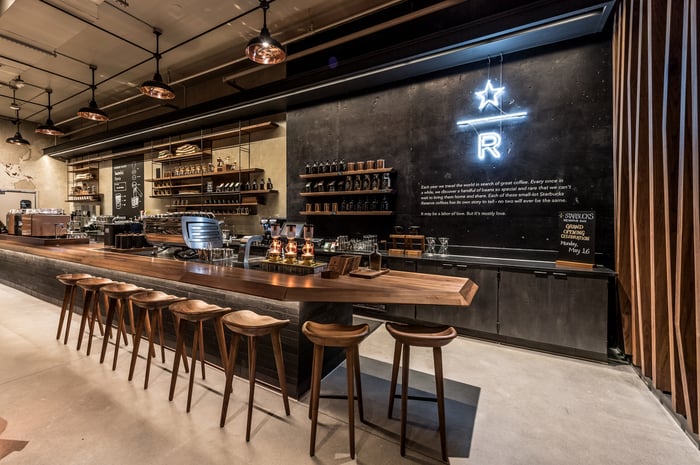 Starbucks has made its cafes into comfortable places to hang out, and people do -- for hours. Image source: Starbucks.

At core, Starbucks' model doesn't depart much from the cafe culture that predated it. Coffeehouses were always places to hang out, though at various times, they perhaps served more narrow demographics. Starbucks' variation on the theme has been to make itself a bit more inviting to a broader set of customers, with offerings even for those  people who don't enjoy coffee. And of course, vitally, it has completely dispensed with the idea that people should leave when they've finished.

Enter Capital One's Cafes: Peet's coffee shops that are housed inside working banks, offer comfortable seating, cheap (sometimes free) drinks for cardholders, meeting spaces for local nonprofits, and of course, good WiFi. You won't have to be doing any banking to visit the cafes, nor will you have to have an Capital One account of any type. The bank/credit card company will offer some financial literacy programming in the cafes, but it will also host free food events, music performances, and holiday giveaways.

AT&T has only just begun testing its third place concept, "The Lounge." The pilot version in Seattle is a 3,000-square-foot space that houses a retail store, a coffee shop, and a "hangout space." In its press release, AT&T also described it as "a second living room," and noted that it will offer free, super-fast internet access.

A bank and a phone company?

Part of the reason Starbucks works so well as a third space is that its loyal patrons tend to consume its products on a daily -- or sometimes more-than-daily -- basis. People may stop in for a coffee in the morning or a snack in the afternoon, and hanging out for longer periods becomes a natural outgrowth of that behavior.

Adding cafes to banks or cellphone stores makes less sense. There's little need to visit either of those types of establishments on a daily basis, so the cafes themselves would have to become an independent draw.

And that will be the challenge, of course: Both the Capital One Cafes and AT&T's Lounge will be competing head to head against Starbucks' well-established presence. And in the case of The Lounge, AT&T chose to put its test coffee shop in Starbucks' home market.

It's easy to see what each of these companies is trying to do. If they can  turn their locations into hangouts for their existing customers, they can boost brand loyalty, perhaps attract some new customers, and win more business as a byproduct.

That seems like a difficult strategy. Certainly, their current customers may enjoy the convenience of having coffee, tea, and snacks conveniently located when they need banking help, or when they already making a trip to upgrade their smartphones. They may even hang out after such a visit instead of going to Starbucks or one of its competitors. But it's hard to imagine many folks becoming regulars at The Lounge or a Capital One Cafe unless the food and beverage offerings become the main attraction.

While siting cafes within banks may make some sense -- they certainly need less of their physical footprints now that so much of our banking is conducted online -- a coffee shop is not a logical combination with a phone store. And none of these three companies makes its profits via people hanging out. Creating a "third place" atmosphere is just a tool that allows them to sell more -- and at this point, coffee joints and cool hangout spots are simply too ubiquitous in most areas for this type of corporate-sponsored, second-tier cafe to be any sort of a lure.