CarMax (KMX 1.14%) investors have been patiently waiting for concrete evidence that the retailer's sales growth trends would rebound as selling conditions improved in the industry. Executives have explained away recent declines as just temporary speedbumps, after all, driven by pricing conditions at new car dealerships.

On Wednesday, the used-car giant backed up that optimistic prediction with quarterly numbers that showed solid sales gains while earnings jumped thanks to lower taxes.

Sales trends improved for the second straight quarter thanks to the combination of a rising store base and higher sales at existing locations. CarMax's operating profitability slipped due to heavier spending in areas like advertising and new store launches. Yet a lower tax rate ensured that earnings expanded at a healthy clip anyway. 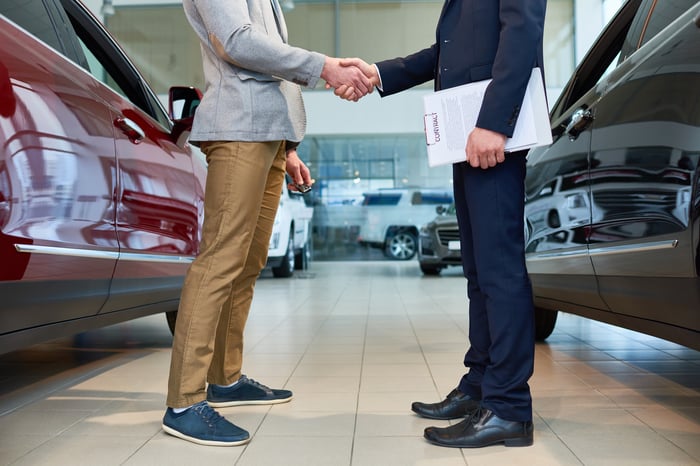 Executives credited strong execution for helping deliver its return to comparable-store sales growth. "The performance primarily reflected improved conversion," they explained in a press release, referring to the rate at which browsers turn into buyers, "which we believe benefited from the solid performance of our store teams and contributions from our digital initiatives."

These gains were just partly offset by another decline in customer traffic, management said.

CEO Bill Nash and his team still expect to open 15 stores during this fiscal year, with just over half of those locations coming in relatively small markets. The next two quarters will be especially busy on this score as four lots launch in the third quarter and five are on track for a fourth-quarter opening.

Meanwhile, investors are hoping that CarMax's positive volume trends extend deeper into the new fiscal year, which seems likely given the robust conversion and pricing gains the company just posted. Management would no doubt like to see their customer traffic levels stabilize after shrinking for several consecutive quarters. However, CarMax has demonstrated that it can sell more cars through its physical and online sales channels even during a period of sluggish shopper visits. That's good news for the business and for its shareholders.

These 3 Stocks Could Triple Your Money Over the Next Decade

CarMax Stock Is Still Racing Ahead