Honeywell International (NASDAQ:HON) has been one of the best performing diversified conglomerates in the last year, and one of the few that's outperformed the S&P 500 on a year-to-date basis at the time of writing. That's impressive, and bodes well for the company's future after its upcoming spinoffs of automotive turbo business Garrett (NYSE: GTX) and home products and ADI global distribution business Resideo (NYSE: REZI). Let's take a look at why Honeywell has had such a strong run and what it means for investors. 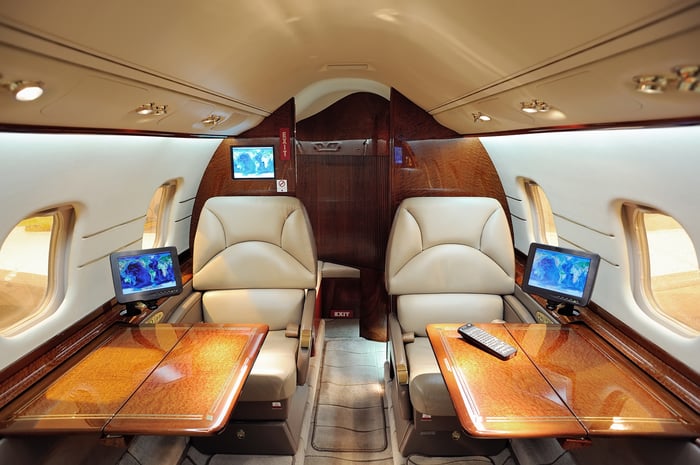 Honeywell is benefiting from a recovery in the business jet market. Image source: Getty Images

In a nutshell, Honeywell raised full-year EPS guidance in the first two quarters of 2018. The company started the year forecasting $7.75-$8, but has since raised guidance to $8.05-$8.15. The question is now what's responsible for the increase, and is it sustainable?

A big part of answering this question can be seen in the table below. As you can see in the data, Honeywell has raised its full-year 2018 organic sales growth guidance largely as a consequence of better-than-expected sales performance from its aerospace and safety and productivity solutions (SPS) segments.

Moreover, a breakout of the increase in guidance by segment demonstrates the relative importance of the changes at each segment. While the increase from aerospace was unexpected -- the segment is Honeywell's largest, and contributed more than 36% of sales in 2017 -- the significant increase at SPS (just 14% of 2017 sales) stands out. 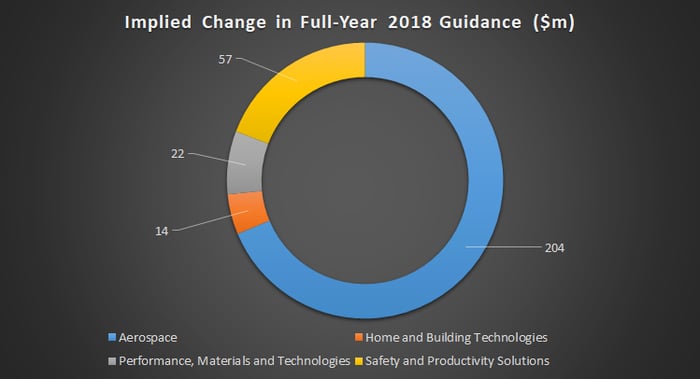 There a couple of reasons why these trends are a positive for investors.

The first point is self-evident, but the second deserves further consideration. Starting with aerospace, it's been a good year for aerospace suppliers, with peers like United Technologies and General Electric Company also reporting strong aftermarket sales growth. Strength in aerospace aftermarket sales is the reason behind United Technologies' 2018 guidance increase, along with the 20% jump in the daily rate of GE Aviation aircraft spares sales in the first half of 2018.

Meanwhile, the chart below shows the improvement in Honeywell's aerospace sales growth in 2018. It's been driven by ongoing growth in commercial aviation and a nascent recovery in business and general aviation, a market that VP of Investor Relations Mark Macaluso described as being better than expected in 2018 during a presentation at a Gabelli aerospace and defense conference. 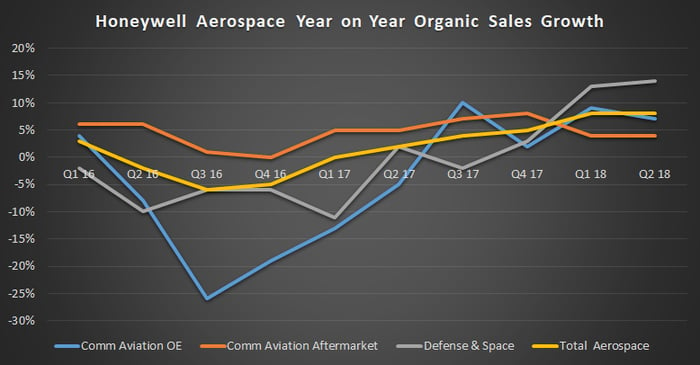 The really exciting part of Honeywell's productivity business is Honeywell Intelligrated, a company that helps businesses with e-fulfillment at their distribution centers. Order growth at Intelligrated was a whopping 40% in the second-quarter as customers such as Amazon.com ramped up capital spending on e-fulfillment. On the second-quarter earnings call CEO Darius Adamczyk described how Intelligrated provided "material handling of equipment design, installation, and support for Amazon's new more than 500,000 square foot distribution center north of Calgary."

Answering a question from Goldman Sachs analyst Joe Ritchie on the earnings call, Adamczyk described Amazon as being "a great customer. We've had a long-term partnership," and went on to argue that Intelligrated's solutions was hitting "the part of warehouse automation that's growing the fastest."

All told, the positive trends in Honeywell's standout segments look set to continue in the future, and given the exposure to some relatively secular growth drivers -- e-fulfillment and connectivity solutions in aircraft -- there's more to Honeywell's growth than a cyclical upswing in its end markets.