The industrial conglomerate is in need of a radical overhaul, and management may well deliver.

The investment case for buying stock in United Technologies (RTX 0.24%) is based on two ideas. The first is that the stock's valuation discount to its peers doesn't reflect that the company is going through a period of suppressed earnings due to actions taken to transition toward better long-term growth. The second is that a potential breakup of the company -- something management is openly discussing and hedge fund managers want -- would release value in the stock. Looking into the recent second-quarter results, I think that engineering a breakup has become even more important. Here's why and what investors should make of it. 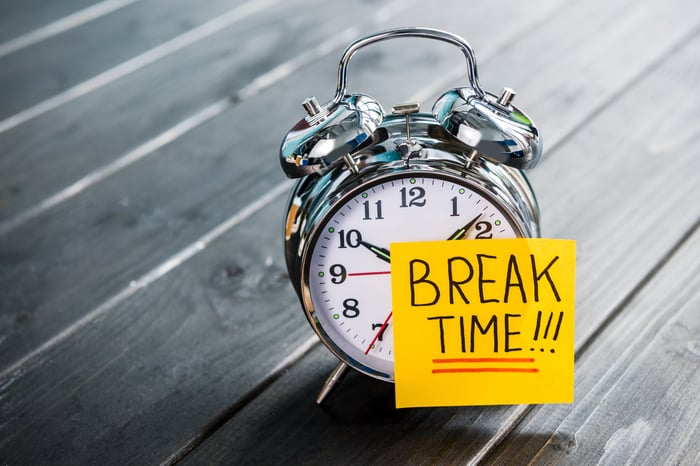 The key takeaway from the earnings

Management cheered up investors by raising the company's full-year sales and earnings growth guidance. Full-year 2018 organic sales are now expected to increase by 5% to 6%, and full-year adjusted EPS is now expected to be in the range of $7.10 to $7.25 compared to previous guidance of $6.95 to $7.15.

It looks good on a headline basis, but here's the key point. Strength in the commercial aerospace aftermarket is largely offset by disappointing earnings from Otis and UTC Climate, Controls & Security (CCS). In a nutshell, the company's aerospace segments (UTC Aerospace Systems, or UTAS, and Pratt & Whitney) are outperforming Otis and CCS, and this strengthens the case for a breakup.

Here's a summary of how earnings guidance has changed through the fiscal year.

Underlying earnings not as strong as guidance implies

The midpoint of UTX's segment profit guidance has actually come down to an increase of $350 million compared to a previously estimated increase of $425 million. So how, exactly, was management able to hike EPS guidance when segment profit guidance was reduced? Discussing the outlook changes on the earnings call, CFO Akhil Johri argued that "strength at Aerospace Systems offset the reduced outlook at Otis versus our prior expectations," but as you can see above, the $25 million increase in UTAS segment profit didn't fully offset the $50 million reduction in the outlook at Otis.

Don't worry too much about the reduction in the CCS outlook -- it's largely down to a reduction in earnings from the sale of the profitable ice cream dispenser business Taylor to Middleby.

In reality, the key to the EPS guidance increase comes from a lower-than-previously expected full-year adjusted tax-rate -- Johri now expects 24.5% compared to prior guidance for 25.5%. That's worth around $80 million and more than offsets the $75 million reduction in segment guidance.

Why the breakup case just got stronger

The difference in segment performance highlights the benefit of splitting the company up. United Technologies operates out of four segments, and if you think about them as separate companies, it's clear that they would offer dramatically different investment propositions.

Otis elevators could be looked at as a turnaround story, with management aggressively trying to increase equipment unit sales in China in order to develop long-term service revenues. However, the problem is that input costs are rising, and United Technologies is working through a backlog of orders taken at extremely competitive pricing -- Otis operating profit actually fell 7% to $488 million in the second quarter.

The CCS segment is positioned in an attractive industry with long-term growth prospects. However, it has not been performing as well as it might. As noted above, the Taylor disposal has impacted expectations for profit growth in 2018, but a quick look at the segment's organic sales and orders growth compared to Ingersoll-Rand shows a consistent level of underperformance. While the performance of United Technologies commercial businesses (Otis and CCS) is somewhat disappointing, the aerospace businesses are doing well. Pratt & Whitney appears to have put its geared turbofan (GTF) aircraft engine technical issues behind it, and CEO Greg Hayes confirmed GTF engine production was on track for 2018.

Meanwhile, UTAS reported yet another strong quarter of growth in commercial aftermarket, and with the forthcoming addition of Rockwell Collins (COL), UTAS is well positioned to benefit from a buoyant commercial aerospace market. Hayes has promised investors an update on the board's considerations with regard to breaking up the company into three parts -- aerospace (Pratt & Whitney, UTAS, and Rockwell Collins), Otis, and CCS -- and the recent results highlight the potential for a breakup to generate value for investors.

The divergent performance of the four segments suggests that they could be better run as separate businesses. This means that if Hayes does conclude the strategic review by resolving to split up the company then the stock is likely to appreciate. This is a large part of the reason why some hedge fund managers are holding the stock, and individual investors can do the same.