Please ensure Javascript is enabled for purposes of website accessibility
Free Article Join Over 1 Million Premium Members And Get More In-Depth Stock Guidance and Research
By Matthew DiLallo - Sep 26, 2018 at 9:17AM

While the oil-producing group resisted the president’s calls to push down prices, some of his other actions might just do the trick.

The price of oil is up more than 60% since OPEC stepped in to stabilize the market in late 2016 by coordinating with Russia and other non-members to reduce supply. That rally has taken the price of a gallon of gasoline up with it, driving the national average from $2.10 to $2.85 over that timeframe, which is starting to cause some pain at the pump. President Trump has therefore openly criticized OPEC and called on it to work on getting prices lower. The oil-producing group, however, has resisted those calls, recently saying that there's no need to raise production since the market has plenty of oil to meet demand.

While Trump hasn't been able to get oil prices down by threatening OPEC, he might still get his wish through some of his other actions. That's the view of oil giant BP ( BP -0.55% ), which believes that a combination of Trump's sanctions on Iran as well as his trade war with China could cause enough demand destruction to drive down the price of oil. 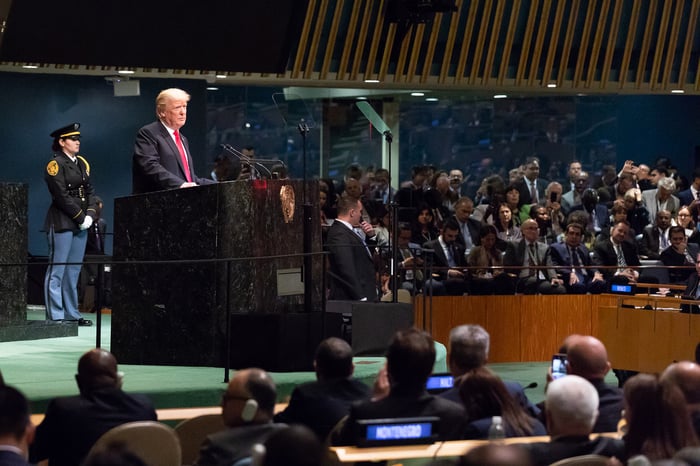 Crude recently rallied to its highest level in four years at more than $82 a barrel after OPEC rebuffed Trump by backing its current production plan. The concern many market watchers have is that oil could continue to climb as Trump's sanctions on Iranian crude take effect this November. Analysts at J.P. Morgan warned that "a spike to $90 a barrel is likely" in the coming months since as many as 1.5 million barrels per day of Iranian could come off the market, which is roughly 1.5% of global supplies. Meanwhile, some of the world's largest commodity traders think crude could pass $100 a barrel early next year.

While BP doesn't disagree with the view that crude could top $100 a barrel in the short term, it warned that the price might not last long. "The market is very fixated on the loss of barrels on the supply side," according to comments made by Janet Kong, the head of BP's trading business in Asia, in a recent article by Bloomberg. However, Kong continued by pointing out that, "the market has overlooked the results of the U.S.-China trade war, how that might impact the global economy, China's growth, and the regional economy in Asia."

The tensions from that trade war have already started cooling off global economic growth according to the International Monetary Fund. That could cause oil demand to decline by 150,000 to 200,000 barrels per day compared to the current outlook, which might result in a "demand shock" in Kong's view, and drive oil prices lower. 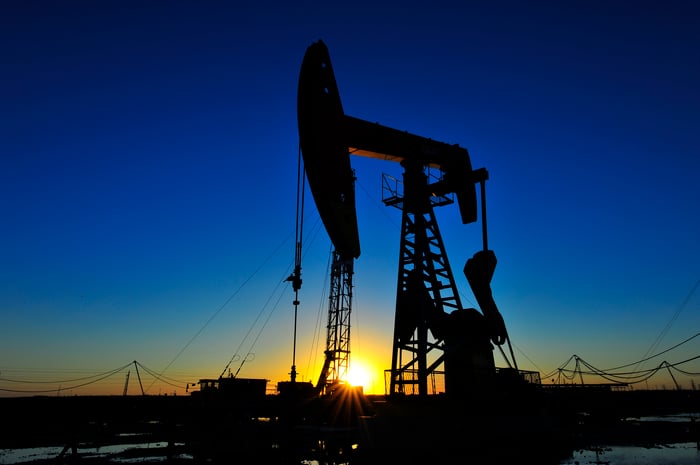 While Trump's trade war could eventually push oil prices down from their current height, that won't matter to most oil companies since the bulk of them have spent the past several years resetting their cost structures so that they can run on lower oil prices. BP is one of those companies. Currently, the oil giant estimates that it can generate enough cash flow at $55 oil to invest the capital needed to grow its production 5% per year through 2021 and fund its dividend, with plenty left over. At the company's current trajectory, it's on pace to produce $14 billion to $15 billion in free cash by 2021 assuming oil averages just $55 a barrel.

Occidental Petroleum ( OXY -1.65% ), meanwhile, recently achieved the goal of its oil breakeven plan. Because of that, it can now generate enough cash flow at $40 oil to fund its dividend and the capital needed to maintain its current production rate. That positions it to grow its production 5% to 8% per year on the cash flows it can produce at $50 a barrel. Meanwhile, with crude now well above that level, Occidental Petroleum has had the flexibility to increase capital spending so that it can grow faster as well as buy back stock, with it authorizing a $2 billion program. If crude keeps rising, Occidental could further accelerate as well as buy back more stock. Likewise, it can cut back if needed should crude prices tumble.

EOG Resources ( EOG -0.66% ) also has lots of flexibility to make changes depending on the level of oil. At $50 a barrel, the company can generate enough cash to pay its dividend and fund the wells needed to boost its U.S. oil production by 15%. Meanwhile, at $60 a barrel, it could grow its production at an even faster 25% annual rate. However, the company plans to be flexible, which is why it currently intends on using some of its excess cash to pay down debt instead of growing as fast as it can.

A growing number of oil stocks are in this same boat in that they can continue growing even if crude were to plunge back to $50 a barrel. AS a result, they should be just fine if oil prices give back some of their gains due to Trump's trade war.

It's growing increasingly likely that crude oil could soon top $100 a barrel because of Trump's sanctions on Iran. While that would be great news for oil stocks since they'd produce an even larger gusher of cash flow, crude's stay in the triple digits might not last long due to the negative impact those prices might have on demand, especially when factoring in the downside of Trump's trade war. Oil prices and oil stocks could therefore be very volatile over the next year. That's why investors should stick to oil companies that can run on $50 oil, since they'll thrive in either environment.