The stock market spent most of Wednesday in positive territory but then succumbed to a late-day drop that sent major benchmarks lower. Investors digested the latest interest rate increase from the Federal Reserve's Open Market Committee. A quarter-percentage-point increase was largely expected, but some market participants nevertheless seemed to worry about what rising rates could do to economic growth over the long haul. Despite the turbulence toward the end of the session, there were still some big winners among individual stock names, however, and GoPro (NASDAQ:GPRO), Papa John's International (NASDAQ:PZZA), and Canada Goose Holdings (NYSE:GOOS) were among the best performers on the day. Here's why they did so well.

Shares of GoPro finished higher by 4.5% after the maker of action camera equipment got favorable remarks from a well-known Wall Street analyst company. Oppenheimer upgraded shares of GoPro from market perform to outperform, pointing to the likelihood that launches of new products for the holiday season have the potential to reinvigorate the beaten-down company. In particular, new opportunities like live streaming could pull in new customers and broaden GoPro's exposure across the industry. Now that GoPro seems to be more focused on the areas in which it's likely to have the most success, professional investors think that the extent to which the stock has pulled back is now overblown. 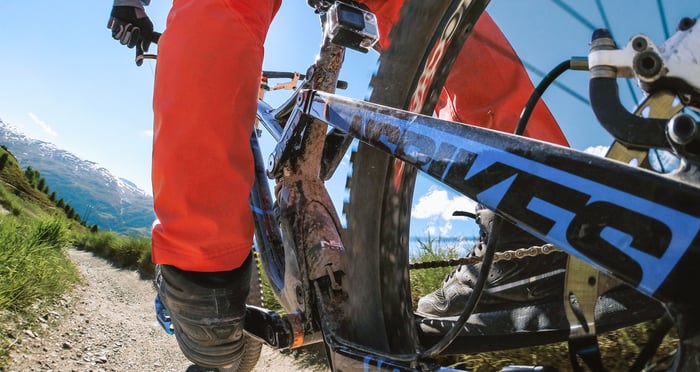 Papa John's International stock climbed 8.5% in the wake of new reports suggesting that the pizza specialist is considering strategic alternatives more closely. The company has apparently asked any parties interested in purchasing the pizza restaurant chain to prepare bids for Papa John's board to consider, and speculation includes the possibility that founder and major shareholder John Schnatter could team up with private equity investors to buy the entire company. Given that Schnatter left his role as CEO in July amid pressure over insensitive comments, it makes sense that he might want to retake control of Papa John's, but worries about its ability to stand up to competition still remain.

Finally, shares of Canada Goose Holdings rose 10%. The maker of high-end outerwear got favorable remarks from analysts at DA Davidson, who started their coverage of Canada Goose with a buy rating and a price target of $68. Even though Canada Goose has seen impressive share-price gains recently, some investors still don't give the company full credit for the opportunities it has to grow. Between stronger pricing power, international growth potential, and the possibility of bringing more production in-house, Canada Goose has several levers that could result in bigger gains over the long run.