Amazon.com (NASDAQ:AMZN), already the world's second-most-valuable company with a market capitalization of $1 trillion (give or take), got a bit more good news on Thursday. It took a stock price of more than $2,000 a share to get Amazon to its trillion-dollar valuation, you see. But according to one analyst, Amazon is set to reach another milestone in very short order: $2,525 a share. 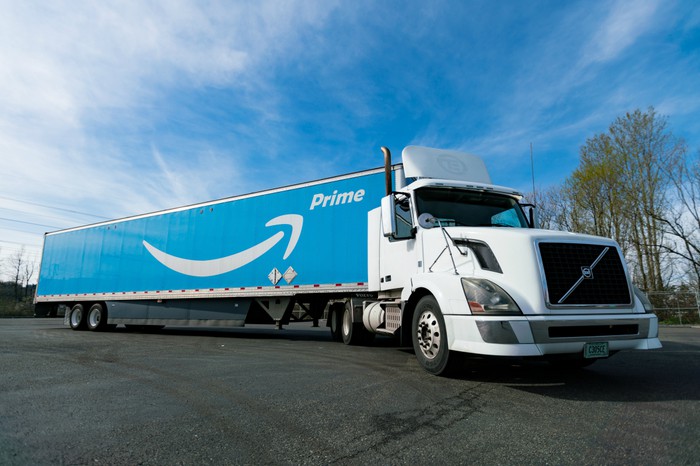 Ordinarily in this column, I focus on new analyst upgrades (or downgrades). Today's analyst move isn't either of those. Instead, it's a change in price target -- albeit a huge one.

This morning, the ace Amazon analysts at Stifel (who've already racked up 2,308 percentage points of market outperformance on Amazon stock) announced a new industry-high price target. With Amazon just a few dollars shy of Stifel's last $2,020-per-share price target, Stifel has hiked its target to $2,525, implying more than a 25% profit for investors who buy Amazon today.

(Needless to say, Amazon stock is up on the news.)

Why is Stifel so optimistic about Amazon stock? While you might suspect this analyst was just going for the shock value of positing an industry-high price, Stifel actually has some pretty robust numbers to back up its projection.

"We are increasing our near- and long-term revenue estimates for Amazon's retail, advertising, and AWS businesses," says Stifel in a note covered today on StreetInsider.com (subscription required), and "modestly raising our margin forecasts, and taking our price target to $2,525," to boot.

Stating the blindingly obvious, Stifel argues that "Amazon is the leader in two large and rapidly growing markets (eCommerce and Cloud), and strong momentum from AWS and advertising are elevating the near/intermediate-term margin trajectory." What's less obvious, however, is how much more growth Stifel sees in Amazon's future -- growth numbers that would make even companies working off a much smaller revenue base drool with envy, and numbers that seem simply fantastic for a company doing $208 billion in annual business.

Which numbers, precisely? We turn to TheFly.com for the details:

In 2017, Amazon.com generated nearly $17.5 billion in revenue from its Amazon Web Services (AWS) cloud computing business, and generated a staggering 24.8% operating profit margin on this business. AWS has already produced $11.5 billion in sales from this unit in the first six months of this year (growth of 48% year over year, according to data from S&P Global Market Intelligence), and appears on track for perhaps $23 billion for the full year. By 2019, however, Stifel sees AWS reaching $36.6 billion (as much as 59% growth) followed by $50.1 billion in 2020 -- 37% more growth.

So how should investors react to this news? Let's examine the valuation.

At $963.2 billion in market capitalization (Amazon's selling slightly below the trillion-dollar mark today) and $6.3 billion in trailing earnings, Amazon stock currently costs a pricey 153.5 times earnings. Free cash flow at the company is great at $8.8 billion -- but still only good enough to bring Amazon's stock valuation down to 109 times FCF.

Is 30% or better sales growth in Amazon's highest-margin businesses going to generate profits growth sufficient to justify Amazon's high price? Perhaps, if it results in much faster earnings growth than revenue growth for the company.

In this regard, it's worth noting that Stifel isn't Amazon's only fan. With 43 buy ratings on Wall Street and only two holds (and no sells), there's really no one who expects this company to fail. The opposite is more accurate -- most analysts believe Amazon will grow its earnings at better than 57% annually over the next five years.

As for me, I admit that I have reservations about paying a triple-digit P/E for a double-digit growth rate, but clearly, Stifel does not. Given its record on Amazon in the past, could Stifel have a better grasp of the future for Amazon stock than I do?

Maybe -- and with a potential 25% in profits on the table, it might even be worth gambling that Stifel does.