Here's what you need to know about DHX Media's big day.

Data source: DHX Media. Unless noted otherwise, all amounts are in Canadian dollars.

Foremost in the report, DHX Media's long-running strategic review did not end with anything as cataclysmic as a buyout. Instead, the company is making a number of significant tweaks to the current business model.

First, the dividend policy has been put on ice for the time being. That frees up roughly 10 million Canadian dollars ($7.7 million) of annual cash flows to be reinvested in DHX Media's fast-growing WildBrain segment, allowing the company to put its weight behind that promising digital-media platform.

Related to that move, DHX Media is seeking partnership deals to provide exclusive children's content for broadcasters and digital streaming services. That effort will build on WildBrain's large network of youth-oriented YouTube channels.

Elsewhere, the company kicked off a five-year agency partnership with Hong Kong-based apparel giant Global Brands Group, which will expand the Peanuts brand's presence across Asia -- minus Japan, where a recent 10-year agreement with Sony (NYSE:SONY) takes priority.

As for the fourth-quarter results, the final revenue tally came in below the $99 million preliminary reading DHX Media provided two weeks ago. Other metrics, such as the bottom-line earnings and the adjusted EBITDA profits, were in line with the early report. That being said, the bar wasn't exactly set sky-high. DHX Media's stock took a 41% single-day haircut when the preliminary report was published.

We have realigned our strategy to capitalize on key macro trends in the industry. These trends include the rising demand from the global streaming market for premium original programming, and the increasing popularity of kids' content on YouTube, which is driving rapid growth in our WildBrain platform. We believe this significant refocusing of our strategy and efforts will allow us to deliver growth, while generating free cash flow to pay down debt. -- CEO Michael Donovan 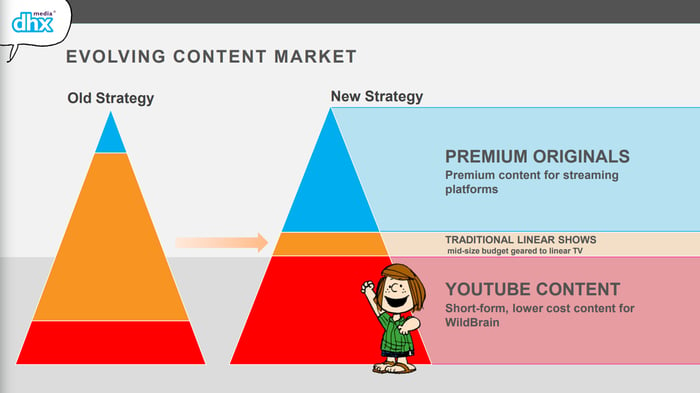 These are the priorities for the 2019 fiscal year, which already is underway:

Leaning into both WildBrain's short-form video format and a desire to find more high-end content deals, traditional mid-budget content for regular TV network distribution is getting lost in the mix. The idea is to run ahead of the macro trends, which already point in the same direction, preparing the company to stay relevant for the next era of children's entertainment. Whether low-budget YouTube content or glossy, high-end exclusives win out, DHX Media wants to have a fair shot at the resulting market.

Along the way, DHX Media should be able to cross-pollinate these two fertile business areas. Moving WildBrain stories and characters up to the premium cable and streaming worlds might be difficult, but the company plans to launch some YouTube series featuring its premium-grade "franchise brands."