One of the more highly anticipated initial public offerings (IPO) of the year hit the market yesterday, with the public debut of SurveyMonkey parent SVMK (NASDAQ:MNTV). The software-as-a-service (SaaS) company launched to much fanfare, soaring 44% on its first day of trading on the Nasdaq exchange.

So why is there so much excitement around a survey-software maker that's been around since the dot-com era? From its humble beginnings, SurveyMonkey has become the world leader in digital surveys and could potentially have much more growth ahead. 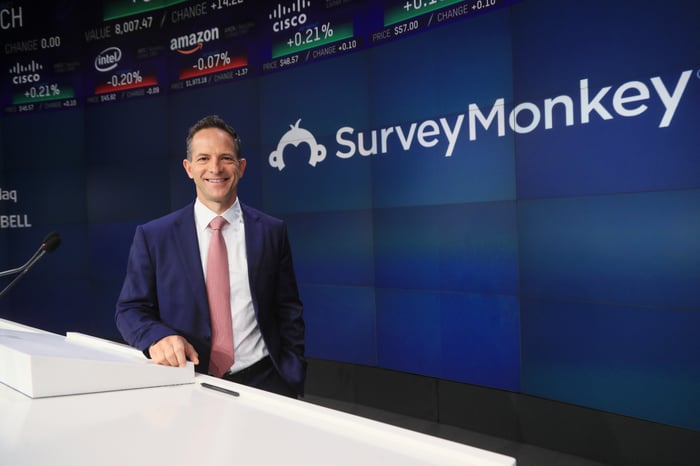 SurveyMonkey has been around since 1999, and the company says it has "changed the way people gather feedback by making it easy for anyone to create their own online surveys." The company offers digital surveys and data analytics to both personal and enterprise users, which can be used for gauging customer satisfaction, measuring customer engagement, or conducting market research.

The company provides a free version of its software that offers limited functionality. This free service allows users to experience the usefulness and utility of the platform, and acts as a funnel to encourage users to upgrade to its full version. SurveyMonkey says its growth has been largely driven by organic adoption and viral growth -- primarily the result of free users converting to paid customers. About 80% of paying customers come via the company's website or organic online search.

The paid version has multiple tiers that offer a wide range of functionality. Customers can choose either monthly or annual subscriptions for the Standard plan, but the higher tiers -- the Advantage and Premier plans -- require an annual subscription.

SurveyMonkey boasts about 600,000 paying customers, across more than 300,000 organizational domains, including 98% of Fortune 500 companies. Since the company was founded, it has attracted more than 60 million users to its platform. SurveyMonkey currently counts 16 million active users in 190 countries worldwide, and believes it's "the most widely used survey product globally."

The online survey specialist generated revenue of $218.7 million in 2017, an increase of 5% year over year. The company produced a net loss of $24 million last year, down from a $76 million loss in 2016. For the first six months of 2018, revenue of $121 million jumped 14% compared to the prior-year period, and its net loss of $27 million increased compared to a $19 million loss during the same period in 2017. SurveyMonkey makes 90% of its revenue from subscriptions, and the company had a 19% free cash flow margin last year.

A number of high-profile names have investments in SurveyMonkey. Tennis great Serena Williams, who joined the company's board of directors last year, joins well-known hedge fund Tiger Global Management, which has a 29% stake, and Facebook Chief Operating Officer Sheryl Sandberg -- who also sits on the board -- with a 9.9% position. Sandberg is the widow of Dave Goldberg, who headed SurveyMonkey prior to his death in 2015.

Customer relationship management specialist salesforce.com (NYSE:CRM) also committed to invest $40 million in SurveyMonkey via its venture-capital arm Salesforce Ventures. The cloud provider has a clear track record of investing in smaller tech companies that plug into its SaaS strategy, including Twilio, Dropbox, and DocuSign. Earlier this year, the company acquired MuleSoft, a tech platform that helps companies bring together data from disparate sources for analysis.

SurveyMonkey CEO Zander Lurie said in an interview that the company has never needed to raise cash, and that the IPO was about raising the company's profile to increase its visibility for potential enterprise users. When questioned about the company's lack of profitability in a CNBC interview, Lurie pointed to SurveyMonkey's generous cash generation and the "vote of confidence from Salesforce."

With 20 million questions answered on its platform every day, and between 2.5 million and 3 million people sending in surveys daily, it appears that SurveyMonkey could just be getting started.