If you cook, you probably know McCormick (NYSE:MKC) well. The company produces spices and flavorings that are in millions of consumers' pantries, and it also provides the ingredients that commercial producers of snack foods use in order to give their products their distinctive flavors.

Coming into Thursday's fiscal third-quarter financial report, McCormick investors were hoping that its solid pace of growth would remain firmly in place. McCormick's results were indeed good, but some investors weren't entirely pleased with some of the challenges that the spice maker faces and the impact that they could have in the future. 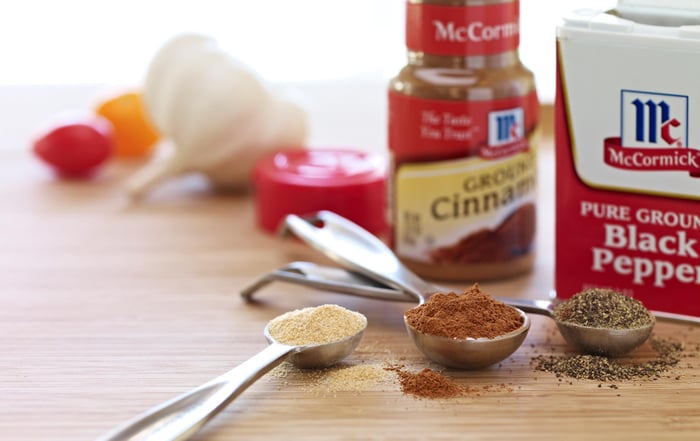 McCormick's fiscal third-quarter results were in line with the growth that the company has experienced recently. Revenue was higher by 14% to $1.35 billion, which was only slightly below the 15% pace of growth that most of those following the stock were looking to see. Net income soared 60% on a GAAP basis, and even after accounting for some one-time positive impacts, adjusted earnings of $1.28 per share topped the consensus forecast among investors by $0.01.

Looking more closely at its financials, McCormick attributed much of its success to recent strategic moves. In particular, the addition of product lines like French's mustard and Frank's hot sauce played key roles both in the consumer division and for its flavor solutions business, accounting for 10 percentage points of the company's total sales growth.

Yet the sources of McCormick's sales gains varied by segment. For the consumer division, the Asia-Pacific region has been an important contributor to growth. For flavor solutions, however, Europe, the Middle East, and Africa have been essential drivers in pushing sales higher. The core Americas market has been instrumental to growth across the company.

From a more fundamental perspective, McCormick's efforts to maximize corporate efficiency were effective. Gross margin jumped by more than three percentage points from year-ago levels, as the company emphasized the cost-control programs it's put in place, along with efforts to emphasize value-added products over commodity spice goods. McCormick did spend more on marketing expenses, and raw materials costs also remained a potential threat to margins. Yet tax reform once again paid dividends, with tax expense falling by $8 million despite pre-tax income jumping by $57 million from year-earlier levels.

CEO Lawrence Kurzius celebrated the news. "McCormick is a global leader in flavor," Kurzius said, "with a broad and advantaged global portfolio which continues to grow and position us to fully meet the demand for flavor around the world." The CEO also pointed to strong strategic execution in improving sales, earnings, and margin figures.

What's next for McCormick?

McCormick sees even more success ahead. In Kurzius' words, "We are focused on growth, delivering against our objectives, strengthening our organization, and building the McCormick of the future."

But not all of the things that McCormick had to say about its expectations for the rest of the fiscal year matched up with that rosy outlook. The spice company cut its projections for future sales growth, reducing its estimates by a percentage point to set a new range of 12% to 14% growth for the full fiscal year. Still, McCormick justified that move by pointing to the currency markets, where recent moves in foreign exchange rates haven't produced as big of a tailwind for McCormick's international business as it had initially thought. Some of the revenue gains should come from modest price increases designed to offset higher ingredient costs that the company has faced lately as well.

Still, bottom-line guidance was strong. McCormick now expects that it will earn between $4.95 and $5 per share in adjusted earnings, up from its previous range of $4.85 to $4.95 per share. A one-time positive impact of more than $2 per share from tax reform will add to McCormick's performance, and the company believes that cash flow will be strong enough to help it return capital to shareholders as well as paying down debt.

McCormick investors weren't entirely happy with the sales guidance reduction, and the stock was down 2% at midday on Thursday following the announcement. Some shareholders seem concerned about the company's long-term prospects. But if McCormick can keep executing well on its fundamental business opportunities, then the future could look even spicier for long-term investors.