Changing consumption habits, a shift to online ordering, and competition from small upstart brands on grocery store shelves have stymied the performance of many consumer packaged goods (CPG) companies in recent quarters. Yet spice and condiment multinational McCormick & Company (NYSE:MKC) has bucked this trend -- shares are up 21% over the last twelve months, including a 15% year-to-date gain.

McCormick's success can, of course, be traced to its August 2017 purchase of Reckitt Benckiser's (OTC:RBGL.Y) RB Foods division, through which McCormick picked up the French's Mustard brand, Frank's RedHot hot sauce, and Cattlemen's barbecue sauce. The portfolio additions contributed 13 percentage points of revenue growth to McCormick's top line in its fiscal second quarter of 2018. They're also contributing to McCormick's wide margin expansion: In the second quarter, the organization's operating margin improved nearly 400 basis points when adjusted for transaction expenses and one-time charges, to 15.7%.

Investors' enthusiasm is also reflected in a growing acceptance of McCormick's original acquisition rationale -- namely, that Reckitt Benckiser, which is headquartered in the U.K. and focuses primarily on home and healthcare goods, had not realized the potential of its U.S. packaged food brands. This quarter, McCormick reported that French's mustard and Frank's RedHot are beginning to gain valuable shelf space and deeper distribution in both the grocery and dining channels.

Two quotes from CEO Lawrence Kurzius, which I've drawn from McCormick's second-quarter earnings conference call, explain in a nutshell why there's much potential ahead in the RB Foods acquisition.

In the first comment, Kurzius praised Reckitt Benckiser for its many strengths, but also noted that RB Foods never really fit within the company's core categories:

They regarded this as an off-strategy business, and so it didn't get the resources that the other brands in that company got. And their category management capabilities were frankly pretty rudimentary. Today's category management exercises require specialized tools, it requires a lot of data and it requires talent, all of which are expensive and require substantial scale to work. And so, their competitor was able to push them around at the shelf pretty handily for the last three years before we bought the business. And we have been able to successfully now push back against that.

The unnamed competitor, is, of course, Kraft Heinz Co. (NASDAQ:KHC), which owns the Heinz Mustard label, Kraft barbecue sauces, and the Tapatio brand, an institutional food-service hot sauce. McCormick realized before purchasing RB Foods that its deep marketing skills and distribution prowess, combined with sophisticated data analysis tools (all of which it successfully employs in its core condiments business), would translate well in the task of reasserting French's dominance in domestic grocery aisles. 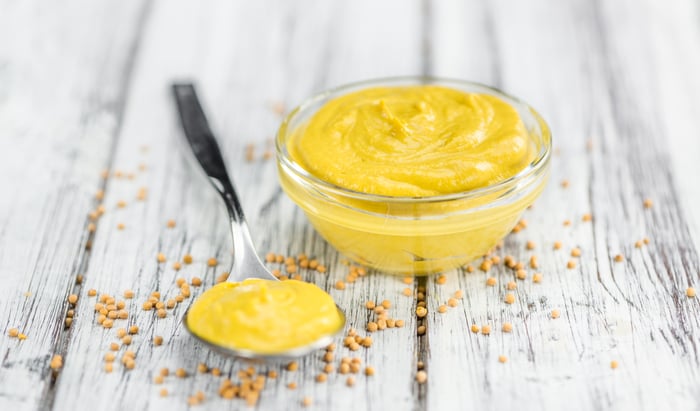 Indeed, Heinz's mustard has taken market share from French's in recent years as Reckitt Benckiser underinvested in the brand. Kurzius outlined the pitch McCormick is now making to grocery partners:

As an example, in many customers, French's mustard has the same shelf presence as, let's say, the other brand that's out there, but at three to four times the velocity. I mean, the competing brand doesn't deserve equal presence. Customers have been very responsive to the fact that French's is undershelved and under-SKU'd [having too few product variants under unique stock-keeping units, or SKUs] and that the competitor's brands are overshelved, over-SKU'd, and may not even deserve to be there in the first place. And so that's a selling story ... a customer-by-customer selling story, but they have been very receptive to it. The data totally supports it, and we have been pretty credible.

This was the crux of the argument McCormick made to investors when it announced the RB Foods acquisition, and it appears to be gradually playing out in practice as the company revamps the portfolio. McCormick's data reveals that it's selling French's at a much higher rate than Heinz mustard. The company is willing to push back on Heinz's shelf space by having the conversation above with retailers throughout its distribution system -- a process that will take several quarters, if not a few years, to complete.

As I recently explained, wresting real estate from Kraft Heinz across mustard, hot sauce, and barbecue sauce also serves McCormick's goal of expanding product variants among the power brands it bought from Reckitt Benckiser. Potentially, a wide avenue to revenue growth exists in simply introducing new flavors and package sizes, in a portfolio which had seen little innovation from its transatlantic owner.

Consolidation in the CPG industry has continued at a rapid pace in 2018, and the largest conglomerates may see benefits in the coming years through the serial bolt-on acquisitions of small, innovative companies. But investors will realize the greatest stock appreciation in situations like McCormick & Company's RB Foods purchase, where an experienced acquirer adds value to a neglected asset which is sitting on untapped brand potential.