If you've kept up with merger headlines this week, you're aware that The Hershey Company's (NYSE:HSY) announced acquisition of Amplify Snack Brands Inc. (NYSE:BETR) for $1.6 billion is thematically linked to Campbell Soup Company's (NYSE:CPB) $4.9 billion purchase of snack maker Snyder's-Lance Inc. (NASDAQ:LNCE). Both are attempts by stalling consumer packaged goods (CPG) companies to beef up participation in the rapidly expanding salty-snacks category.

The deals provide CPG giants access to the extremely nimble brands held within these companies. Snyder's-Lance owns Snyder's of Hanover pretzels, as well as Kettle Brand potato chips, both of which hold No. 1 market positions within their categories.

CPG conglomerates have been racing to modernize their brand portfolios in an attempt to get in sync with consumers, especially millennials, who are opting for healthy, fresh choices in the grocery aisle. But the corporate directive to figure out what appeals to contemporary shoppers hasn't translated into innovation which meets market demand.

Conversely, the most successful of start-ups like SkinnyPop find themselves expanding exponentially, due to viral word of mouth enabled by social media. This has certainly been the case for Halo Top Creamery, which introduced a high-protein, low-sugar, low-calorie ice cream in 2012. In less than five years, Halo Top has become the No. 1 selling brand of ice cream in the United States, displacing longtime leaders Ben & Jerry's and Haagen-Dazs. 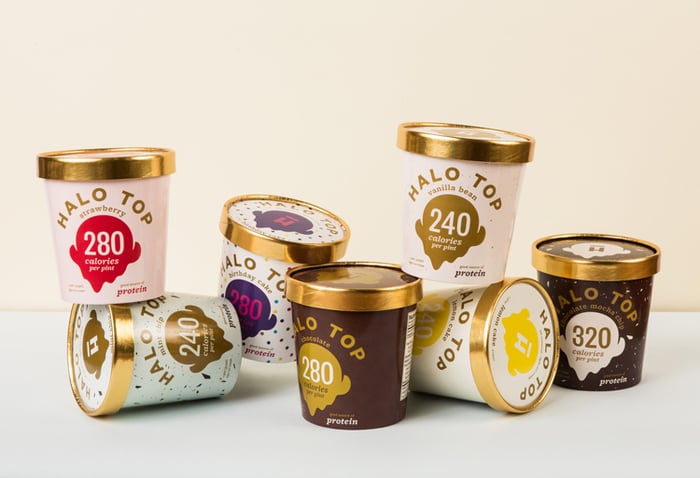 What do SkinnyPop and Halo Top have in common, besides uncannily similar sounding names? Both were started by entrepreneurs who were unsatisfied with standard formulations of popular snack foods (popcorn and ice cream). Both are grounded in a BFY philosophy, and you won't find any artificial ingredients on their product package labels. Finally, both have soared to billion dollar plus valuations -- Reuters reported this summer that Halo Top is exploring sale options which would value it at north of $2 billion.

As CPGs are finding it difficult to innovate such products from scratch, they've taken to reformulating existing brand lines simply to keep up. Recently, I discussed PepsiCo's initiative to try to sell a natural, organic version of Doritos and reformulations of other previously unhealthy snacks to companies like Amazon.com's Whole Foods Market. But primarily, in 2017, companies like Campbell's and Hershey's resorted to buying innovation through mergers and acquisitions.

Of course, there's another more persuasive reason for management teams to consider purchasing the upstarts in this industry. Below are a few comments made by Unilever's (NYSE:UL) CEO, Graeme Pitkethly, during the company's earnings conference call in late October:

But we also lost share in ice cream in North America to Halo Top, a new competitor. ... [T]he battle with Halo Top in North America, I mean that proposition has built a 5% share position very, very quickly. It's taking 1.5 share points from us, we have responded very quickly with Breyers. ... So across the totality of our North American portfolio, we are very competitive in every category apart from ice creams, and in ice cream the loss was due to the new entrant of Halo Top.

For a dominant multinational like Unilever, which owns Ben & Jerry's, it must be disconcerting when a brand unconnected with established competitors rises to take 5% of a market within an eye-blink. This upending of the normal order of thing means that we'll continue to see intense interest in the smallest of CPG companies by their heftier peers. If a disruptor can take your market share at will, better consider acquiring it. Now, I'm not suggesting that acquisition-minded Unilever will end up buying Halo Top. Nonetheless, an announcement to this effect in 2018 wouldn't come as a complete shock within the continuing wave of small brand acquisitions.