There's no doubt that artificial intelligence (AI) and robotics will have a significant impact on the job market and make many of the tasks that humans currently perform obsolete. Right now, AI is already being used to teach cars how to drive themselves, which will eventually take away trucking jobs, and robots equipped with basic AI are increasingly being used in warehouses to sort, pick, and stock items.

Job-killing AI might seem like science fiction, but Carl Frey and Michael Osborne, two researchers at Oxford University, believe that 47% of all U.S. workers have a "high probability" of losing their jobs to AI over the next two decades. And they're not the only ones throwing around figures like this.

Kai-Fu Lee, the former president of Google China, a subsidiary of Alphabet (NASDAQ:GOOG) (NASDAQ:GOOGL), recently said in an interview:

I'm afraid that about 50% of jobs in the world are in danger. Whether these jobs will disappear in 15 years or 20 or 30, that's debatable. But it's inevitable. Not only can AI do a better job, it can do the job for almost marginal cost.

These predictions are dire indeed, but there are other voices in this discussion that say AI will bring a lot of benefits for future workers as well. Here are just a few: 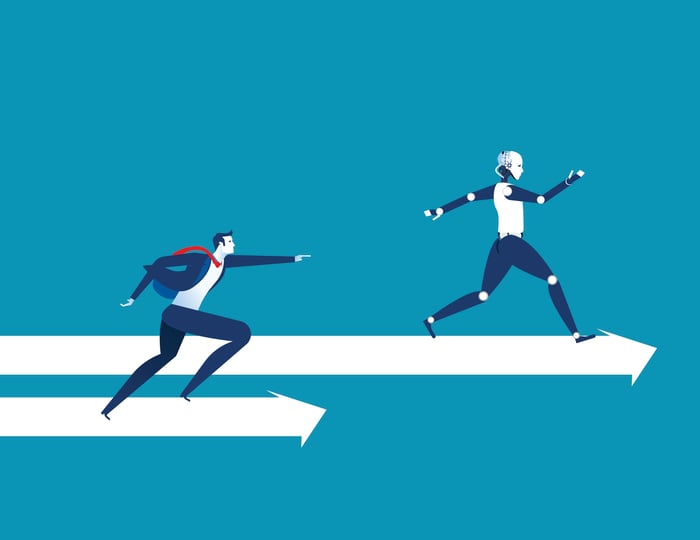 In the U.K., more than 800,000 lower-skilled jobs have been lost to technology over the past 15 years, according to a 2017 report by Deloitte. But during that same time frame, technology has also created 3.5 million new, higher-skilled jobs. And those positions pay about £10,000 ($13,170) more per year than the ones they replaced.

"Crucially, every nation and region of the U.K. has benefited, and we estimate that this technology-driven change has added £140 billion [$184 billion] to the U.K.'s economy in new wages," the report said.

Of course, the fact that new jobs were created in the past because of technology doesn't prove that the proliferation of AI will have a similar effect. But it's certainly an example of how technology doesn't necessarily have to take away all jobs -- and that some people are actually better off because of it.

For example, warehouses filled with robots that stock shelves and pack items will need to be managed by people with the skills to oversee those bots while they work. Similarly, other workers will need training to learn how to fix the bots when they break, write AI software to control them, and analyze the data they collect. All these jobs would likely pay more than the warehouse jobs robots are replacing.

2. AI can help people do their jobs better

AI will take away some jobs, but will help people with others. For example, AI algorithms have already been used by some doctors to help reveal breast cancer in patients. A study by Harvard pathologists showed that AI increased their diagnoses' accuracy from 96% to 99.5%.

AI could also help scientists discover new drugs much faster than they currently do. GlaxoSmithKline says that AI might help reduce the time it takes to target important molecules to fight diseases from over five years down to just one year.

Additionally, Microsoft (NASDAQ:MSFT) has partnered with St. Jude Children's Research Hospital to allow doctors to use the company's AI-based genomics service to help discover cures for diseases. Microsoft's AI looks at large amounts of genomic data that would be too much for humans to sift through, allowing doctors and researchers to process much more data than ever before.

And it's not just healthcare jobs that will benefit. Facebook's (NASDAQ: FB) former head of AI, Yann LeCun, said on a Reddit "Ask Me Anything" question and answer session last year that: "In general, AI will not replace jobs, but it will transform them. Ultimately, every job is going to be made more efficient by AI."

In fact, it's estimated that artificial intelligence will help augment many professions and will create $2.9 trillion in business value, while recovering 6.2 billion hours of worker productivity, by 2021, according to research from Gartner.

There's a lot of debate on this topic, but evidence indicates that AI could create more jobs than it takes away. Gartner research vice president Svetlana Sicular said last year, "Many significant innovations in the past have been associated with a transition period of temporary job loss, followed by recovery, then business transformation, and AI will likely follow this route."

Manufacturing jobs will suffer the most, according to Gartner's research. About 1.8 million jobs will be lost by 2020, but 2.3 million jobs will be created at the same time. Which means that in just two years, AI could start creating more jobs than it's killing off. And by 2025, AI is expecting to create 2 million net new jobs.

There are still a lot of unknowns when it comes to how AI will disrupt certain jobs. But investors should know that there's virtually no stopping this technology from expanding into nearly every industry. Consider that one in five workers who perform non-routine tasks will use some form of artificial intelligence in their jobs by 2022.

This means that investors need to keep tabs on companies that are at the cutting edge of this technology. One of the leading AI companies is Alphabet. It has already created its own artificial intelligence chips to make its AI services better, and has developed class-leading AI for its driverless vehicles through its Waymo self-driving vehicle company. And its AI-based Google Assistant is now used across the gamut of the company's smartphones and smart-home devices.

Alphabet benefits from AI by improving its services (which encourages people to keep using them) and then collecting more information on its users in order to sell ads.

There's evidence that users are open to AI collecting more data from them as well. A study conducted by Salesforce found that 59% of customers are open to companies using AI to improve their customer service experiences, and 79% of customers are willing to share their data if it improves contextualized interactions and creates a truly differentiated customer experience with a company. All of this is great news for Google's massive digital ad business, which is expected to reach $39.92 billion in the U.S. this year.

Investors looking to benefit from the rise of AI would be wise to consider Alphabet's lead in this space. Artificial intelligence is expected to grow into a $169 billion market by 2025, up from just $4 billion in 2016, according to Allied Market Research. Yes, AI will be disruptive, but it's becoming clear that this might not be bad for workers. And it might be very good for tech leaders like Alphabet.