Please ensure Javascript is enabled for purposes of website accessibility
Log In Help Join The Motley Fool
Free Article Join Over 1 Million Premium Members And Get More In-Depth Stock Guidance and Research
By Leo Sun - Sep 30, 2018 at 9:13AM

The tech giant remains committed to getting a billion users onto VR devices.

Facebook (META 7.19%) recently held its fifth Oculus Connect conference in San Jose, California, to reveal its future plans for Oculus VR. Let's take a closer look at three of the biggest announcements, and what they could mean for the future of the fledgling VR market.

Facebook announced that it will launch a new stand-alone VR headset, the Oculus Quest, for $399 next Spring. The Quest will be Oculus' first wireless headset to support positional tracking with both the headset and its dual controllers. Facebook says that there will be 50 titles available for the Quest at the time of its launch. One of the launch titles will be Vader Immortal, a three-part Star Wars VR experience. 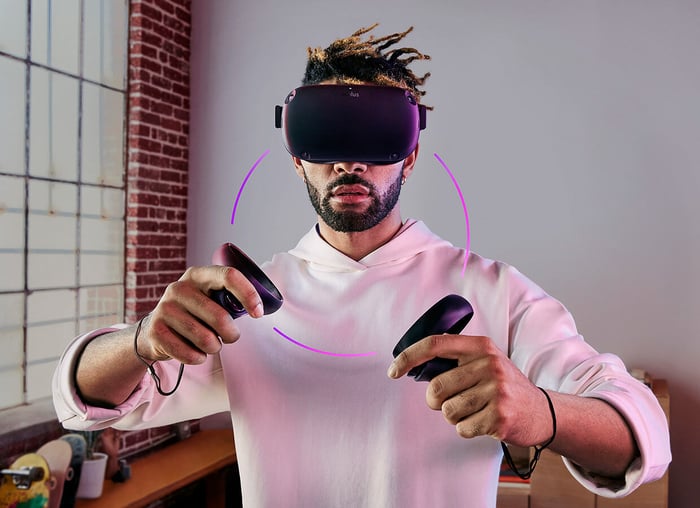 The Oculus Quest is Facebook's second stand-alone VR headset after the Oculus Go, which was released earlier this year for $199. The Go is powered by an older mobile chipset, and lacks the Quest's position tracking features.

Unlike the Go, which targeted the lower-end market, the Quest could cannibalize sales of the high-end Oculus Rift, which also costs $399 but needs to be tethered to a high-end gaming PC. However, Facebook may see that as a necessary move, since casual users would be more likely to buy stand-alone VR headsets than tethered ones like the Rift. Facebook also noted that content developed for current-gen Rifts will also be compatible with newer devices.

Facebook also announced several upgrades to the Oculus platform. First, it will introduce expressive avatars, which mirror a user's facial expressions and movements in virtual reality, later this year. That upgrade could pave the way for the introduction of richer social and gaming experiences on the platform.

Facebook is also bringing NBA games to Oculus Venue, the platform that lets users attend movies, concerts, and other live events with their digital avatars. Users who attend an NBA game will be given NBA jerseys for their avatars.

Facebook plans to add support for YouTube VR on the Oculus Go. That announcement was surprising, since Facebook is challenging Google in the VR and streaming video markets with Oculus Home, which competes against Google Daydream; and Facebook Watch, which competes against YouTube. However, Facebook and Google probably both think that it's more important to build a presence with mainstream users before competing against each other and fragmenting the market. 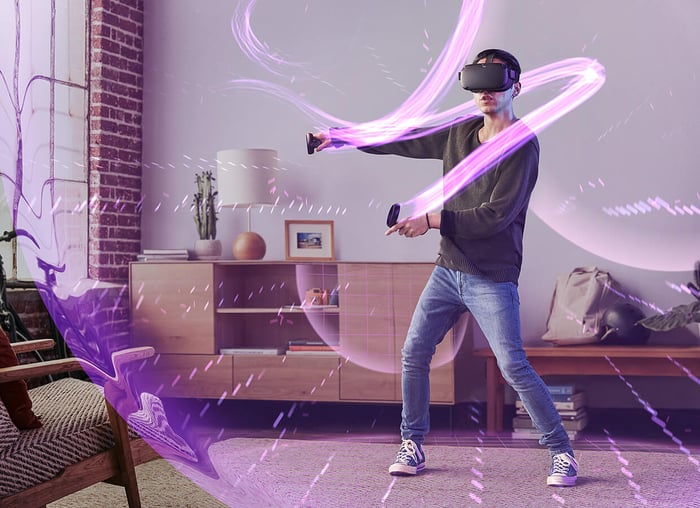 Facebook is also adding Rift support to the Oculus mobile app, which will allow users to remotely install software onto their headsets from their smartphones. That feature could reduce the "friction" of downloading VR experiences, which are generally much larger downloads than mobile apps. Looking further ahead, Facebook plans to eventually add the ability to cast Oculus content onto other mobile devices and TVs to extend its reach beyond headsets.

Zuckerberg, who previously estimated that it would take 10 million users to establish a new computing platform, reiterated his long-term goal of getting a billion users onto VR devices. TrendForce expects Facebook to only ship 900,000 headsets this year -- that represents decent growth from 700,000 units in 2017, but still indicates that VR is a tiny niche market.

If Facebook sells 900,000 headsets this year at $200-$400 apiece, it could generate $180 million to $360 million in revenue -- which would still equal less than 1% of its projected revenues this year. Facebook is also likely selling those headsets at paper-thin margins (or even at a loss) to reach more users.

Zuckerberg noted that for the VR market, "the journey is one percent finished, and in this case not even quite," but said that he remained "confident" that the market would eventually reach one billion users.

Player One isn't quite ready yet

Facebook clearly remains dedicated to Oculus, the company it bought for $2 billion ($3 billion if we include employee retention packages and goal targets) in 2014. However, weak sales of headsets this year don't bode well for the industry's future, and it remains unclear if mainstream consumers will ever see VR as an essential technology. Only time will tell if Facebook's big bets on the VR market will pay off.