The marijuana industry is just in its infancy, with many states still not allowing any legal sales of cannabis products and others limiting their use to only medical purposes. Yet many of the jurisdictions that have opened up their market to legal cannabis have seen huge amounts of interest, and the imminent opening of the Canadian market has investors excited that companies like Aurora Cannabis (NASDAQ:ACB) and Canopy Growth (NASDAQ:CGC) will be able to boost their sales dramatically.

Even as many U.S. investors look northward for the next major catalyst for further cannabis growth, the experience of jurisdictions that have already legalized the use of marijuana is an important indicator of whether trends toward greater acceptance are likely to continue. In particular, news from Nevada, which legalized pot for recreational use last year, shows just how lucrative the industry can be in generating tax revenue for state governments. Moreover, with the Silver State having just begun to tap into the cannabis market's full potential, many see explosive growth in the state's marijuana market in the near future. 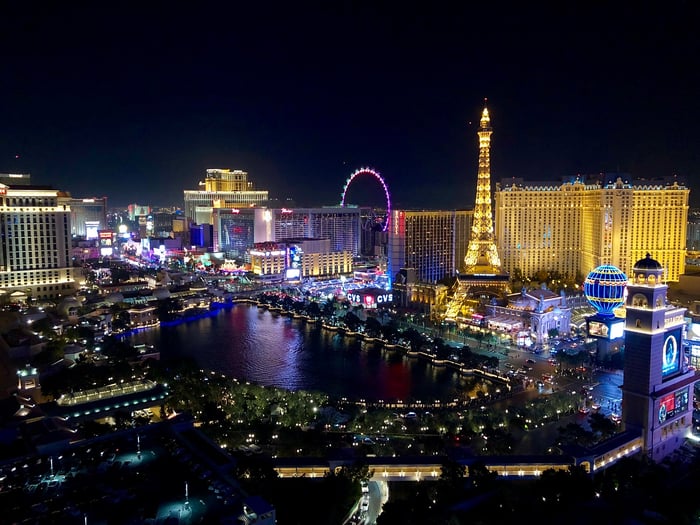 $70 million in pot taxes for Nevada

In late August, the Nevada Department of Taxation released marijuana tax revenue figures for the year that ended on June 30, marking the first full year after marijuana was legalized for adult use in the state. The results were unexpectedly strong, with the agency pulling in $69.8 million from marijuana tax collections. That figure was roughly 40% higher than the expectations that the state had when it first moved to legalize adult-use marijuana.

Growth in the marijuana industry in Nevada gained momentum throughout the period, with the most recent months featuring the largest tax revenue. In June alone, taxes brought in $7.12 million, with the tax on marijuana retailers producing more than $4 million in tax revenue and the tax on wholesale growers adding the remaining $3 million. For the full year, retail taxes were responsible for about 60% of Nevada's total take.

Recreational marijuana is the real deal

Nevada's experience shows the massive impact that legalizing marijuana for recreational purposes can have. For the year, the Department of Taxation said that total taxable sales of adult-use recreational marijuana came to nearly $425 million. By comparison, medical marijuana and sales of marijuana-related tangible goods came in at just $105 million.

Moreover, Nevada's dedicated appropriations of marijuana tax revenue show the appeal that recreational marijuana could have to other states considering legalization. The 15% tax on wholesale marijuana goes toward funding regulatory costs, local governments, and an account to be distributed to schools. The school account received $27.5 million in marijuana taxes for the fiscal year. Meanwhile, the 10% retail marijuana tax added $42.5 million to the state's rainy-day fund to shore up its overall balance sheet.

The key to an even bigger boom in Nevada

Yet some lawmakers in Nevada see a lot more potential for marijuana within the state. As one supporter of the legalization measure noted, what could really boost pot sales is if laws allow greater use of marijuana in public places. For instance, some believe that specific lounges for marijuana use would be instrumental in driving more visitors and tourists to take advantage of favorable pot laws. Given the volume of tourism in Las Vegas and other key locations across the state, giving visitors every opportunity to generate marijuana tax revenue could result in explosive growth for the industry.

Other jurisdictions have already allowed the creation of public-use businesses, known as pot lounges or weed cafes. In California, customers can buy marijuana at a retailer with a lounge and smoke it on the premises without ever leaving the store. Earlier this year, the city of Denver offered a license to a coffee establishment that will allow customers to eat edible cannabis products or use marijuana-containing vaping products on the premises.

Taxation of cannabis is controversial, though, because of competing interests of the state. On one hand, tax revenue can fund valuable government programs. But tax rates that are too high encourage black-market sales to evade the tax. State governments have to find the right balance while keeping broader public-policy considerations in mind.

Nevertheless, Nevada's positive experience with marijuana taxes is likely to spur further looks at legalization measures across the nation. That's good news for an industry that wants to do everything it can to build a favorable reputation even among those who don't intend to use marijuana themselves.