SeaWorld Entertainment (NYSE:SEAS) is finally treating park guests to its record-breaking river rapids ride. Infinity Falls unofficially opened at SeaWorld Orlando over the weekend in "soft opening" mode, in which it opens sporadically through the operating day. A media event to officially christen the ride with full-day operations will take place on Thursday.

Infinity Falls' debut comes unfashionably late. It opens days after the official end of summer and weeks after the end of the peak summer travel season. It's a rare miscue for SeaWorld in a year that finds the theme park operator's stock soaring 132% year to date. Infinity Falls was supposed to open this summer, giving guests at its most-visited park a thrilling way to cool off during the hottest and busiest months of the year. It didn't pan out, but the early rider reviews are encouraging. A silver lining here is that the back-in-favor amusement park operator now doesn't have to invest in a new thrill ride to attract guests next summer like it's doing at many of its other parks. For a change, everything seems to be working just right for SeaWorld Entertainment and its shareholders. 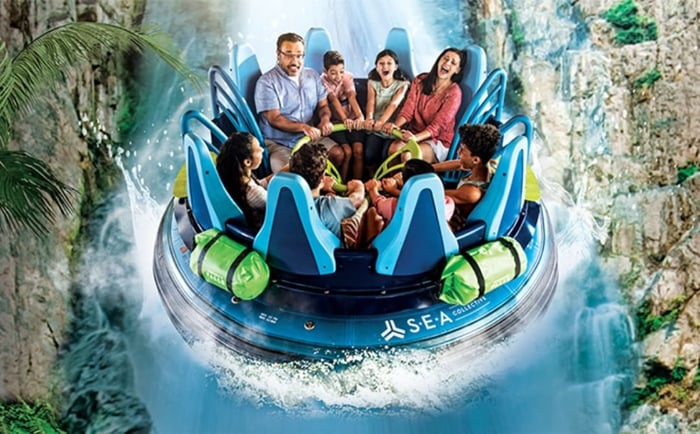 Splashing back into your portfolio

SeaWorld stock is near the four-year highs it set two weeks ago. The shares are finally trading above the 2013 IPO price of $27. The reputational damage caused by the Blackfish documentary that skewered the company's three namesake attractions isn't entirely gone. Activists in general and picketers in particular are still a presence. However, a spike in attendance this year suggests that the public in general has moved on to other causes, especially as SeaWorld has done a better job of telling its side of the story and getting the word out on its sea rescue operations.

It took a long time, but SeaWorld has now won over Wall Street and Main Street. Revenue has risen 9% through the first half of 2018, reversing four years of declines. Attendance -- and, just as importantly, in-park guest spending -- is on the rise. Folks aren't afraid of telling their friends that they're going to SeaWorld, and they're not flinching at snapping up park merchandise that does the same thing.

The near-term outlook is encouraging. SunTrust analyst Michael Swartz boosted his price target from $30 to $36 after meeting with SeaWorld's new management. He's feeling more confident about SeaWorld meeting its target of as much as $500 million in EBITDA in 2020, fueled by improving momentum and cost savings.

Getting a new ride up and running -- as well as the easier year-over-year comparisons in Florida and Texas after hurricane-related downtime during the third quarter of last year -- will help keep the second half of this year strong. SeaWorld Orlando, the chain's most-visited park, will benefit next year from the makeover of its kid-friendly ride section as a Sesame Street-themed area. The official opening later this week of the country's tallest whitewater raft ride and the return of its updated passholder lounge later this year are just the next steps, but the future is finally bright for SeaWorld Entertainment.