NYU marketing professor Scott Galloway has already made one outlandish Amazon (NASDAQ:AMZN) acquisition prediction -- and it turned out absolutely correct. In early 2017, Galloway argued that Amazon should buy Whole Foods, a deal that was announced just a month later. For what it's worth, the professor had dismissed the call as "just lucky."

Now, Galloway is back with another bold call. 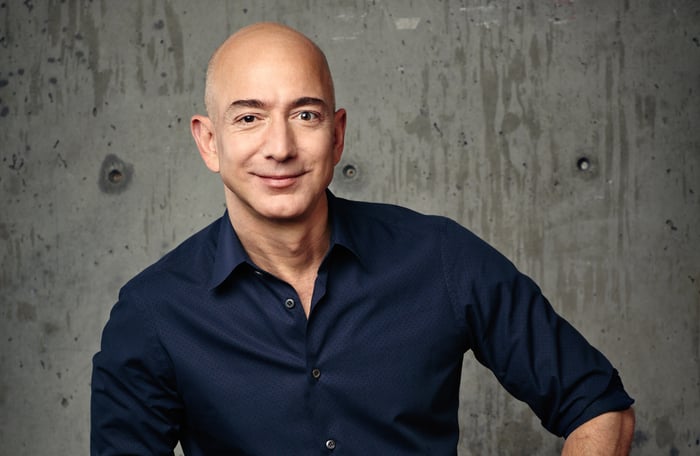 Would Jeff Bezos ever want to get into social media? Image source: Amazon.

In a new podcast by Recode called Pivot, Galloway makes the case for why the e-commerce giant might be interested in scooping up the beleaguered social media platform. Galloway has been bearish on Snap (NYSE:SNAP) for quite some time, and does not believe that Snap can remain independent based on its current trajectory. User metrics and financial results are rapidly deteriorating, and the Snapchat parent continues to allocate resources toward developing consumer hardware for some bizarre reason.

Snap announced a new partnership with Amazon last week, introducing visual search on Snapchat, which allows users to use the Snapchat camera to search for products on the e-commerce site. When the Snapchat camera recognizes an item or barcode, an Amazon card offers to redirect users to Amazon to complete the purchase. Much like rival Instagram, Snap has been testing the e-commerce waters. That could potentially be the justification Amazon would use if it were to acquire Snap, in Galloway's view.

Galloway rules out most other tech giants as potential suitors, and believes Amazon is the most likely acquirer. It's worth noting that Snap's new CFO, Tim Stone, was poached from Amazon, providing a potential line of communication. If Amazon scooped up Snap, Galloway argues that it could "capture a core constituency that gets them traction among high-margin products," noting that teenagers often make irrational purchasing decisions.

While the link between social media and e-commerce is strong, Amazon can pursue those opportunities through partnerships without acquiring Snap.

There would be some benefits and synergies, though. For starters, Snap's ad business is struggling to scale and attract quality advertisers. Amazon's ad business, on the other hand, is killing it. If Amazon took over, it could perhaps overhaul and strengthen the ad business.

If Amazon owned Snap, it would surely seek to transition the latter's cloud infrastructure operations away from Alphabet's (NASDAQ:GOOG) (NASDAQ:GOOGL) Google Cloud toward Amazon Web Services (AWS). Snap is one of the biggest buyers of cloud infrastructure services in the market, opting to completely outsource all hosting operations to third-party vendors -- committing billions of dollars in cloud spending in the coming years.

Google Cloud is Snap's primary provider, with AWS as a backup. Ironically, Amazon would likely still be on the hook to spend that money at Google Cloud if it were to acquire Snap, at least through the contracted period. Then it could transition Snapchat fully to AWS. But then Amazon would essentially be extending its ad business onto Snapchat while powering Snapchat with AWS.

Doing so could help cut costs and improve margins, but why would Amazon pay over $10 billion to do that? Amazon acquiring Snap would be little more than putting lipstick on a pig. I agree with Galloway that Snap is on an unsustainable course and is unlikely to survive on its own, but I disagree that Amazon will be the one to put the company out of its misery.