Graphics specialist NVIDIA (NASDAQ:NVDA) has been one of the hottest-performing chip stocks on the market. On Oct. 4, 2013, the company's shares closed at $15.59. As of this writing, the stock sits at more than $286 per share -- more than 18 times where they were just five years ago. 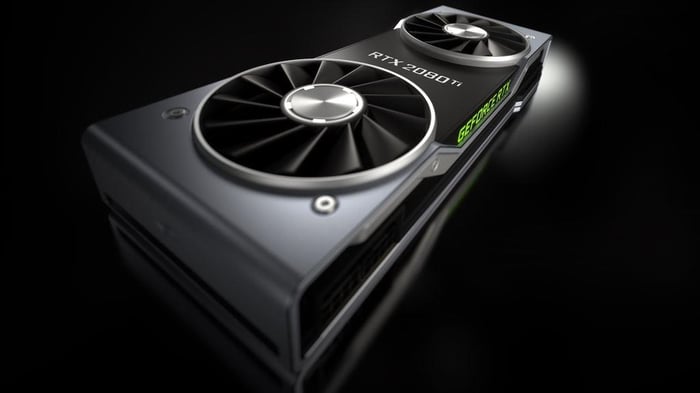 The largest of these businesses is the company's gaming business. If you're looking to understand the basics of that business, then look no further -- you've found the right article.

NVIDIA's gaming business broadly consists of two main product categories. The first -- and by far the most important -- is the company's GeForce gaming graphics processing unit (GPU) business. These GPUs go into both notebook and desktop personal computers, and they're typically purchased by people looking to play graphically intensive 3D games on their computers.

While many computers come with graphics processors integrated alongside the CPU (these are, unsurprisingly, referred to as "integrated graphics processors"), these generally aren't powerful enough to play the newest games at high speeds and with the quality settings turned up.

NVIDIA also sells chips into the Nintendo (OTC:NTDOY) Switch game consoles. These chips aren't stand-alone graphics processors like the GeForce GPUs; instead, they're systems-on-a-chip (SoCs) that integrate a graphics processor along with other important computing elements, like CPU cores. Those chips are branded Tegra.

How big is NVIDIA's gaming business?

During NVIDIA's fiscal year 2018, the company reported that its gaming revenue was $5.51 billion, growing almost 36% year over year. NVIDIA's total revenue that year was $9.7 billion, so gaming represented almost 57% of its overall revenues.

In NVIDIA's most recent 10-K filing, the company said that its total Tegra processor revenue was $1.53 billion. That business, NVIDIA said, "includes SOC modules for the Nintendo Switch gaming console and development services" and "[also] included was automotive revenue of $558 million."

This tells us that the Nintendo Switch was good for a bit under $1 billion in revenue, suggesting that GeForce gaming sales came in at north of $4.5 billion that year.

Performance so far in fiscal year 2019

NVIDIA's is currently in fiscal year 2019, and thus far, the business has continued to grow. During the July quarter, NVIDIA reported that its gaming sales were up more than 52%, with gaming revenue during the first half of fiscal 2019 up about 59.4%.

During the conference call accompanying NVIDIA's second quarter of fiscal year 2019 results, NVIDIA CFO Colette Kress explained that the growth in the company's gaming business "was driven by all segments of the business with desktop, notebook, and gaming consoles all up strong double-digit percentages year-on-year."

The executive also said that "notebooks were standout this quarter with strong demand for thin and light form factors, based on our Max-Q technology." (Max-Q, NVIDIA explains on its website, "is an innovative approach to crafting the world's thinnest, fastest, quietest gaming laptops.")

"All major notebook OEMs and ODMs have adopted Max-Q for their top-of-the-line gaming notebooks, just in time for back to school," Kress said. "And we expect to see 26 models based on Max-Q, in stores, for the holidays."

Kress said during the question-and-answer session of the call that "definitely our gaming and our data center [business units] are expected to grow sequentially."

NVIDIA is set to report its third fiscal quarter results on Nov. 15, 2018.