SurveyMonkey parent SVMK (NASDAQ:SVMK) enjoyed a successful IPO last week, with shares closing out the first day of trading 44% higher than the offering price. SurveyMonkey also announced that its underwriters exercised all of their options, purchasing an additional 2.25 million shares at $12. That was quite a bit of hype for a maker of survey software.

However, investor enthusiasm has chilled in the days since, and the stock has started to come back down to Earth. Here are three reasons to stay away after the pop. 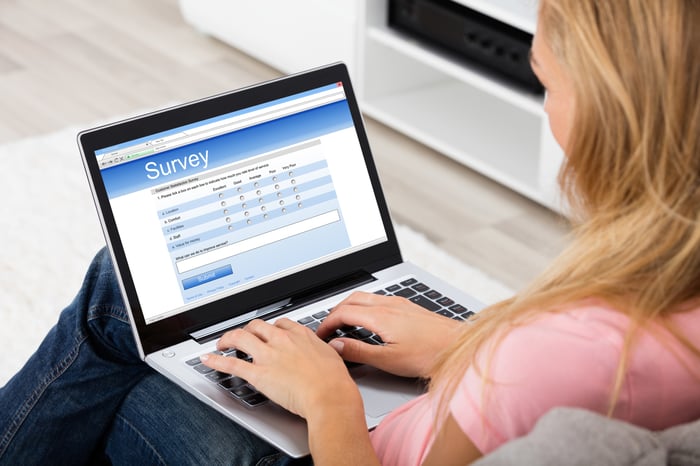 Much of the sales growth has been attributable to higher average revenue per user (ARPU), which SurveyMonkey presents on an annualized basis. For the first half of 2018, ARPU was $400.

SurveyMonkey implemented restructurings in 2016 and 2017 in order to better focus on its core survey platform. Restructuring costs are generally considered one-time events; when excluding restructuring expenses, it's clear that most other operating expenses are rising much faster than revenue growth.

That will make it increasingly difficult to turn out a profit. The company's net loss widened in the first half of 2018 despite sales increasing 14%, for instance.

Making matters worse, SurveyMonkey is also has a heavy debt load, mostly comprised of term loans and revolvers at big banks. In fact, some of the IPO underwriters are also creditors. At the end of the second quarter, SurveyMonkey was carrying $317.3 million in net debt, but intends to use $100 million of the offering proceeds to pay down a chunk of that debt, effectively swapping out debt financing with equity financing.

There will still be $217.3 million in net debt after that. The offering has helped fill SurveyMonkey's coffers and reduced its debt burden, which will also give it some relief in interest expense -- $26.9 million in 2017, or 12% of revenue -- but the company still has substantial debt at fairly high interest rates. SurveyMonkey is paying an effective interest rate of 6.2% to 6.8% on most of that credit facility.

Additionally, that also means the company is subject to restrictive covenants, which could make it harder to secure more capital in the future.