This marijuana stock, the largest by market cap, has been on fire. Here's what investors should know.

Bringing investors up to date, shares of the Canadian marijuana grower have tacked on 2.2% so far in October through Friday the 5th, when they closed at $146.91 per share. This brings their total gain since the company went public at $17 per share on July 19 to a whopping 764%. 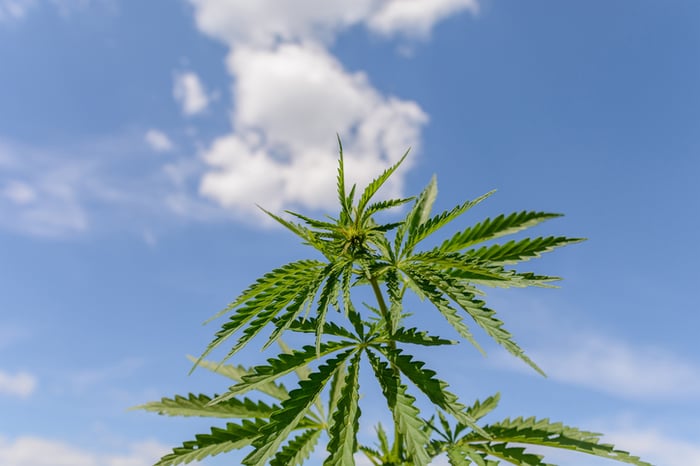 We can attribute Tilray's powerful September performance to several catalysts. First, Tilray is benefiting from a tailwind that's boosting the entire cannabis space: Recreational pot will become legal for adults in Canada on Oct. 17.

Second, Tilray stock has been getting a lift from the belief among some market participants that the company will ink a deal similar to the one that fellow Canadian marijuana producer Canopy Growth (CGC 7.90%) signed with alcoholic beverage giant Constellation Brands (STZ 1.23%). In mid-August, the maker of Corona and Modelo beers revealed it was making a $3.8 billion equity investment into Canopy. The two companies are surely working on developing a line of cannabis-infused beverages. These beverages are expected to get the regulatory green light in Canada next year.

On Sept. 17, Tilray stock jumped 10.2% on a report by BNN Bloomberg TV that Coca-Cola was in discussions with Aurora Cannabis about developing cannabis-infused beverages, as fellow Fool Keith Speights wrote. This gave investors hope that such a deal was in Tilray's near future. You can see this move as part of the huge three-day spike in Tilray's September stock chart. 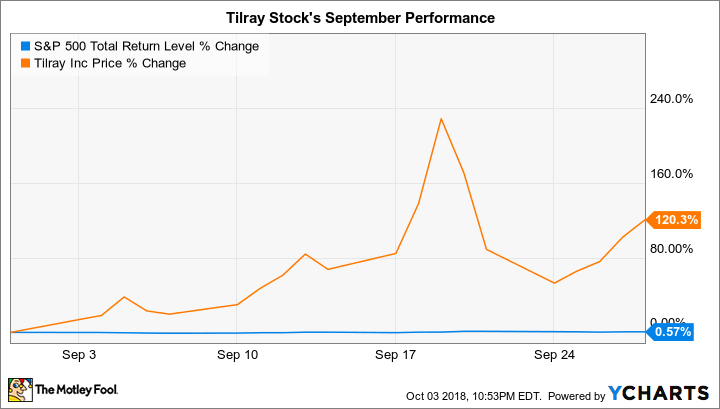 The next day, Tilray stock soared 29% after the company announced that it had received approval from the U.S. government to provide a cannabinoid drug to the University of California San Diego Center for Medicinal Cannabis Research to use in a clinical trial for Essential Tremor. This won't move the needle for Tilray from a financial standpoint, but it does seem to be a nod to the quality of the company's cannabis. Moreover, it shows that cannabis could increasingly find uses in treating more medical conditions.

Then on Sept. 19, Tilray stock rocketed 38.1% after the company's CEO, Brendan Kennedy, following his interview the previous evening by CNBC's Mad Money host Jim Cramer. This interview probably brought the company to the attention of many investors who were unfamiliar with it. Moreover, as one might expect, Kennedy was very bullish about the industry itself and his company's prospects.

As the chart shows, what the market (too easily) giveth, it also often just as quickly takes away. Most of these prices moves were way overdone.

The cannabis industry is expected to experience powerful growth -- and that's before one factors in the legalization of recreational marijuana on a federal level in the U.S., which seems only a matter of time. So, there's likely some attractive long-term investment opportunities in this space.

That said, stock valuations are such that massive growth is already priced in. Marijuana stocks appear to be in a dot-com-like bubble, so investors need to be very cautious.

Currently, pure-play marijuana stocks are for speculative traders, not long-term investors. Investors wanting exposure to the fast-growing marijuana space, but with significantly less risk than pure plays, might consider investing in Constellation Brands.