Graphics-giant NVIDIA (NASDAQ:NVDA) is the dominant supplier of stand-alone graphics processing units (GPUs) into the professional-visualization market. NVIDIA's offerings into this market are sold under its Quadro brand, and, per the company's most recent annual filing, are targeted at "design professionals working in computer-aided design, video editing, special effects, and other creative applications." 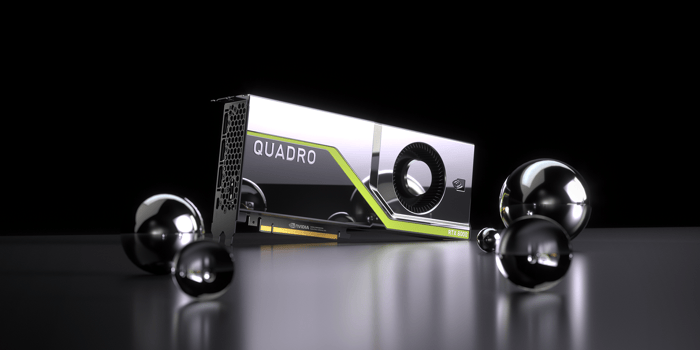 That growth rate pales in comparison to the roughly 40% and 85% respective compound annual growth rates that the company's gaming and data center businesses enjoyed. Nevertheless, the segment still generates a meaningful amount of NVIDIA's revenue and gross profit, so it's important for those interested in NVIDIA stock to be up to speed on the basics of the business.

How big is it?

During NVIDIA's fiscal year 2018, the company reported that revenue from its professional-visualization business rose 12% from the prior year, reaching $934 million. NVIDIA's total revenue during that time was $9.71 billion, so the segment was good for 9.6% of its sales that year.

In terms of revenue, it was also the company's third largest -- a distant third relative to the company's fast-growing data center business and a little more than 20% ahead of the company's OEM (original equipment manufacturing) and IP (intellectual property) business, which includes sales of lower-performance GPUs to computer makers, as well as sales of graphics processors dedicated to cryptocurrency mining.

NVIDIA's professional-visualization revenue grew at a rate of 12% during the company's fiscal year 2018. Its growth was outpaced by every one of NVIDIA's core platforms -- gaming was up 36%, data center grew 133%, and automotive was up 15% -- but it managed to slightly outpace its OEM and IP business, which was up 11% during that time.

Now, fiscal year 2018 was a little while ago -- it ended at the end of January and NVIDIA has since reported results for the first two quarters of fiscal-year 2019. Let's dive into those results.

In the first quarter of NVIDIA's fiscal-year 2019, the company reported that professional-visualization sales grew 22% year over year, to $251 million. While 22% growth is solid, this represented slower growth than the company's overall business. Gaming surged 68%, data center popped 71%, and OEM and IP -- fueled by cryptocurrency growth -- rose 148%, so the segment made up just 7.8% of NVIDIA's sales that quarter.

Then, during the second quarter of NVIDIA's fiscal-year 2019, its professional-visualization segment enjoyed 20% sales growth. Once again, this was slower than the 52% and 83% that gaming and data center, respectively, took in, but it did outpace automotive (up 13%) and OEM and IP (down 54%, as GPU-based cryptocurrency mining has fallen off).

We'll get a look at how this segment performed in the third quarter of the fiscal year when the graphics specialist reports its financial results next month.

Recent developments and the future

NVIDIA recently released a new set of high-end Quadro cards based on its new Turing GPU architecture. The Turing architecture has dedicated hardware built into it to accelerate a type of rendering known as ray tracing, which the company explains, "provides realistic lighting by simulating the physical behavior of light."

I'll be paying close attention to how NVIDIA's professional-visualization business trends in the coming quarters as sales of its Quadro RTX cards -- which the company says "will be available starting in the fourth quarter on nvidia.com" -- ramp up.