London-based luxury e-tailer Farfetch (NYSE:FTCH) went public at $20 per share on Sept. 21, then soared to the low $30s before giving up some of those gains. Let's see why investors were so excited about Farfetch, and whether or not it's worth chasing at these levels.

What does Farfetch do?

Farfetch runs a business-to-consumer marketplace that only sells luxury brands. It provides digital storefronts, inventory management and logistics tools, analytics tools, and other software to merchants. 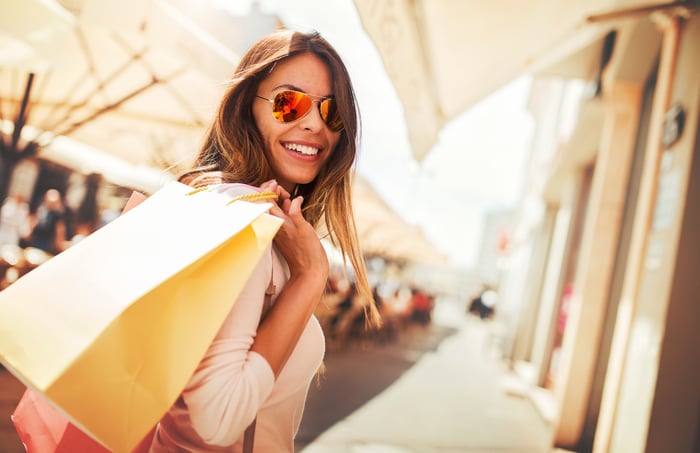 The Farfetch Marketplace allows 980 luxury merchants to reach over 2.3 million customers across 190 countries, which the company calls the world's "deepest pool of luxury consumers." Farfetch says that it offers over 3,200 different brands on its platform. Farfetch generates most of its revenues from a 25% commission per sale from its boutique partners. It generates additional revenues from platform fulfillment shipping and clearing services.

Farfetch also owns Browns, a British fashion and luxury goods boutique. Browns operates two retail stores in London, and is tethered to Farfetch's software ecosystem. The company claims that its ownership of Browns helps it "understand the luxury fashion ecosystem through the lens of a boutique."

What are the tailwinds?

Farfetch believes that it's riding several long-term tailwinds. First, the online supply of luxury goods is fragmented across first-party platforms and wholesale retailers. Pulling all those brands together on a unified platform could be mutually beneficial to Farfetch and its retailers.

Second, many consumers are still reluctant to purchase high-end luxury goods online, possibly due to concerns about counterfeit or damaged goods. However, the online share of the global personal luxury goods market could grow from 9% in 2017 to 25% in 2025 according to Bain & Company as consumers use more trustworthy e-commerce platforms.

Digitally native Generation Z shoppers (born between roughly 1995 and 2009) could also drive that transition. Bain estimates that Gen Z online shoppers accounted for about 85% of the growth of luxury fashion in 2017, and will account for 45% of the market's total luxury spending in 2025.

Lastly, emerging markets like China, the Middle East, Latin America, and Eastern Europe could boost Farfetch's revenues over the next decade. That's why JD.com (NASDAQ:JD), the second-largest e-commerce player in China, acquired a 14% stake in Farfetch for $397 million last year. That stake is now worth about $1 billion.

What are the headwinds?

The revenue that Farfetch generates from its merchants simply can't offset the rising costs of maintaining its marketplace platform. That's disappointing, since Farfetch claims to run a low-cost business model by merely enabling business-to-consumer transactions instead of taking ownership of the products like direct retailers do. However, the $884 million it raised from its IPO could help it scale up its business and improve its margins.

LVMH's online platform is considered a buffer against Amazon, which remains weak in the high-end luxury market due to its marketplace's reputation for discount goods. But if other luxury retailers build similar shopping platforms and undercut Farfetch's commissions, Farfetch's growth could decelerate as its losses widen.

The valuation and the verdict

With a market cap of $7.6 billion, Farfetch trades at 19 times last year's sales. Assuming that Farfetch grows its revenue 50% this year, it would still trade at 13 times this year's sales. Those are lofty valuations for an unprofitable e-commerce platform that faces tougher competition from bigger players.

I'm not saying Farfetch is doomed, and it might be an interesting acquisition target for JD, Amazon, or even LVMH. But I definitely would avoid this stock until its valuations cool off and it narrows its losses.