It's that time of year, when tech giants announce new hardware lineups ahead of the busy holiday shopping season. Apple, Amazon, and Microsoft have all already hosted their fall product events (though Apple might have another in store for this month). Now it's Alphabet (NASDAQ:GOOG) (NASDAQ:GOOGL) subsidiary Google's turn. The search giant just showed off a handful of devices this morning, expectedly headlined by a new smartphone. 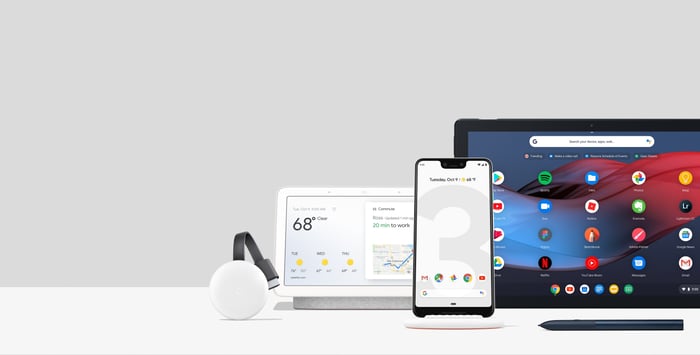 Building on the relative success of the Pixel 2, which earned all sorts of accolades for camera quality, the Pixel 3 and 3 XL are Google's new flagship handsets. They have larger displays (5.5 inches and 6.3 inches, respectively), wireless charging, and are powered by Qualcomm's latest Snapdragon 845.

The phones also feature a new Titan M security chip that is designed to protect sensitive data on the device. Pixel 3 and 3 XL will ship with Android 9 Pie, which includes Google's new Digital Wellbeing app that is similar to Apple's Screen Time. Both offerings hope to mitigate smartphone addiction. Pixel 3 starts at $799 and 3 XL starts at $899. Google is again partnering with Verizon as the exclusive carrier, although the phones can be purchased unlocked directly from Google and work with any carrier.

Google also announced its first Chrome OS tablet, the Pixel Slate, which will go up against Apple's iPad Pro and Microsoft's Surface Pro, all of which are positioned to be laptop replacements. Android tablets have been on the decline for a while, but Chromebooks are taking off, particularly in the education market. Meanwhile, Chrome OS can now support Android apps, allowing Chrome OS devices to leverage that massive catalog of content.

The Pixel Slate features a massive 12.3-inch display and is designed to be used with a separate $200 Pixel Slate Keyboard accessory and/or a $99 Pixelbook Pen stylus. Pricing starts at $599 but goes all the way up to $1,599. Like the Pixelbook that came before it, Google is reaching into premium laptop pricing territory.

Google Home Mini beat out Amazon's Echo Dot in the second quarter, scoring the title of the best-selling smart speaker, according to Strategy Analytics. The search giant is very much a force to be reckoned with now in smart speakers and smart-home technology, which is why it should come as no surprise that it just showed off a new Google Home Hub, a smart speaker that includes a display and is designed to be hub for all your smart-home gadgets.

The Home Hub has a 7-inch display, compared to the 10.1-inch display found on the new Amazon Echo Show or the new Facebook Portal announced yesterday. Unlike the Echo Show or Portal, Home Hub does not have a camera, so it is decidedly not meant for video calling. Google is clearly conscious of the privacy concerns that users have with putting cameras all over their homes, and is looking to avoid them altogether. Home Hub is priced at an aggressive $149.

Google is pushing deeper and deeper into hardware every year, and showing that it can develop and design compelling gadgets across a growing number of product categories within its portfolio. Hardware revenue is still modest and included in its "Google other revenues" segment, which jumped 37% last quarter to $4.4 billion. Hardware revenue will undoubtedly continue to march higher, but it's less clear if hardware will ever become a meaningful -- or profitable -- part of the business.