Shares of Mazor Robotics Ltd. (NASDAQ:MZOR) jumped 20.6% in September, according to data from S&P Global Market Intelligence, after the spinal surgery robotics leader agreed to be acquired by Medtronic (NYSE:MDT).

More specifically, after drifting higher through the first few weeks of the month, Mazor soared on Sept. 21, 2018, when Medtronic announced a definitive agreement to purchase all outstanding shares of Mazor for $58.50 per share. That valued the business at roughly $1.64 billion, and marked a roughly 11% premium from its closing price the day before. 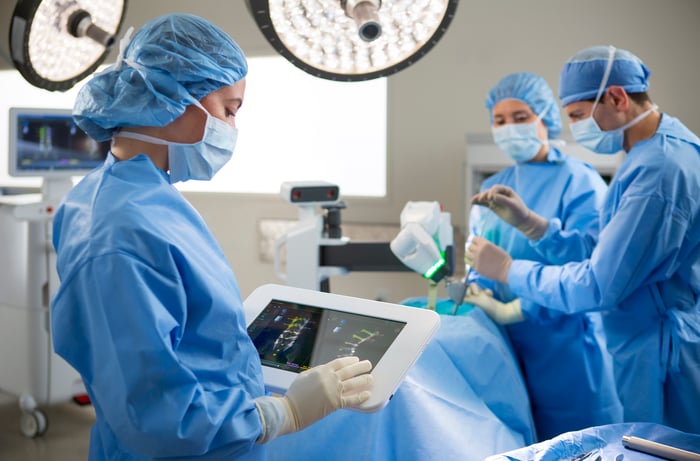 "We believe robotic-assisted procedures are the future of spine surgery, enhancing surgeons' abilities to perform complex procedures with greater precision, consistency, and control," stated Medtronic VP Geoff Martha. "The acquisition of Mazor adds robotic-assisted guidance systems to our expanding portfolio of enabling technologies, and we intend to further cultivate Mazor's legacy of innovation in surgical robotics with the site and team in Israel as a base for future growth."

That's not to say the deal was entirely unexpected. Recall Medtronic already owned a roughly 11% stake in Mazor as part of a strategic partnership through which Medtronic became the exclusive worldwide distributor of the Mazor X system.

Still, the agreed acquisition price may roil some investors, as it's well below Mazor's 52-week high set in March at above $76 per share. And Mazor stock was still reeling from a steep drop in August after the company's second-quarter results arrived well below expectations.

In any case, the acquisition has already been approved by both companies' boards of directors, but still requires the approvals of regulators and Mazor shareholders. If all goes as planned, Medtronic expects the deal will close during its fiscal third quarter ending Jan. 25, 2019. So with shares sitting at roughly $58 today -- and assuming waiting longer to sell doesn't result in more favorable long-term capital gains tax treatment -- I think Mazor shareholders would do well to take their money off the table and put it to work elsewhere.